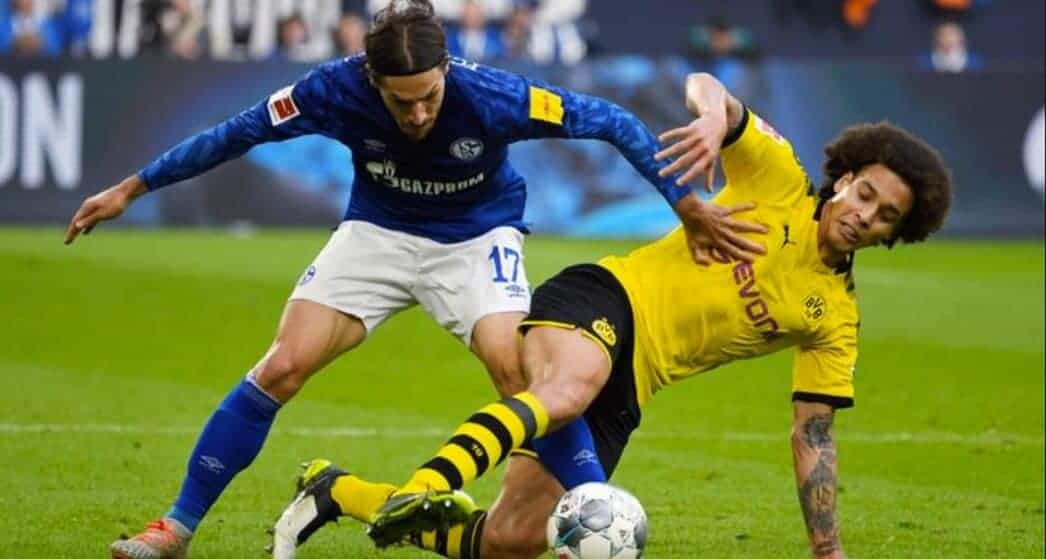 Second-placed Borussia Dortmund play hosts to sixth-placed Schalke at the Westfalenstadion in Dortmund at 19:00 IST on Saturday, May 16.

It’s a match that’s part of the much-awaited return of the Bundesliga after 11 weeks of inactivity due to the Coronavirus and, Belarusian football aside, it’s also the first chance to do some proper football betting in a long, long time.

If you’re in need of a refresher on the league, you can check out our Bundesliga catch-up. Mark your return to football betting in style, rather than returning like a somewhat rusty and out-of-shape footballer!

As ever, we’ve looked for the best possible odds on offer from the best betting sites in order to point you in the direction of the best value you can get ahead of this much-awaited Bundesliga clash.

Dortmund v Schalke odds have the hosts as strong favourites at around 1.55.

The stand-out bet here is that there are over 3.5 goals in the game, available at 2.55 with 10CRIC. It would have paid out in 75% of Dortmund’s home games so far this season and in three of the last four matches between these two sides at the Westfalenstadion.

Elsewhere, you can also get 2.25 on Norwegian starlet Erling Braut Haaland scoring in a Dortmund win with Betway. The former Salzburg man has been in scintillating form with 12 goals in 11 games since moving to Dortmund in January and could be key here.

It was a busy few weeks for Dortmund before the Corona-enforced break.

That was followed by a narrow exit to PSG in the Champions League.

What that European defeat means is that they can fully focus on trying to wrestle the Bundesliga title away from Bayern. And they’re doing a good job of it, winning seven of their last eight to stay within touching distance and knowing that their home game against Bayern in a couple of week’s time is absolutely crucial.

We’ve mentioned Haaland enough already so it’s also worth highlighting the importance of Jadon Sancho, whose pace and trickery on the wing is just as important as the goals of Haaland.

No wonder half of Europe are desperate to sign Sancho. Thorgan Hazard has also been impressive and together they make up an extremely dangerous attacking trio.

But they will miss January signing Emre Can whose muscle and tackling are the glue in Dortmund’s midfield, while Axel Witsel is unavailable, as well.

It’s been an up-and-down season for Schalke under David Wagner but at least they’re trying to play a more attractive brand of football than they did the last season under Domenico Tedesco.

It was an excellent start to the season they had but results have since worsened and they’re currently on a poor run. Part of the problem is a certain absence of star quality with not many players who are capable of producing something special and unexpected out of the blue.

Morrocan 22-year old Amine Harit has been an ever-present in Schalke’s midfield and has contributed a healthy seven goals in 27 appearances this season in all competitions, though the goals have dried up a bit of late.

Another player having a solid season is on-loan Jonjoe Kenny, The English full-back, who belongs to Everton, has combined sound defending with attacking intent and has shown why a lot is expected of him back at the Premier League club.

Where to Bet on Dortmund v Schalke

It’s never easy predicting how the Coronavirus break might affect procedures in a match like this after the Bundesliga has finally returned but we have to assume it’s business as usual.

Schalke do admittedly have a very strong record in this fixture in Dortmund but this is not a vintage side of theirs and they’re up against one in Dortmund with star players who are having an excellent season; that’s why a win for Die Borussen with that man Haaland scoring is one of our two selections.

The best bet of all though is that we have over 3.5 goals. A winner in 75% of Dortmund’s home games this campaign, both sides are far better going forward than defending so we’re pretty confident that one way or another, we’ll get at least four goals here.