After the very best and also very free T20 World Cup betting tips for the England vs Sri Lanka game? Of course, you are. Here you’ll find a summary of how both teams did in their previous match, the likely line-ups for both sides, a pitch report and some good stats.

If you’re looking for the best online cricket satta bazar for the game, you’re about to get it so just keep on reading!

The game takes place at Sharjah on Monday, November 1, start time 7:30 pm IST. Up next are our England vs Sri Lanka betting tips!

Today’s England vs Sri Lanka betting odds have England as red-hot favourites. It’s hard to argue with that. England tick every box in terms of being potential World Cup winners, while Sri Lanka have done ok but should struggle against a fantastic bowling unit and a batting line-up that boasts far more power.

So I simply have to go with England, even at short odds.

There are also online cricket predictions for betting on the toss winner and I’ve picked an England batsman to round things off.

England have been, alongside Pakistan, the best side in the tournament. When they came into it, all the talk was of their explosive batting. But it’s been their brilliant bowling that’s caught the eye so far.

In all three games, they bowled first and restricted teams to sub-par scores that their batters then made a mockery of by chasing with ease.

On Saturday against Australia, it was Chris Jordan doing all the damage with three wickets for very few runs, but Tymal Mills, Liam Livingstone and Chris Woakes all did their bit as well.

In reply Jos Buttler went ballistic but it was under no pressure whatsoever.

It’s hard to find flaws in a side who’s playing so brilliantly but it will be interesting to see how they’ll go about things when they have to bat first.

It’s also true that they’ve only had to chase low totals so far, meaning their middle-order hasn’t been tested yet.

But that’s just splitting hairs because they’ve been absolutely superb so far. They should probably be favourites ahead of Pakistan.

But David Miller, and to a lesser extent Kagiso Rabada, came up with the goods when it mattered with some big-hitting to break Sri Lankan hearts.

Earlier in the piece, Pathum Nissanka hit an impressive 72 off 58 and then of course there was the Wanindu Hasaranga de Silva show.

He’s been one of the stand-out players of the tournament and on Saturday took a hat-trick (across two overs) to put his side in a winning position. In the end, it wasn’t enough.

They’re unlikely to progress from here because England will surely top the group, while all of Australia, South Africa and even the West Indies still have a chance of qualifying.

But they’ve put in some good performances at a time when the team doesn’t really have too many star players. They’ll certainly go down fighting.

140 seems to be the average total here at Sharjah, which is normally chased, that last-ball West Indies win over Bangladesh aside.

Both sides will probably want to chase. Having said that, England would be well-advised to get some practice at batting first because so far they’ve won the toss three times and batted second in all of them.

Here’s our guide to Sharjah if you want to know more about it.

England are 8-4 up against Sri Lanka.

They’ve also won the last six games between them, evidence that England have become better and better in this format and that Sri Lanka have somewhat gone off the boil and aren’t the same side from a decade ago that boasted the likes of Jayawardene, Sangakarra and Muralitharan. 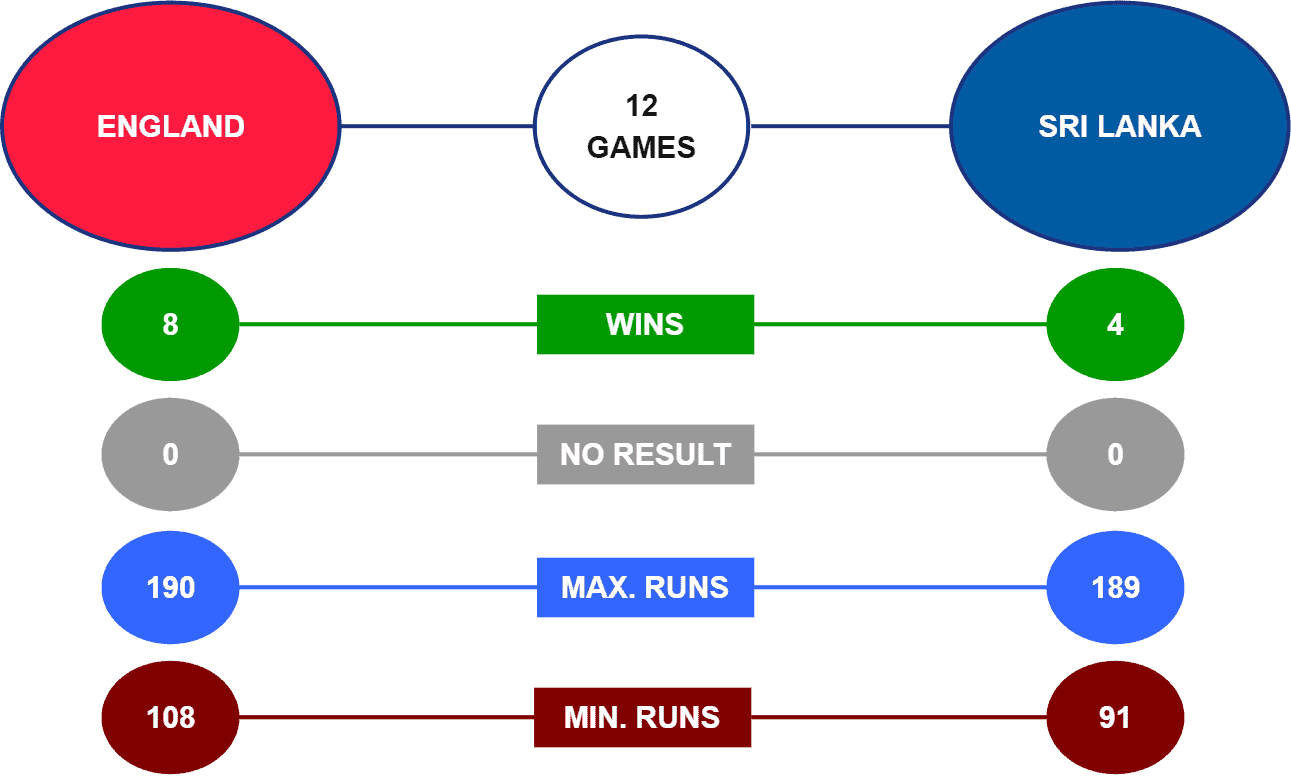 Let’s talk England vs Sri Lanka toss winner statistics. England may be considerably ahead on wins but Sri Lanka have had the better of the toss over the years.

England have won three tosses in a row so maybe it’s time it goes the other way for a change. Go with Sri Lanka.

It’s not much fun going with teams ast such short odds and we’re certainly not going to get rich backing such short-priced favourites.

But Hasaranga de Silva aside, there’s no area where Si Lanka are stronger than England so it really is hard to make a case for the upset.

I guess Sri Lanka’s best chance would be to chase and hope that England’s lack of practice at batting first causes them some problems.

But even then, that looks a tough ask so we just have to go with the heavy favourites.

So far the England openers have shared the top batsman award with Jos Buttler having two wins and Jason Roy one.

That’s not surprising. In each case, they’ve chased low scores meaning that the openers have scored most of the runs and not given anyone else a chance.

A repeat of that with England chasing again could lead to a very similar scenario.

Buttler is around the 3.3 mark and Roy is 4.2 so it makes sense to go with the bigger price when there’s little to choose between them.