Quite frankly, it’s been a mismatch so far this Series but the 3rd t20i between England and Sri Lanka at Southampton on Saturday, June 26, start time 07:00 pm IST, does at least provide some good cricket betting opportunities, particularly in the side markets.

England have proved to be the stronger side in every department over the first two games and it’s now up to Sri Lanka to show they can at least secure one win in the Series, even if it;s too late to actually win it.

The best live cricket satta rates for the game are up next, as well as expert England vs Sri Lanka betting tips.

Our free online cricket betting tips for Indian players are up next and we’ll explain to you how to side with England, but not from the start.

We also have tips on the toss winner and who can top score for Sri Lanka with the bat.

Jos Buttler missed out with a small injury last time, paving the way for Sam Billings to come into the side as a middle-order batter, rather than wicket keeper/batsman.

That in turn meant Jonny Bairstow not only took over the gloves from Buttler but also opened the innings.

As it happens, Bairstow got out for a duck but it shows how England not only have lots of top order players of considerable quality but that they can also shift them around in terms of where they bat.

In the process, Chris Woakes missed out because apparently he can’t handle playing two games in two days so there was a good return to international duty for David Willey, who went for just 17 runs off four overs, despite not taking a wicket.

But the player who really impressed was man-of-the-match Liam Livingstone. With the ball, he was extremely economical, conceding just 10 runs off two overs. With the bat, his calm and mature 29 off 26 was just what his team needed after a poor start in the chase.

Buttler is now out of the ODI Series as well as this last match so the top order may be similar to what it was the last game. But Moeen Ali might get a game.

If they carry on being this ruthless, it’s not hard to see why England are second-favourites to win the upcoming T20 World Cup.

This is a side in a real mess. Yes, it’s always hard to play in such alien conditions as what they’re finding in England: the polar opposite of what they’re used to back home.

But that’s just part and parcel of international cricket and if you can’t deal with that side of things, then you’re not going to win many matches away from home.

To be fair to Sri Lanka, they actually did a good job of putting a bit of pressure on England with the ball. On another day, the hosts could easily have chased that total with about 8 overs to spare without losing a wicket. So credit to Sri Lanka that they actually got five batsmen out.

But the game had been lost long before. Whatever the conditions, it’s just not acceptable to post 111/7 in a T20I game. It’s all well and good saying there are a few too many youngsters but what about Kusal Perera and Kusal Mendis?

Yes, they were te two top-scorers with 21 and 39 respectively but look at their strike rates:  extremely pedestrian at 84 (Perera) and 100 (Mendis).

Despite all this, they may well field the same side again because they don’t really have anyone better to bring in.

We head to Southampton for this one, the venue of that brilliant Test match in the final of the WTC between India and New Zealand earlier this week.

England have played seven T20Is at the Rose Bowl and won five of them.

The exceptions being a win by Australia in September 2020 and a win in 2006 for…Sri Lanka.

Chasing 163, England were going well with Marcus Trescothick at the crease on 72 before a horrible batting collapse cost them the game, eventually losing by two runs. Mind you, that was a long time ago.

When England played Australia in a three-match Series just under a year ago at this ground, the first innings scores were 162/7 by England (they won by two runs), 157/7 by Australia (England chased it with 7 balls to spare) and 145/6 by the hosts, which Australia chased with three balls to spare.

So 160+ will certainly be seen as a good score batting first.

Things were pretty tight between these two at the start of the Series at 8-7 to England but with these two wins, it’s now 10-7 to Eoin Morgan’s men.

As we said at the start of the Series, when Sri Lanka have a strong side there’s not much to choose between them. But when they rock up with a below-par squad in English conditions, it really is a bit of a mismatch. 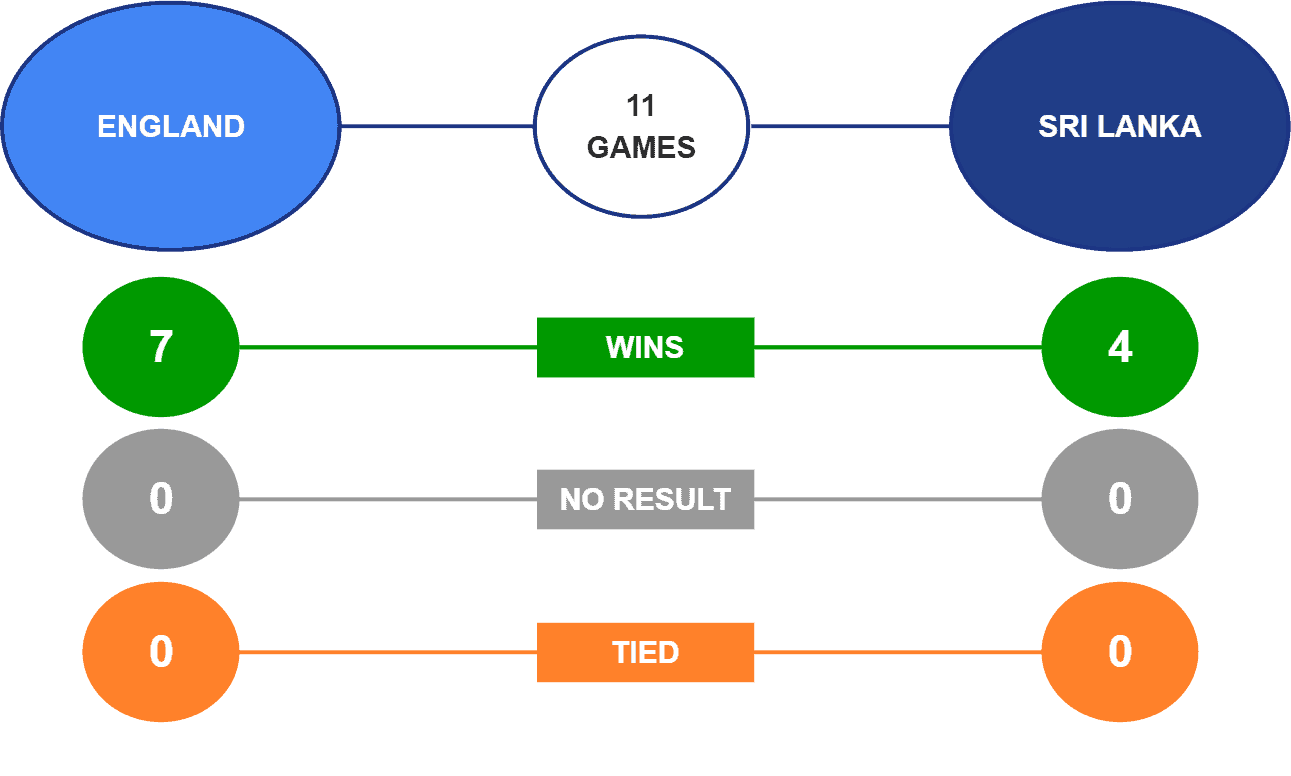 Say what you like about Kusal Perera and his batting or captaincy but the man knows how to win a coin toss.  He’s won both so far and we’re sticking with him to do the business once again.

Below are the England v Sri Lanka toss winner statistics over the years.

Recommended Bet: Back England to win @ 1.5 or greater in live betting with Betway

Ahead of the first game, we had a strategy of trying to back England at odds of 1.8 on live betting if they made a poor start to the game. The theory being that they’re by far the better side so could recover to go on and win the game.

The problem was that they were never in enough trouble to reach odds of 1.8. The bookies would have needed to have seen England in far more bother than that to have given you 1.8.

So our strategy needs to be a bit more conservative this time: we’ll back England in live betting at 1.5 this time.

Recommended Bet: Back Dasun Shanaka to top score for Sri Lanka @ 12.00 with 10 CRIC.

Sri Lanka’s batting has been a shambles so far. Just look at those two first innings totals: 129 and 111. Both of them were at least 30 runs short of anything decent.

So with no-one taking the chance to post a big score from among the top order, it might be worth going with a big-priced middle-order batsman.

Step forward Dasun Shanaka, who scored 50 off 44 in that first match to top score for his side and may have to perform a similar rescue act here. He can certainly score quickly when in the mood and 40 here may well be  enough to win this.

At the current odds of 12.0, he’s certainly worth chancing.

Let’s round things off with some interesting status before it all gets under way.