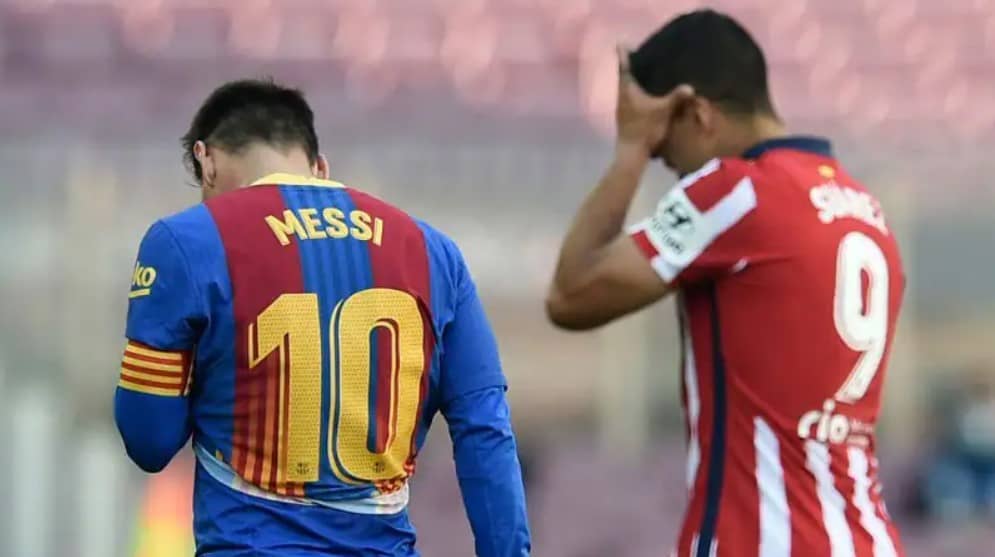 The football action across Europe’s top leagues is coming to an exciting end. The La Liga race is wide open with four teams still in contention. Meanwhile, in the Premier League, Manchester City were forced to wait for their title celebrations a bit longer.

As things stand, Atletico Madrid lead the La Liga table with 77 points, followed by Real Madrid at the second and Barcelona at the third with 75 points each. Sevilla are trailing at fourth place with 71. All teams have played 35 games so far.

Last weekend saw Barcelona and Atletico fight to a stalemate, goalless draw. A win for the Catalans would have leapfrogged them to the top while a win for Atleti could have seen them extend their lead by a good margin.

That draw also created a good opportunity for Real Madrid to shake things up and become the league leaders. But Zinedine Zidane’s men were held to a 2-2 draw by none other than Sevilla.

All things considered, the top four teams got a point each over the weekend.

With just three matches remaining, the race is anyone’s to win. All teams will need to win their remaining fixtures to stay in the race while Atletico Madrid will need to avoid a result that doesn’t give them the full three points.

Barca will face mid-table teams like Celta Vigo and Levante while Los Galacticos find themselves facing Granada and Athletic Bilbao. As for Atleti, their rivals are the fifth-placed Real Sociedad and Osasuna.

What’s Happening in the EPL?

Manchester City lead the table comfortably by 10 points with 35 games in. They are trailed by their arch-rivals Manchester United, who are at second with 70 points and a game in hand.

Chelsea come in third with 64 points.

Theoretically, United can still win the EPL by winning their remaining four games and hoping that City lose their remaining fixtures too. This, of course, is easier said than done and if it happens, it will send the football betting world in a frenzy.

So in all likelihood, City will win the league; it is just a matter of when.

United beat Aston Villa 3-1 over the weekend after making a second-half comeback. A defeat or a draw there would have meant party time for Manchester City boys, who lost their own chance to win the title early after losing to Chelsea 2-1 at home.

City’s remaining fixtures are against Brighton and Newcastle from the bottom half of the table, and against the eighth-placed Everton.

What about Bundesliga and Serie A?

Inter Milan won the Serie A earlier this month when the second-placed Atalanta squandered their chance to keep the pressure on the Nerazzurri.

That marks the first top-flight Italian football league title for Internazionale in over 10 years; their last Serie A trophy came in the 2009-10 season. The team has thrived under Antonio Conte who successfully oversaw the end of the Juventus era, who had won the league nine consecutive times before falling out of the race this season.

Moreover, Juventus are on the verge of missing the Champions League spot for the next season.

Meanwhile, in Bundesliga, Bayern Munich were declared as the champions for the 2020-21 season with three games to spare in early May. Munich won their 31st German Championship overall. It was also their record-extending ninth consecutive Bundesliga title.

It is also worth mentioning that RB Leipzig look primed to finish in second place although, Wolfsburg and Borussia Dortmund chase them by a handful of points.