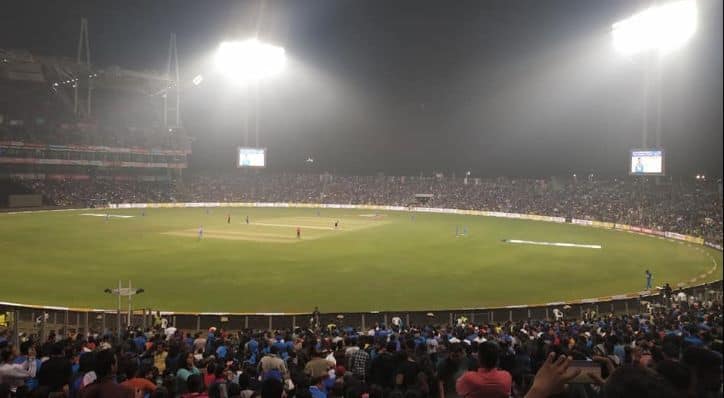 The excitement surrounding the beginning of this season’s Indian Premier League continues to build after competition officials announced the IPL fixture list.

Defending champions Chennai Super Kings take on the Mumbai Indians to get things underway in a repeat of last year’s final. The opening IPL game will begin at 3.30 (IST) on Saturday 26th March at the Wankhede Stadium in Mumbai.

IPL 2022 Schedule
What Are The Top Three Stand Out IPL Fixtures?
IPL 2022 Stadiums

There are 74 matches in this year’s tournament – including 70 league games and four playoff matches. Rulemakers had to alter the scheduling make-up to create room for two new teams entering the fray this year in the Gujarat Titans and the Lucknow Super Giants. You can find the full breakdown of how the two new teams will impact the tournament format by clicking here.

The venues for the playoff matches have yet to be announced, but we now know which team will be playing where and when across the duration of the regular season – giving plenty of time for cricket punters searching for the best live cricket satta rates before the season begins.

What Are The Top Three Stand Out IPL Fixtures?

Now we know the fixture list, the head immediately turns to the most eye-catching IPL contests. Which are the games with scintillating subtext? Where are the grudges? Any personal scores to settle?

Here are my top three clashes to keep an eye on:

Last year, these two franchises engaged in two classics – with each game going down to the final ball. The Royal Challengers Bangalore came out on top on both occasions, inflicting two of the four defeats the Delhi Capitals suffered in the regular season.

In the first match, the Capitals needed six from the final ball but captain fantastic Rishabh Pant couldn’t get the job done, hitting a four from the last ball rather than clearing the rope as required.

In the second game, the Royal Challengers needed 15 from the final over and six from the last ball to come out on top – but delivered the goods all the same thanks to Srikar Bharat.

The Capitals need to exact revenge – it will be intriguing to see how they approach the fixture. Here’s hoping for more tight finishes and roller-coaster rides.

I have earmarked this game because it’s a clash of the two pre-tournament favourites, and an early win in the second game of the competition could set an important precedent for both the Mumbai Indians and the Capitals.

The teams shared a win apiece in this fixture last season – with both games proving low-scoring affairs.

I am anticipating more runs this time around.

It would be remiss of me not to include a showdown between the two most successful clubs in this competition. The Mumbai Indians have won five titles to the Chennai Super Kings‘ four.

However, the rivalry is even more profound – the skipper for the Indians is Virat Kholi and the captain for the Super Kings is MS Dhoni, two modern-day Indian cricketing greats. In a world where fans are as supportive of players as franchises, it ignites many a debate. Which skipper was better? Who was the superior batter? Who would you rather close up an innings? It’s like the Messi vs Ronaldo debate – you will always have split opinions.

I always look forward to this contest – here’s hoping it lives up to the billing.

To deal with the spectre of Covid-19, organisers have limited travel to two Indian cities – with three venues in Mumbai and one in Pune.

Check out a brief look at all four below.

The Wankhede stadium is the home of the Mumbai Indians and will host 20 matches in the tournament’s group stage. The ground has a rich history stretching back to 1974, and many consider it the home of Mumbai cricket. It can house up to 33,108 spectators.

A modern venue designed by world-renowned Indian architect Hafeez Contractor, the DY Patil Stadium was chosen as the host for the inaugural IPL final between the Rajasthan Royals and Chennai Super Kings. The DY Patil Stadium will also host 20 matches.

A historic venue built in 1937, the Brabourne stadium has the distinction of being India’s first permanent sporting venue.

Another Mumbai stalwart on the city’s cricket scape, the Brabourne Stadium is pencilled to host 15 matches of this year’s IPL.

Ploughing a lone-furrow outside the city bounds of Mumbai is the MCA Stadium in Pune. The MCA is another modern stadium, constructed in 2007, built to support India’s burgeoning sporting industry.

The stadium will host 15 IPL matches.