Manchester City will take on a distraught Arsenal in the English Premier League this weekend.

This is expected to be a one-sided affair featuring plenty of football betting opportunities – some back City and others pitting Arsenal to lose.

Manchester City found their winning ways last weekend with that energetic win over Norwich City. Meanwhile, Arsenal incurred yet another defeat – this time to Chelsea.

Given the form woes and squad issues that the Gunners are facing at the moment, Manchester City make for the far obvious bet here. 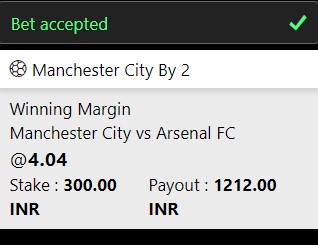 Pep Guardiola continues his pursuit for a full-fledged striker with Cristiano Ronaldo now emerging as the next probable signing – imagine if that happens.

In the meantime, there are matches to be played and if last weekend is any indication, they can do just fine without a new dedicated goalscorer for now.

In the second half, Aymeric Laporte, Raheem Sterling, and Riyad Mahrez ran riot with a goal each. Gabriel Jesus had two assists to his name and is likely to be a key playmaker for his side this season. Overall, City enjoyed 67% possession with 16 shots (four on target).

As for player availability, Kevin de Bruyne may mark his return on Saturday while the likes of Jesus and Grealish are expected to retain their places in the starting XI. There is clearly no shortage of talent in Manchester City’s roster, especially in the substitutes.

For this game against Arsenal, City hold all the cards and anything but a win is simply unacceptable. They have a solid lead in the head to head tally, in addition to a very discernible home advantage and a powerful squad.

Arsenal have spent upwards of £125 million in the summer transfer window but the fact that they are yet to win a match – or even score a goal – tells all there is to know about the state of the Gunners.

In their defence, Mikel Arteta had to make do with a depleted squad hit by injuries and the coronavirus. They hosted Chelsea last weekend at the Emirates Stadium and lost 2-0 in a game that did not feature their star player Alexandre Lacazette, among a few others. Having lost the opening match to Brentford by the exact score, the visitors will look to avoid a similar fate in Manchester.

But going by their mid-week performance in the EFL Cup where they thrashed West Bromwich Albion 6-0, there is some hope. Pierre-Emerick Aubameyang scored a brilliant hat-trick while Martin Odegaard left his mark in the match. Arsenal fans will be buoyed by that success and hope their boys can pull something close (or close to it) this weekend.

However, Arsenal are placed 19th in the Premier League table at the moment, Arteta is under pressure to deliver. Going by the rumour mills, he has until October to show some results or the former Arsenal man may very well be out of a job.

To exacerbate the matters, their record signing Ben White is unavailable for the match due to injury while Willian is looking to leave the London club in this window. That said, Laczette and Pierre-Emerick Aubameyang may appear in the starting XI on Saturday, giving Arsenal a huge boost in the attacking department.

But the fact remains that Arsenal have not beaten City in the Premier League in the last five seasons.

But looking purely at the last decade or so, it is City who have enjoyed the matches more and made significant leaps to close the gap in their head to head tally with the Gunners.

Recommended Bet: Back Manchester City to win @ 1.25 with 10CRIC

This one is more or less a no-brainer – City have the home advantage, a fit squad that is firing on all cylinders, and more importantly, they have the psychological advantage over Arsenal.

Things should get better for them with the return of Kevin de Bruyne to the squad.

But this isn’t to say that Arsenal won’t put up a fight. As they say, the third time is the charm and in this match, we may see some fight from the visitors. But at the end, it is Manchester City who are more likely to come out as the victors.

Jack Grealish to be Anytime Goalscorer

Recommended Bet: Grealish to be anytime goalscorer @ 2.65 with Betway

Grealish may have a poor track record against Arsenal from his years at Aston Villa but following his revival in the Euro 2020, he is an entirely different player.

Even though it’s too early to tell at the moment, he seems to be doing well at Manchester City. Having scored his first goal for the club last weekend, it is not too far fetched to imagine him score this weekend too.

Whether Arsenal score or not, City are likely to score a good few in this match. The reason why I’m calling it is because of Arsenal’s shaky form, lack of confidence, and just the fact that City’s forwards are having a much better time.

While their last couple of EPL games haven’t seen that many goals, this one has all the makings of being a high goal-scoring affair.