The English Premier League kickstarts this weekend with Manchester United set to play Leeds United in their opening match.

This is going to be an absolute thriller of a match featuring football betting opportunities.

There is no doubt in anyone’s mind that the Red Devils will start this match as the favourites. Playing at Old Trafford gives them the obvious home advantage and there’s also the fact that they have not lost a match to Leeds since 1-0 defeat in FA Cup 2010.

Like for like, Ole Gunnar’s men are superior to that of the Peacocks, giving us all the more confidence to back them to win this game. 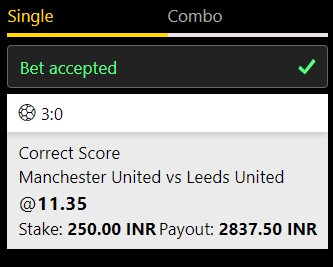 Manchester United finished 2nd last season in the Premier League, 12 points behind their arch-rivals Manchester City. The season also saw them become the Europa League runners-up, thus extending their wait for a winner silverware to over four years now.

That said, Ole Gunnar Solskjaer has reinforced the team this year with the new signings of Jadon Sancho and Raphael Varane. However, both of them will be unavailable for Saturday’s fixture as they joined the training only this week.

But a string of impressive performances in the pre-season friendlies has already pegged the Red Devils for a strong start to the season. They are heading in this match after a 4-0 whitewash of Everton last weekend at home – a game that saw Harry Maguire, Mason Greenwood, Bruno Fernandes, and Diogo Dalot add their names to the goal sheet.

Man United don’t face a real threat until mid-October when they take on Leicester City followed by other big clubs like Liverpool and Spurs. They have got quite a bit of time and plenty of good opportunities ahead of them to get their ducks in a row and position themselves as prime title contenders.

For Saturday’s game, they will be without the services of first-team players like Marcus Rashford, Alex Telles, Jesse Lingard, Phil Jones, Dean Anderson, Eric Bailly, and Amad Diallo. Edinson Cavani is also unavailable as he enjoys an extra few days of vacation.

Leeds United FC marked their return to England’s top-flight football only last season after a wait of more than 15 years.

All things considered, they put up a commendable fight with a 9th place finish in the table with 59 points, trailing Tottenham Hotspur by three and Arsenal by two.

The fact that Marcelo Bielsa’s side were just six points shy of a Europa League appearance this year is an impressive feat in itself.

Plus, in the final stages of the Premier League last season, they lost just one match in the 11 played while drawing against the likes of Liverpool, Man United, and Chelsea. Their 2-1 win over Manchester City and 3-1 win over Spurs is also worth mentioning.

Clearly, this is a team that is not to be underestimated but if we’re to look at their pre-season friendlies results, it tells us a different story.

The Whites have lost four friendlies since July-end to Fleetwood, Real Betis and Ajax (twice). Last weekend, they played Villarreal and held their own with a respectable 2-2 draw.

As for their player availability, Leeds United will have to make do without Diego Llorente, Junior Firpo, and Jamie Shackleton for this game.

The two teams have met 109 times in all competitions – Manchester United, not so surprisingly, lead 47-26 with 36 matches ending in a draw.

United won the home leg 6-2 last season while in the away leg, they were held to a goalless draw.

Recommended Bet: Back Manchester United to win @ 1.56 with 10CRIC

Even though Manchester United will be without a lot of their main team stars, they have sufficient talents in their ranks to get the job done against Leeds.

They are in good form and good spirits – add to this the fact that they have a near-flawless record against their opponents in recent history, the picture becomes all the more clearer. Moreover, Old Trafford will most likely be packed to the brim with well over 70,000 home fans expected to attend this opening Premier League match.

The conditions are ripe for them to start their EPL campaign on a solid note although, Leeds will do everything in their power to make things difficult for the boys.

Bruno Fernandes to be Anytime Goalscorer

Recommended Bet: Fernandes to be anytime goalscorer @ 2.10 with Betway

Bruno Fernandes was United’s top goalscorer last season with 28 goals. He is a key component in United’s goal-scoring engine and his goal against Everton last week tells us the kind of form he is in at the moment.

Given the chances of him scoring and the odds at which he is available, he certainly makes for an appealing bet here.

Even though I’m backing Manchester United to win this match 3-0, there is a very real possibility that the end result may be 2-1 or something along those lines.

Whatever may be the case, this game is likely to see many goals – possibly from both sides too. After all, both Leeds and Man United have seen over 2.5 goals in their last five matches – there is no reason why it may not be the same case again.