The Royal Challengers Bangalore (RCB) were on the wrong side of a high-scoring thriller in their opening game and will look to bounce back with a win over the Kolkata Knight Riders (KKR), who were mightily impressive in their defeat of the Chennai Super Kings on Saturday.

I have been analysing the live cricket satta rates to find the best Royal Challengers Bangalore vs Kolkata Knight Riders betting tips.

Looking for some IPL betting suggestions? Keep reading below to find all the stats, need-to-know news, and predictions ahead of the clash, which gets underway at the Dr DY Patil Sports Academy in Mumbai from 7.30 pm on Wednesday 30th March.

Despite the differing fortunes in both of the sides’ opening day results, I am going to side with the RCB to get off the mark as part of my free cricket betting tips.

They were heavy favourites throughout their defeat to the Punjab Kings – it took some serious hitting from the talented Odean Smith to prevent them from claiming the win. You can find all of today’s IPL betting odds below:

Recommended Bet: Back the RCB to win at 1.7 with Pure Win

A win prediction in the IPL is never simple – but I have my reasons for picking RCB as the match winner.

The KKR were ruthlessly efficient in dispatching defending champions CSK on Saturday. Restricting them to just 131 runs, the KKR waltzed home with six wickets and nine balls to spare.

However, the conditions fell for them perfectly – and choosing to field first after winning the toss was an important decision in the context of the game.

Then you have the manner of RCB’s defeat to the Punjab Kings on Sunday. They were in front of the game situation for most of the match – hitting 205/2 from their 20 overs before reducing them to 156/5 with just five overs to go.

That’s why, as part of my match prediction, I will be placing a confident wager on RCB to win. Were it not for the performance of Smith, we would be praising them on the all-round strength of their display.

I will make my bet with Pure Win – a leading Indian online betting site. Before you back your betting prediction with them, you can get an in-depth analysis on how they operate by checking out our Pure Win review.

Recommended Bet: Back Mohammed Siraj to be top RCB bowler at 4.5 with 10CRIC

It feels odd to put Siraj forward as my Hot Bet, particularly after his wayward performance on Sunday. The pacer did claim two wickets, but they came at a huge cost – posting match figures of 2/59 from his four overs at 14.75 per over. His first set of six deliveries included 10 wides – warping those figures somewhat.

He is a bowler that can make things happen, though! Fast and aggressive, Siraj has a fiery personality to match.

In this fixture last season, he claimed 2/19 from his four overs, and I can see him adding to his tally of two wickets for the 2022 campaign.

I will be placing my Royal Challengers Bangalore vs Kolkata Knight Riders Hot Bet with 10CRIC – they are my go-to betting site for all individual player bets and other pre-match and in-play specials.

You can find out more about 10CRIC by reading our full site review.

So, we have established that a first-day defeat isn’t anything to be too concerned by! The Royal Challengers Bangalore hammered more than 200 runs thanks to sparkling individual knocks by Faf du Plessis (88) and Virat Kohli (41*) and were also impressive with the ball until Odean Smith got stuck into them.

Indian betting sites aren’t perturbed by their performance either – all have Royal Challengers Bangalore vs Kolkata Knight Riders betting odds favouring the former.

The one concern may be their failure to kill off the game when it was in their grasp. I think they will have enough to get the job done on Wednesday.

They remain without the Aussie international duo of Jhye Richardson and Josh Hazlewood through international duty, while middle-order maestro and occasional twirler Glenn Maxwell is enjoying a break to get married.

There are no new injuries to report from the game on Sunday.

There were a few eyebrows raised in the pre-season when Virat Kohli announced he would be handing over the captaincy to his “great friend” du Plessis. How would the South African fare in the role? Is he strong enough to lead an ego-heavy dressing room? Would his personal form suffer?

The initial signs are all positive. He played phenomenally in his knock of 88 from just 57 balls and led with clarity throughout.

I was surprised to see him open the batting – but if he’s to stay there, I think he could be a good bet to top-score for the RCB every game. This time you can back him at 2.87 to top score for the RCB against the KKR with Betway.

The Knight Riders will be hoping all of their games continue in a similar vein – they made it look all too easy in defeating defending champions the Chennai Super Kings.

They restricted them to just 131/5 – only an undefeated MS Dhoni 50 saved the CSK from an even lower total.

Any fears the pitch would hinder the chase were put to bed early by a fine start from the KKR’s opening pair of Ajinkya Rahane and Venkatesh Iyer put on 43 runs from 6.3 overs to set them well on their way to a comfortable victory.

It doesn’t get better than that for new skipper Shreyas Iyer – a comprehensive victory over the defending champions on your debut as skipper!

Aaron Finch awaits for this KKR debut – the replacement for Alex Hales remains away with Australia on international duty and will miss the game on Wednesday.

There are no new injuries to report from Saturday’s game.

He did not take any wickets, but Sunil Narine’s contribution was arguably the most telling in this match. Taking advantage of the dew factor, Narine bowled four overs for just 15 runs at 3.75 per over – strangling the CSK batsmen and creating the environment for a manageable chase.

Another performance of that ilk here will eke him into Player of the Match contention. Given he is capable with the bat too, I will have an outside dabble on the West Indies star to finish man of the match at 12.0 with Betway.

The Dr DY Patil Sports Academy in Mumbai hosts its second IPL match of the season. It looks to be the venue with the most run-scoring potential so far in this year’s tournament – with more than 400 runs scored between the CSK and the PBKS here on Saturday.

I am anticipating more high scoring action here! The weather is typical for this time of year in Mumbai – very warm and humid.

The Royal Challengers Bangalore vs Kolkata Knight Riders head to head advantage lies firmly with the latter – with the KKR winning 16 to the RCB’s 13 games.

The KKR hold the record for the longest winning streak (14) in the IPL by any team, so it’s surprising to see it isn’t a wider lead – particularly against a franchise that is yet to win the tournament.

The KKR are searching for their third straight win over the RCB after winning both fixtures last season. 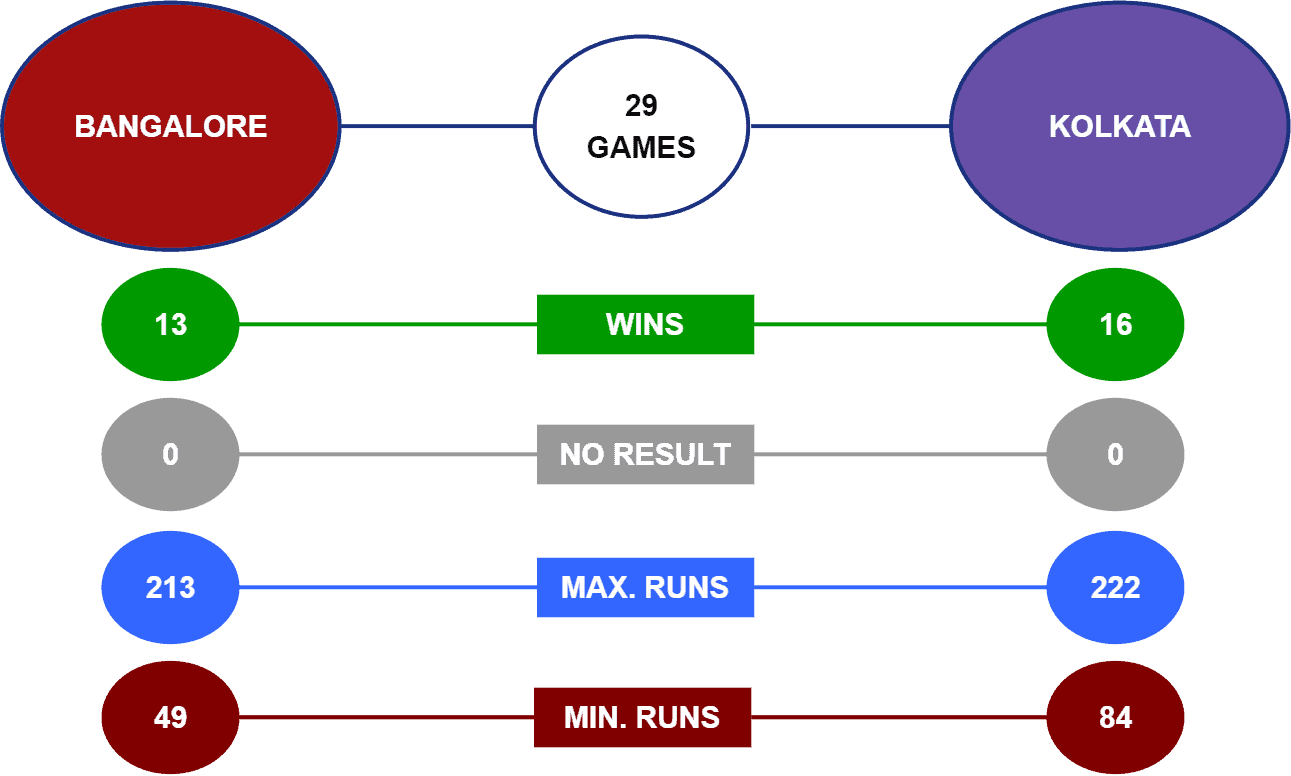 While the KKR dominate the head to head standings, their adversaries come out on top in the battle of the flip.