Another match to look at in terms of T20 World Cup betting as the preliminary stage continues. That means we’ll have some analysis of the teams, a look at their likely XIs and some stats, to go with our chosen bets for anyone interested in online cricket betting at Indian sites!

Let’s move on to Bet India’s free expert cricket tips for betting on this one. The Scots are 4-0 up in the head to head and I’m about to tell you why that could quickly become 5-0 against a side fresh from a real hammering.

I’ll also tell you who you should bet on when it comes to the toss.

Scotland produced the first upset of the tournament. They were around the 5.0 mark to beat a Bangladesh side eight places above them in the ICC rankings: they’re 14th, Bangladesh sixth.

It was a good lesson in how T20 cricket can often come down to just one player: all-rounder Chris Greaves hit 45 off 28 from number seven to make the game competitive.

And then with the ball, he made it more than competitive: he took 2-19 off three overs to win them the game.

So they have Greaves to thank for that famous win but must be worried about their batting other than him. Numbers two to six scored just 18 runs between them.

The first match was a rude awakening for PNG.

A score of 129 may have seemed like it could be competitive on a tough wicket.

That they got even that was almost purely down to an excellent 56 off 43 from captain Assad Vala, though there was also a good 37 off 26 from Charles Amini.

But Oman chased that without losing a wicket. We suspect there’s a huge gulf in class at least in terms of bowling between PONG and the other sides here.

But of course, we’ll have to wait and see how they perform in at least one more game before drawing too many conclusions.

We’re at Al Amerat for this one. So far, two matches have been played there as part of the qualifying tournament.

In the first, Papua New Guinea scored 129 and it wasn’t nearly enough with Oman chasing it without losing a wicket. In the second, Scotland’s 140 was six too many for Bangladesh.

So what can we interpret from those results? We still think chasing is the way to go here despite Bangladesh not pulling it off against Scotland.

You’d think 140-145 is a competitive score but like we say, both sides will probably want to chase. Check out our Oman Cricket Academy betting guide for more on this venue!

Scotland and Namibia have faced off against each other only 4 times in the past. What’s more, the Scots have managed to win all 4 of these games! There’s no prize for guessing why I’m going for them to win their fifth in a row! 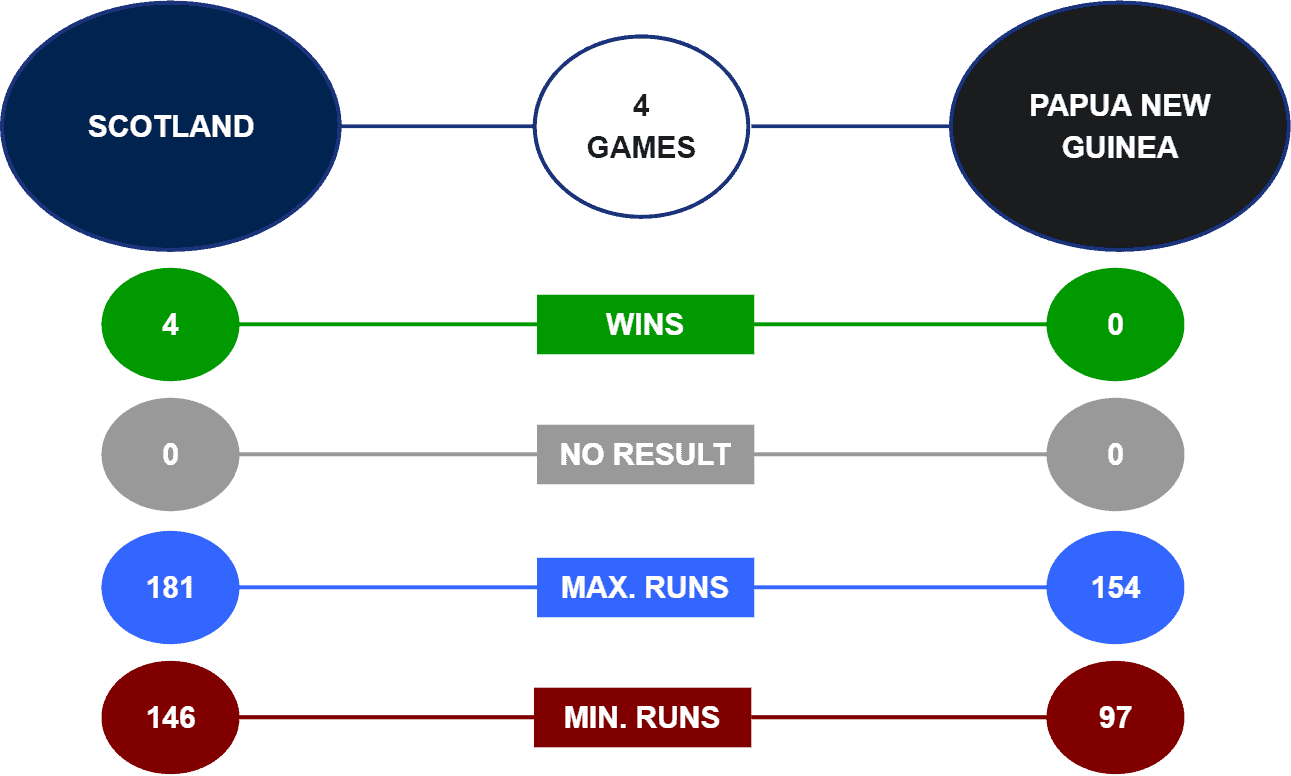 Shall we look at some Scotland v Papua New Guinea toss winner stats? Let’s do it. They’ve played each other four times in T20Is and PNG have had the better of the toss.

They’ve won three out of four so we’ll bet they’ll carry on with their good run on the toss, at least.

Recommended Bet: Back Scotland to win @ 1.15 with Betway

You can always argue that a side as big in the betting as 5.0 deserves to carry your money in a T20 game. After all, as we said about Greaves, it only takes one big performance from one player to change a match.

Having said that, even if PNG bat quite well, they showed their bowling really is weak. Scotland did both disciplines well against Bangladesh, showed maturity in both innings and will be high on confidence after a major upset.

There’s something else. Scotland have played this lot four times and beat them four times. A couple of those were pretty close but it was the Scots winning every time.

They should do so again here.

Make sure to check out our Betway India review for more on this top betting site.