There were few, if any, scary moments for Team India in their demolition of Sri Lanka – the highlight of which was a scintillating knock from Ravi Jadeja (175*).

Confidence will be soaring in the camp, and most Indian betting sites are earmarking the hosts as comprehensive favourites to seal the series with a win in this day/night clash.

After looking at the online cricket satar bazar and analysing the form players, latest stats, and injury news – I’m predicting another comfortable home win as part of my India vs Sri Lanka Betting Tips.

The game gets underway at 2.00m pm (IST) at the M.Chinnaswamy Stadium, Bangalore.

The odds of a win for India are even shorter than the previous match – and with good reason. India is the obvious bet if you want to bet large amounts for a skinny return at the price.

However, I can see more value elsewhere in the game. Check out my free cricket betting tips below to see what I mean.

The good results keep rolling in for Rohit Sharma! His start to life as Indian skipper could not be going better – a win in his first Test match as skipper means he is yet to lose since he was announced as skipper across all three formats.

India were imperious across all aspects of their game in their thumping of Sri Lanka – it was a clinic in what top-class teams do to those not operating at the same level.

Ravi Ashwin, who claimed six wickets in the match and hit an exhilarating 61 runs from 82 balls, is impressed with the impact his new skipper is having.

Speaking after the game, he said: “Rohit, we all know how tactically strong he is and how good he is. But I saw a lot of human elements in the way he led the side. He was looking out for anyone in the team, how everyone would feel, how everyone’s confidence is important for the engine room to function.”

Bad news for left-arm spinner Kuldeep Yadav – he has been released from the squad to make room for Axel Patel, who is back from a shin injury that meant he missed the tour of South Africa and the West Indies.

It’s not clear if Patel will start the second match, though. There are no further injury doubts to worry Indian selectors.

I sound like Captain Hindsight here, but I’m picking Ravi Jadeja as the Indian player to watch purely because he was so pleasing on the eye against the Lions in the first test.

Nine wickets supplemented a majestic unbeaten 175 in the match – it wasn’t even close for officials deciding on the Man of the Match.

He ranks as one of the best all-rounders in world cricket, and it’s that holistic cricketing ability that gives him a better chance than others at landing Player of the Match gongs. That’s why I will be backing him to be Man of the Match at 6.0 with 10CRIC.

Despite their injury crisis, there was a feeling a young Sri Lankan team may cause a few surprises against India with an exciting batting line-up and the wily accuracy of their spinner Lasith Embuldeniya.

However, it feels as though all expectation surrounding this side has been squeezed dry after what was nothing less than a mauling at the hands of India in less than three days.

On the evidence of last week, the Lions have a long way to go before India can even consider them a threat. The win probability for India vs Sri Lanka stacks against them with good reason.

There is a long list of issues with Sri Lankan fitness at the time of writing.

There are no further injury updates, though Nottinghamshire assistant Anton Roux is heading to Sri Lanka after being appointed their fielding coach. It is unlikely he will join the squad with social distancing requirements in force.

He was my player to watch last week, and I’m sticking with him once again after he claimed two key wickets of Mayank Agarwal and Virat Kohli.

He bowled 46 overs in a brutal spell in the field, going at 4.09 runs an over, which was only behind Suranga Lakmal in terms of economy. He bowled more than twice as many overs as Sri Lanka’s other spinners, so it will be interesting to see if fatigue plays a part in his performance.

I am backing Embuldeniya to be the top wicket-taker for Sri Lanka in the first innings – you can back him at 3.20 with Betway.

The picturesque M.Chinnaswamy Stadium in Bangalore hosts this weekend’s test match – its first since 2018.

India’s head-to-head record over Sri Lanka increased to 21-7 with their win last weekend, while there have been 17 draws.

I cannot see Sri Lanka closing the gap here – a draw will be their best hope of getting something from this encounter.

Read below for the full India vs Sri Lanka stats: 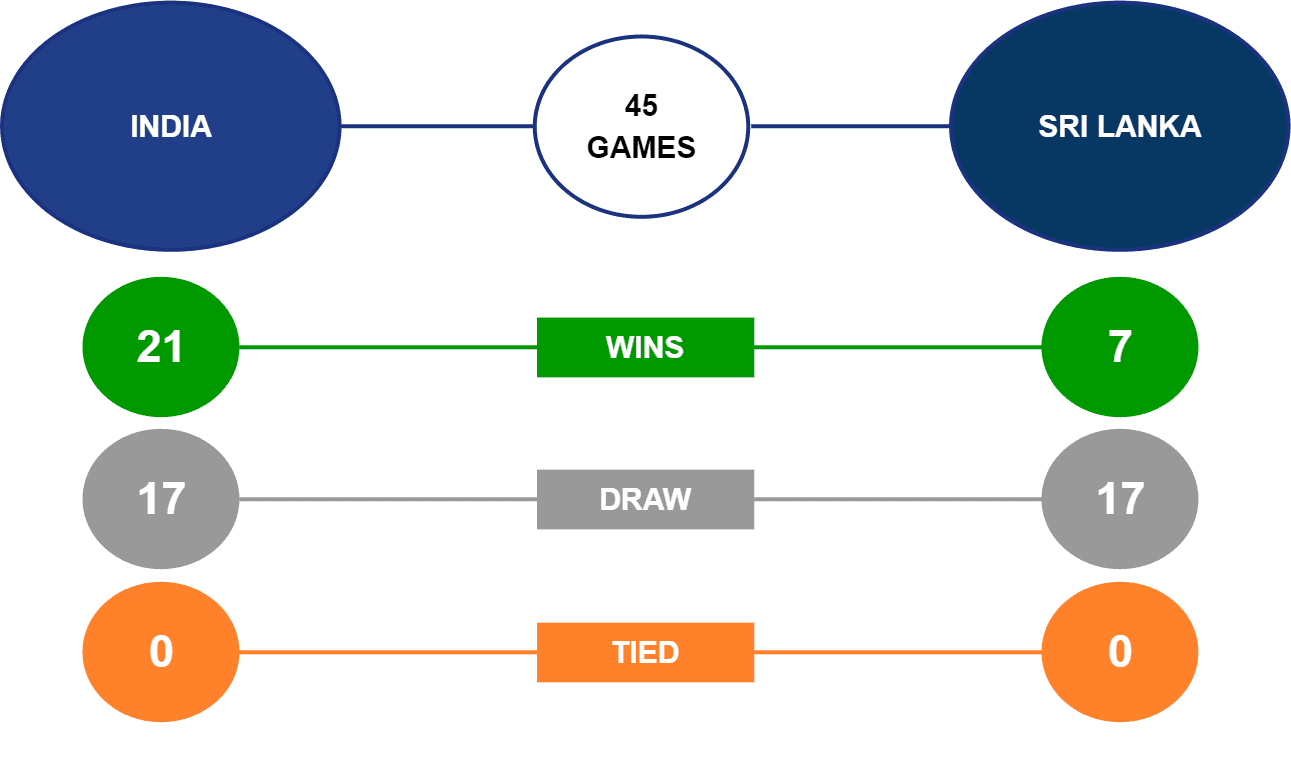 India winning the toss was a decisive factor in the first match. Rohit Sharma’s first call as a skipper was an unqualified success – opting to bat first and set a mammoth 574-8.

I am predicting Sharma to get it right once again.

Recommended Bet: Back India to win @ 1.09 with Pure Win

I cannot recommend making any meaningful bet on India to win – they’re overwhelming favourites (for good reason), but the price is too short for how poor the record is at the M.Chinnaswamy Stadium.

However, if you want to get involved in the India vs Sri Lanka match winner market, then there is no other bet than an Indian win. Bet with Pure Win to get the best odds in the industry – they are a leading online Indian betting site with thousands of pre-match and in-play betting opportunities.

Find out more about Pure Win by checking out our review here.

Recommended Bet: Back Rishabh Pant to hit two sixes in the first innings at 3.75 with Betway

In the first test, the irrepressible Rishabh Pant was in excellent form, smashing 96 runs from 97 balls to fall just short of a fifth test century.

He hit four sixes in that knock, and I think 3.75 is a great price for him to hit half that amount in his next innings.

I will be placing my wager with Betway – they have a fantastic selection of unique pre-built bets at exciting prices. Read more about them in our complete site review here.