The Adelaide Strikers face the Sydney Sixers in the Challenger for the right to face Perth Scorchers in the BBL 11 final – and we have been looking at the online cricket satar bazar, facts, and figures before all the action gets underway.

Find out who I believe will win, and other Sydney Sixers vs Adelaide Strikers BBL Betting Tips in my full preview below before play starts at 1.55 pm IST on Wednesday 26th January at the Sydney Cricket Ground, in Sydney.

The Sydney Sixers are marginal favourites for the tie – home advantage could swing the win probability for Sixers vs Strikers in their favour.

I think 1.88 is a very good price to back the defending champions, which is why the Sixers to win is today’s cricket prediction.

The Sixers are going for their second attempt at landing a spot in the BBL 11 final after being thrashed in the Play-Off by the Scorchers.

The usually-reliable bowling attack were maimed and tamed by Josh Inglis and Kurtis Patterson and conceded 189 runs, which their lighter batting unit could not chase down.

Before that defeat, the Sixers can point to a largely successful season – winning nine of their 13 games to finish second in the standings. Josh Phillipe has been their most prolific batter – at the time of writing, he has 429 runs in this tournament and lies seventh in the top run-makers of this year’s campaign.

It’s in the wicket-taking column where the Sixers have been most impressive – in particular Hayden Kerr. The New South Wales star has bagged 24 wickets in this competition – only Peter Siddle has more with 29.

The Sixers were dealt a hefty blow in the run-up to this tie – star wicket-keeper and leading run scorer Phillipe is likely to enter health and safety protocols and looks set to miss out.

St Kilda keeper Paddy Rowe – who played for the Stars in the Melbourne derby at the start of the year – will fill in as a back-up.

Mickey Edwards and Jack Edwards are already out with ailments, while explosive batter Daniel Hughes is also a major doubt after suffering an ankle ligament injury in the warm-up against the Scorchers.

Nathan Lyon received a bit of tap against the Scorchers – but in hindsight, skipper Moises Henriques wouldn’t have been opening the bowling with the spinner on what proved a flat deck.

He comes into this game flying after a successful Ashes series and it would be foolish for the Strikers to underestimate his ability to tie down players and suffocate his way to wickets.

Somebody lit a fire underneath Peter Siddle – the experienced Aussie pacer has been the main reason for his side’s total reversal of fortunes.

He has taken 29 wickets so far in the BBL – five more than his nearest competitor. His phenomenal form reflects the progress the Strikers have been making in recent weeks.

The Strikers have won seven of their last eight contests and look to be hitting the sweet spot at just the right time. The Jason Gillespie-coached side are looking for only their second-ever Big Bash League win – and you would not put it past them to get over the line in their current form.

Despite the roll they find themselves on, I cannot see them overturning my Sixers vs Strikers predictions.

Whereas it’s all bad news for the Sydney Sixers, the Strikers got a huge boost surrounding the fitness of star bowler Siddle.

The skipper pulled up with what looked like a sore back against the Sydney Thunder on Sunday night, but has confirmed it was only a minor niggle and he is primed for one of the biggest matches in his domestic career.

It hasn’t taken long for Alex Carey to get back into the full swing of things after returning from the Ashes tour. The wicket-keeper batsman has hit scores of 67 and 23 in the two innings since his return, and looks in fantastic touch.

I have been checking out some of the Betway specials and can find a pre-built bet of Alex Carey to score 50+ runs and Hayden Kerr to take 2+ wickets at odds of 8.0. I will have a little nibble at that price given the form of both players.

The Sydney Cricket Ground (SCG) is a particular favourite of our One To Watch for the Strikers – Alex Carey. He averages 57 from four innings there – including a high score of 83 not out, which he bagged against the Sixers back in 2017.

The weather should remain largely dry for the match, although there are some overcast conditions knocking about.

The Sixers have a commanding lead when it comes to the Sixers vs Strikers head-to-head record – winning ten of the 16 games these two have battled out.

Of those ten wins, seven were achieved when targeting totals. I can see skipper Henriques opting to chase again if he wins the bat flip to make the most of his stronger bowling unit.

Find the full match history of these two below: 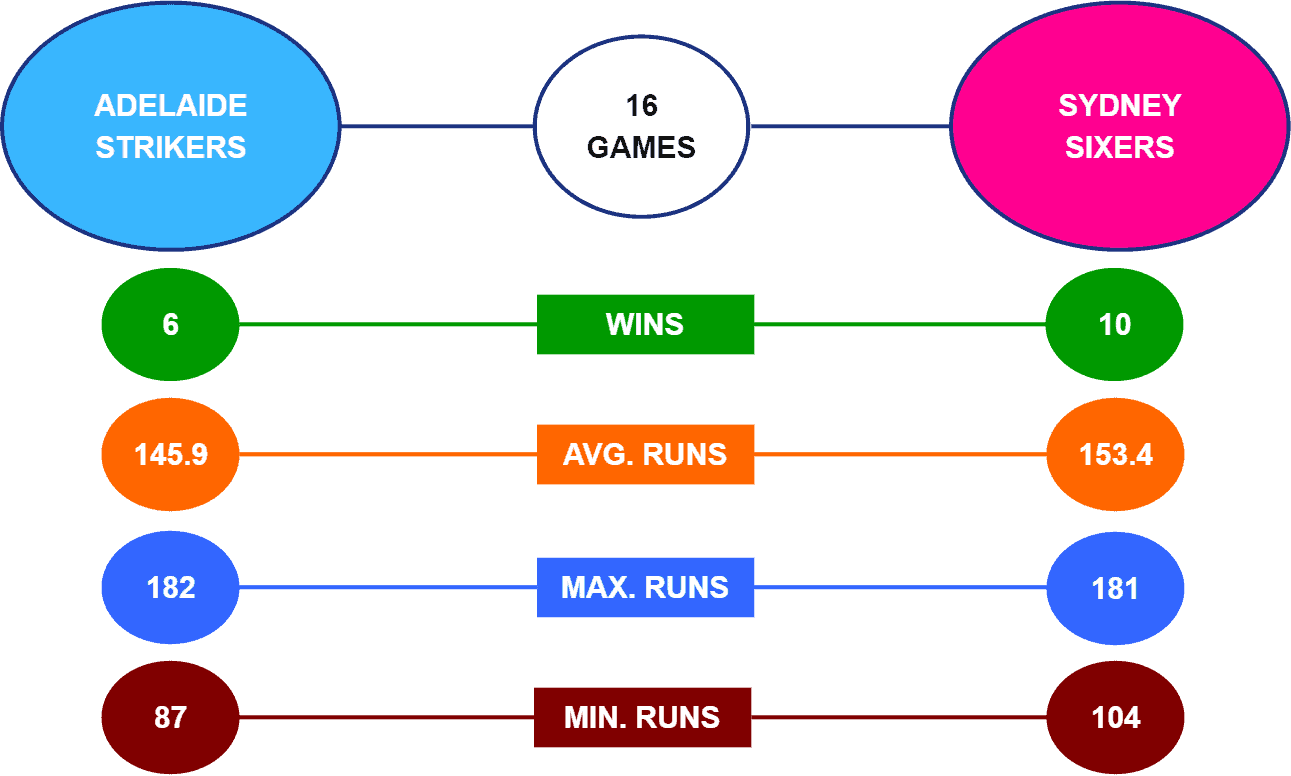 The Sixers also lead the toss stats – though the margin is much closer. They have won nine of the 16 calls – but few would have had more significance than this one will!

The Sixers won the toss the last time they faced the Strikers and elected to bat – they went on to lose. I’m backing them to call correctly and opt to field first this time – and I think they will go on to win if they do.

You can find the Sixers vs Strikers toss winner statistics below:

Recommended Bet: Back the Sixers to win @ 1.88 with Pure Win

This was a close call to make! I think this Strikers team – one burgeoned with returning stars and sky-high confidence – poses the biggest challenge the Sixers have had to face this season.

I just think the match-up between bat and ball favours the Sixers. Their bowling unit has more strings to their bow and there is greater depth to their batting roster. You only need look at Abbott’s and Dwarshuis’ miracle run-chase against the Heat back on December 29th to see how far down they bat.

I am backing the Sixers to win with Pure Win – they always offer the best pre-match winner odds on all the biggest cricket events. You can see what we mean by checking out our Pure Win review!

The leading wicket-taker in BBL history lives for these types of games. He bagged two wickets in the BBL 10 final last year – and I can see him using his nous to top the wicket-taking column here too.

He can be expensive – but what he leaks in runs, he makes up for in crucial and unplayable deliveries.

I am placing my bet with 10CRIC – they offer a healthy range of online cricket betting opportunities, both pre-match and in-play – read our review of 10CRIC here.