The game will be played at the Tottenham Hotspur Stadium and will start at 4:30 pm local time (9:00 pm IST) on Sunday, August 15.

This is going to be an absolute thriller of a match featuring football betting opportunities.

City will start as the favourites on paper following their terrific run last season that saw them lift the Premier League trophy. Spurs, meanwhile, are under the new management of Nuno Espirito Santo and expectations will be high from him to deliver the wins.

All in all, this is a mouth-watering affair and just to keep things interesting, I’m going to back a win for the Spurs here. Let’s find out why.

Tottenham Hotspur have done well in their pre-season friendlies, going unbeaten in the five games played. More importantly, Santo has had some time to sculpt the team in his image and by the looks of it, it is coming together.

The Lilywhites capped their EPL preparation with a 1-0 win over Arsenal last weekend with Son Heung-Min scoring the sole winner. In the game before, they fought Chelsea to a well-deserved 2-2 draw – Lucas Moura and Steven Bergwijn scored the goals to stage the comeback and keep the momentum.

Last term, Spurs finished seventh although, they missed out on the Champions League spot by five points. They do, however, have got a chance to make it to the Europa League main draw if they successfully navigate the play-offs this month.

But the bigger talk here is the potential transfer of Harry Kane to City – which also means that the English striker may not be showcased on Sunday against the side that is desperate to sign him in the current market. That said, he did train with the team on Friday.

The new signings of Bryan Gil and Christian Romero will not be available either. However, there is sufficient talent on the Spurs’ side to give Manchester City a solid run for their money.

That close defeat does not do justice to their terrific run in the pre-season friendlies. Manchester City were fairly impressive in those games, beating sides like Barnsley and Blackpool by 4-0 and 4-1 respectively.

The Citizens won the 2020-21 season with 86 points from 27 wins and just five draws – a good 12 points ahead of the second-placed Manchester United. Now with the addition of the mega-signing Jack Grealish, the team is all the more reinforced to keep up the same performance and possibly, win the treble too.

For this game, City will have to make do with the services of Kevin de Bruyne and Phil Foden due to injury. Meanwhile, Gabriel Jesus, Ederson, John Stones, Kyle Walker, and Raheem Sterling also remain unavailable – Brazil and England both had final appearances in Copa America and the Euros 2020.

This slightly weakened Manchester City squad may just cost them the game, especially seeing that they are playing away from home.

Spurs and City have met each other a total of 164 times since 1909 in Premier League, League One, and other competitions.

Last season, Tottenham won the home leg 2-0 and lost the away fixture at the Etihad Stadium by 3-0. The two sides also met in the Carabao Cup where Guardiola’s side won 1-0. 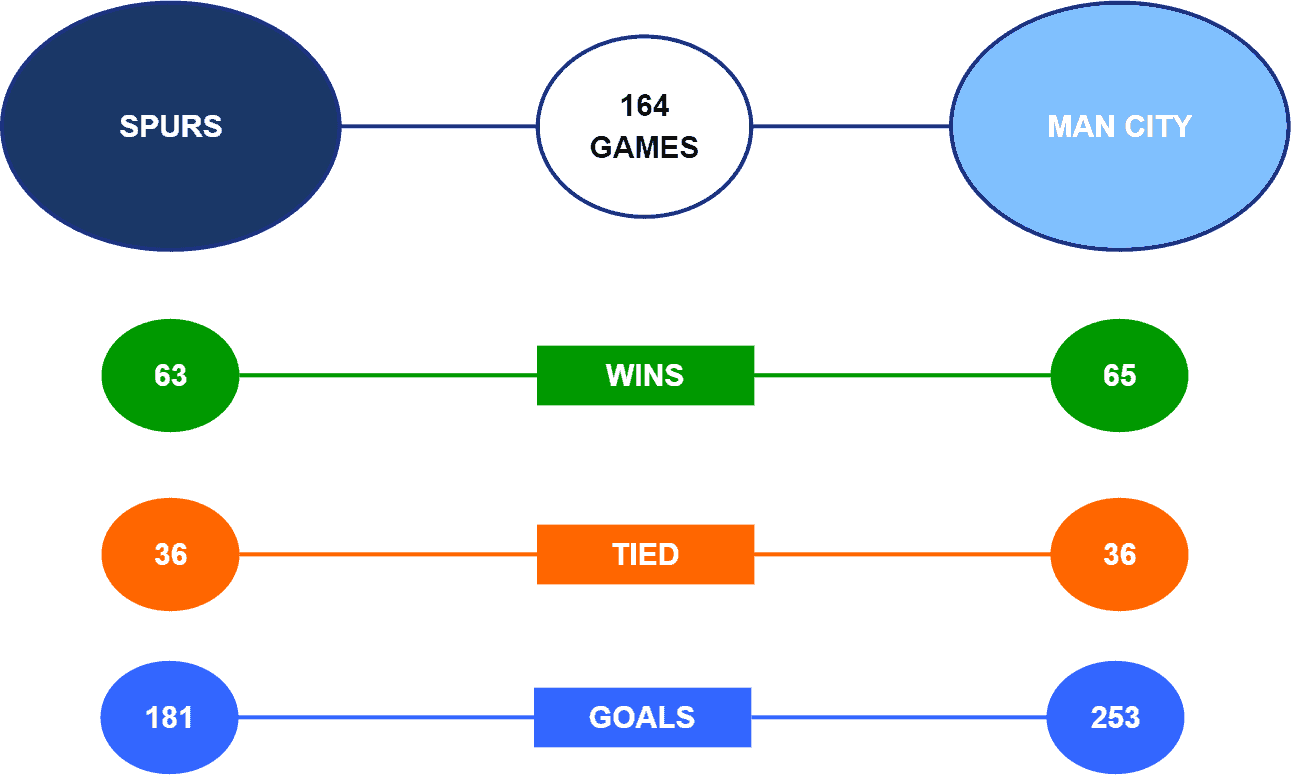 Recommended Bet: Back Manchester City to win @ 1.56 with 10CRIC

This is going to be a close game that can just as likely end in a draw or a win for Manchester City.

But Spurs have made a good case as to why they may just beat City here. Not only are they in a good run, but history and stats are also on their side. And then there is also the matter of having a significant home advantage where they haven’t succumbed to Guardiola’s side in quite some time.

Of course, this also depends on whether Kane starts on Sunday or not but even without him, the hosts should do well to pull a win here.

Son Heung-Min to be Anytime Goalscorer

Recommended Bet: Heung-Min to be anytime goalscorer @ 2.10 with Betway

Son scored against Arsenal last weekend and certainly looks primed to keep up the tempo.

Additionally, he has scored against City in the Spurs’ last two wins at home. The stars are aligned and the conditions are set for him to score once again.

Given the player quality and just the fact that this is a high-octane fixture between the two Premier League giants, it is reasonable to expect a few goals in this match. All in all, we can see goals from both the teams with the total count likely to exceed 2.5.