In what is set to be a mouth-watering clash in the T20 World Cup Group 1, Australia and West Indies will go head to head. The match will take place at the Sheikh Zayed Cricket Stadium, Abu Dhabi on Saturday, November 6, at 3:30 pm IST (2:00 pm local time).

Get the best rates from the online cricket satta bazar as well as the best Australia vs West Indies betting tips and predictions below.

Australia are heading into this match after hammering Bangladesh in a largely one-sided affair. They have the wind in their sails and will look to seal the Super 12 with a win.

West Indies, on the other hand, are already out of the competition and will look to make things precarious for the Aussies on the way out.

Between the two, the Baggy Greens are the obvious favourites. They are confident, in form, and are looking more as a unit than they did a few months back. Let’s back them in our Australia vs West Indies betting tips & predictions.

Australia have lost just one of their four Super 12 matches – an eight-wicket defeat that came against the current tournament-favourites England. But apart from that, they have outdone their opponents – a list that entails South Africa, Sri Lanka, and most recently, Bangladesh.

The Aussies did all they could against the Tigers, bowling them all out for just 73 runs and responding to the chase with 78-2. Adam Zampa took five wickets with Mitchell Starc and Josh Hazlewood getting a couple in the process. With the bat, Aaron Finch and David Warner guided the team to a comfortable chase.

Despite these impressive results, there is a very real possibility that Australia may not reach the semifinal, even if they beat West Indies on Saturday.

At the moment, the Invincibles are sitting second in the table with six points – tied with South Africa for the same but they lead by the virtue of a higher net run rate. If Australia and the Proteas both win their matches, then they will be tied at eight points with table toppers England. Then the equation comes down to the net run rate once again.

If South Africa lose and Australia win (or vice-versa), it is a much clearer picture. In terms of player availability, there are no major concerns for the Aussies.

West Indies started the competition as defending champions but by the looks of the cricket they have played, nothing could be further from it.

They have lost three of their four matches in the Super 12 to the likes of England, South Africa, and most recently, Sri Lanka. Against the Lankans, the Caribbeans suffered heavily in terms of bowling and batting.

With the ball, West Indies couldn’t do much as Sri Lanka managed to reach 189-3 in 20 overs with Andre Russell picking two of the three wickets. In the second inning, the side reached 169-8, thanks to the heroics of Nicholas Pooran (46 off 34) and Shimron Hetmyer (81 off 54).

The rest of the players went in single digits, which goes on to say had it not been for Pooran and Hetmyer, the defeat could have been worse.

There are problems for West Indies all around here – be it the ageing squad, misfiring in the batting line-up, or a lack of finesse in bowling. Chris Gayle hasn’t clicked that well while Dwayne Bravo has already declared that he would be retiring after the T20 World Cup. All that is left for them is to play for pride.

We are in Abu Dhabi for this one where the conditions seem to be better primed for bowling. Seamers can benefit from the swing and batters will need to be careful in defending their wickets.

Being a day match, dew will have little role to play. And looking at how the games have gone here so far in Super 12, batting second seems to be the norm. However, if the first-inning score is upwards of 160 runs, then it is possible to defend the target.

Australia on this turf against South African in their first Super 12 match while West Indies were beaten by Sri Lanka on Thursday.

Check out our Sheikh Zayed Stadium betting guide for more on this venue!

In the head to head tally between Australia and West Indies, it is advantage to the Caribbean side. They lead the Aussies 10-6, with five of those wins coming in their last six encounters.

West Indies also won the home series against them this year in July by 4-1. 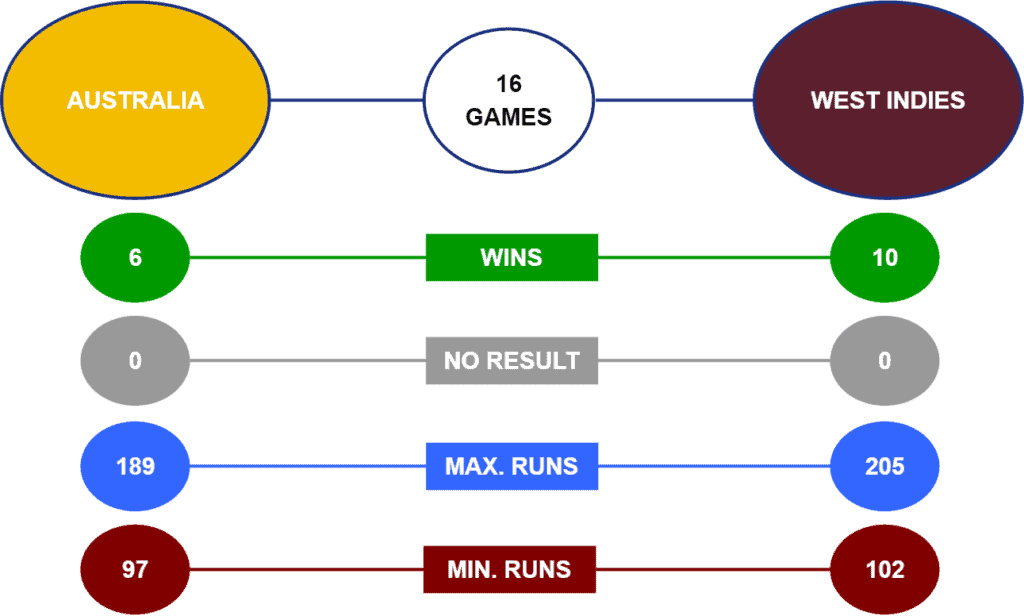 West Indies also have the edge in the coin toss department as they lead 9-7.

In the 2021 T20I series, however, the Aussies won the toss four times out of the five. Let’s back them to continue the same trend.

Australia have everything going on for them and a slip up here may potentially cost them the semifinal berth.

They have a wonderful opportunity here to avenge their series loss in the Caribbeans and deal some serious damage to the morale of the already-eliminated West Indies. Their bowlers are in excellent form and while the likes of Finch, David Warner, Mitchell Marsh, and others are also doing their part in the competition.

As for West Indies, things just haven’t gone right for them at all this World Cup. They are all over the place and have had to rely on a few individual players to bring in the runs and wickets. An Australian win is the most probable outcome here.

David Warner may not be at his clinical best yet, but it seems to be a matter of time before he starts firing again. He has been working hard to find his rhythm and the match against the West Indies may just show us that.

He is, after all, the leading Australian run-getter in this T20 fixture with 311 runs – let’s back him to enhance that tally further.

Let’s round things off with some quick stats ahead of the Australia-West Indies game.