More BBL betting to look forward to between two of the league’s big strugglers, who have a good opportunity to add to the opposition’s misery. A defeat here and the Strikers really can forget about the Playoffs for good.

Both are desperate for points and this should make for a good contest in Brisbane. In addition to the team news, head-to-head record, pitch report and important stats, we also have the top Heat v Strikers betting tips coming up next.

The best cricket betting tips are up next ahead of this BBL clash between the Heat and the Strikers. We’re at the GABBA for this one and it could well be a high-scoring match.

That should play into the hands of the Heat, who have batsmen who can score more boundaries and boast higher strike rates. Just one of several reasons why the Heat are my pick here.

I also have the usual toss winner prediction and a tip at big odds for the Strikers’ top bowler.

The Heat have now lost their last two and are going nowhere fast.

It’s quickly getting to the stage where the best they can hope for is to finish fifth, sneak into the Playoffs and find some serious form at that stage.

But not only are they far from guaranteed a Playoff place at all but to win four in a row to win the title seems virtually impossible considering you’re going to have to play the best teams in the Playoffs.

Still, they came close to doing that exactly that last year, almost making the final.

In truth, losing the last two games really wasn’t their fault. They came up against teams who were missing far less players through Covid than their opponents.

But they really are drinking in last-chance saloon and losing here would open the door to plenty of other teams in terms of securing that fifth-placed spot.

That all of those nine players were out for the past two games tells you everything you need to know about how many important players they were missing.

There’s no Fakar Zaman because he’s not allowed to enter Queensland due to Covid restrictions; he’ll be back to play the Stars on Sunday.

Sadly it means the end of the road for grade players brought in to play for the Heat at such short notice  who had their moment in the sun.

Then again, all those guys were pretty lucky to have played in the Big Bash at all.

Duckett’s career for England is probably over with concerns about his discipline, attitude and fitness. It’s hard enough to get into England’s white-ball teams as it is, never mind if there are question marks about the three things just mentioned.

So the best he can hope for is to have a decent career as a T20 globetrotter.

And he’s done well at the Heat this season and his 218 runs are less than only Sam Heazlett among the Heat’s players; in the process he’s outscored the great Chris Lynn from the same number of matches.

He’s scored two fifties and his strike rate of 138 is excellent. More runs in his final few games could well see him return next year.

Hard to say anything new about this lot. Last time out the Strikers came pretty close to beating the Stars despite posting a very modest total first up.

Had the Stars’ Joe Clarke not been dropped when he was (on 40-odd) and they probably would have won the game.

But then again, posting below par scores and then coming close to defending them is nothing new to this bunch. As ever, their bowling was very competitive but their batting lacks power, imagination and quite frankly, quality.

At this stage not finishing bottom may even be seen as a decent result for the season and there’s plenty of work to do ahead of next year’s campaign.

Ryan Gibson returns after picking up an injury early on in the season and will slot into the middle order at the expense of Matt Renshaw, who, you guessed it…has got Covid.

Other than that, it should be the same side who lost narrowly to the Stars the other day.

Wells has been their best batsmen this season.  Not just because he’s their top run scorer with an excellent 280 runs from 10 games but also because he’s been pretty consistent. Unlike some other players who can sometimes be a case of feast or famine.

They might think of playing him at three instead of four, and play the anchor role.

A bit like Kane Williamson for New Zealand or Virat Kohli for India. If he’s in the best form of anyone on the side, you might as well have him facing as many balls as possible.

But that will only work if other players take risks around him. And right now, no-one seems capable of doing that.

Brisbane, as we know, can be an excellent wicket. Fast, true, with even bounce and one where you get real value for your shots. Teams normally try to target 175-180 batting first here.

But good quality fast bowling can be rewarded there so the likes of Peter Siddle and Wes Agar (even more reason for him to play) could be dangerous there.

But if it’s a high-scoring contest, it could play into the hands of the Heat who have more batting power so all in all, this could be quite an even contest.

Let’s look at the Heat v Strikers head-to-head. One of the tigheter head to head records sees the Strikers 8-7 up over the years. Earlier this season the Heat posted a big 208 runs batting first, which the Strikers came nowhere near chasing. 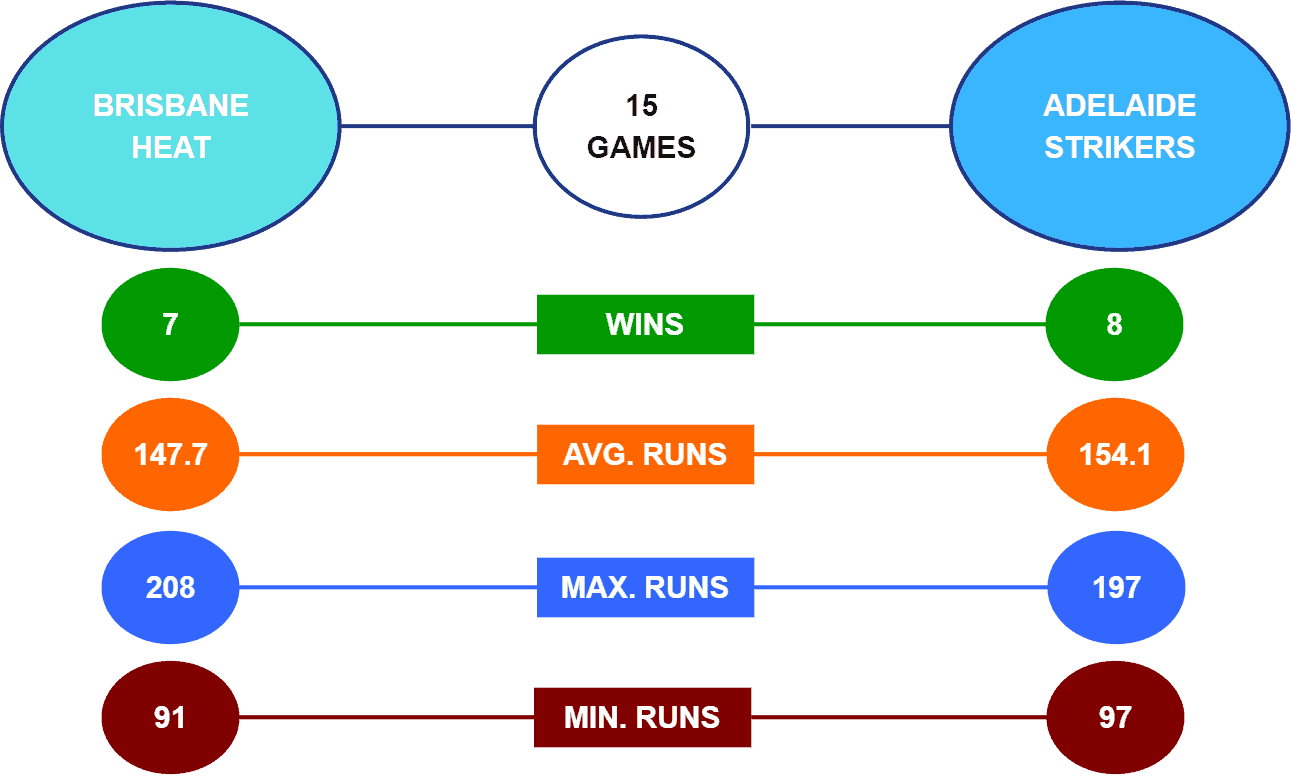 Time to look at the Heat v Strikers toss winner statistics. The Strikers have also had the better of the toss, not just the head-to-head.  Let’s go Adelaide Strikers to extend their lead.

Recommended Bet: Back the Heat to win @ 2.1 with Betway

This could be one of the stand-out prices of the season. The Strikers have only managed to pass 150 in one of their last four matches and that’s certainly not going to be enough here on this wicket.

As we’ve said already, this could be a high-scoring match and the Adelaide side really do lack power with the bat.

They’ve also only managed to win one match out of their last eight so their form is truly dreadful.

With all those Heat players back and raring to go, the Strikers are very much there for the taking and unless the likes of Siddle and Rashid Khan bowl out of their skins, it’s the Heat (at home, no less)  who have all the trump cards.

Here’s our Betway review by the way, where you can see why they’re one of our recommended sites.

Hot Bet: Back Peter Siddle to be Strikers @ 3.25 with Betway

Are we going to go to the well again with (Jonno) Wells? Not quite. Wels has provided us with a couple of winners for Strikers’ top bat at good odds but he’s not the one we’re siding with again on this occasion.

Rather, we prefer veteran Peter Siddle for Strikers’ top bowler. He’s on 18 wickets, which is four more than Rashid Khan,and a load more than anyone else in the side.

I had him as Strikers’ top bowler at odds of 7.05 last time out and his two wickets were enough for him to win the betting heat.

He’s not quite the same odds this time round but he’s still the most likely winner in my book and  should be favourite, ahead of Khan. So Siddle it is.