Another BBL match to look forward to but sadly, another one where Covid will play a big part when the Brisbane Heat play the Hobart Hurricanes at Brisbane on Saturday January 8.

In addition to the team news, head-to-head record, pitch report and important stats, we also have the top Heat v Hurricanes betting tips coming up next.

All in all, you’ll have everything you need to know before it gets underway.

The best cricket betting tips are up next ahead of this BBL clash between Heat and Hurricanes.

We’re at Brisbane for this one but the venue or head to heads aren’t nearly as important as the team news.

But I’m going to take a real gamble here and go with the Heat, despite the fact they’re missing plenty of important players.

The odds are too big to resist and the Hurricanes have a few absences of their own that could affect them.

I’ll also give you my prediction on the toss market and who can be the Heat’s top batsman on the night.

The Heat were going pretty well until they suffered the same fate as plenty of other BBL sides over the past couple of weeks: an outbreak of Covid denied them use of most of their players against the Renegades.

Having posted just 129/6, they managed to dismiss opener Sam Harper for a duck but that’s as good as it got.

Veterans Aaron Finch and Shaun Marsh made light work of the total and they chased it with five overs to spare.

So they’re now down to sixth and this becomes a big match for them. Lose it and they risk not making the Playoffs at all.

Win it and they’re very much in business but there are plenty of absences to speak of, so it won’t be easy.

No Lynn, Duckett, Steketee, Blazey, Bartlett, to name but a few.

All of them tested positive for Covid so missed out the other day and  they’ll all miss out again here.

That means the evergreen Tom Cooper takes over as skipper again.

Much will depend on their senior overseas players with bat and ball.

Fakhar Zaman managed just three on his Big Bash debut but he’s too good a player not to make an impact sooner or later.

Afghan spinner Mujeeb was excellent last time out with 1-16 and with a bigger score on the board, it was the sort of spell that on another day could have won them the match.

The Heat fielded eight debutants the other day and those eight may well play again here.

At 35, Tom Cooper is one of those players who’s seen it all before.

He played international cricket for the Netherlands for years, was at the Renegades for a long time and has also played in the CPL and in county cricket.

He’s a steady middle-order batsman who also bowls some occasional off-spin and as the senior player from among those available, was asked to lead the side in the absence of Jimmy Peirson, with former skipper Chris Lynn also out.

So he’ll have plenty to do here.

After a good run that was mostly due to the remarkable form of Ben McDermott with the bat,  they’ve now lost their last two and slipped down to fourth, though a Playoff place is still very do-able.

There were few excuses for posting just 126 against the Strikers the other day.

D’Arcy Short and Tim David made decent contributions but the rest didn’t. There’s a danger that they became a little too reliant on the runs of McDermott and might struggle if he gets out early.

Mathew Wade by his high standards, is badly out of form. The hero of that World Cup semi-final against Pakistan scored just eight runs across his last four games, which is really poor. He needs to step up.

Wade is actually absent for this game for ‘personal reasons’, while English duo Harry Brook and Jordan Thompson won’t play either after being in contact with someone who had Covid, though both have returned negative tests themselves.

Scott Boland is on Ashes duty and both Nathan Eliis and Joel Paris are injured, so they’re going to have to make do with quite a few absentees.

D’Arcy Short will probably move up to the opener’s spot again (in the absence of Wade) after being shifted to number three to accommodate McDermott at the top of the order.

It’s been something of an inconsistent season for Short that include dropping own to three to accommodate the in-form McDermott.

Some may argue that there’s little difference batting at three or opening but the result is it’s taken Short out of his comfort zone and he hasn’t been so good the past few games.

But he’s kept on scoring ‘some’ runs rather than big runs with plenty of totals in the 20s and 30s.

If he can start to convert those into fifties, then life will look a lot rosier for both him and his side.

He’ll open in his match and 10 CRIC make it 4.67 that he top scores from his favourite batting position.

Big Bash fans will know that Brisbane has traditionally been one of the highest-scoring grounds in the competition. After all, it’s where the Big Bash’s top scorer- Chris Lynn- has scored most of his runs.

Proof of how good the wicket has been at the GABBA is that the Thunder scored 196 there and the Stars got 207 this season; both against the Heat.

So, not good memories so far for the Heat at their home ground. It’s also not ideal that so many of their players who know the ground so well, are missing.

Hobart are 11-8 up over the years but it was the Heat who won this match the last time out, successfully defending just 150. 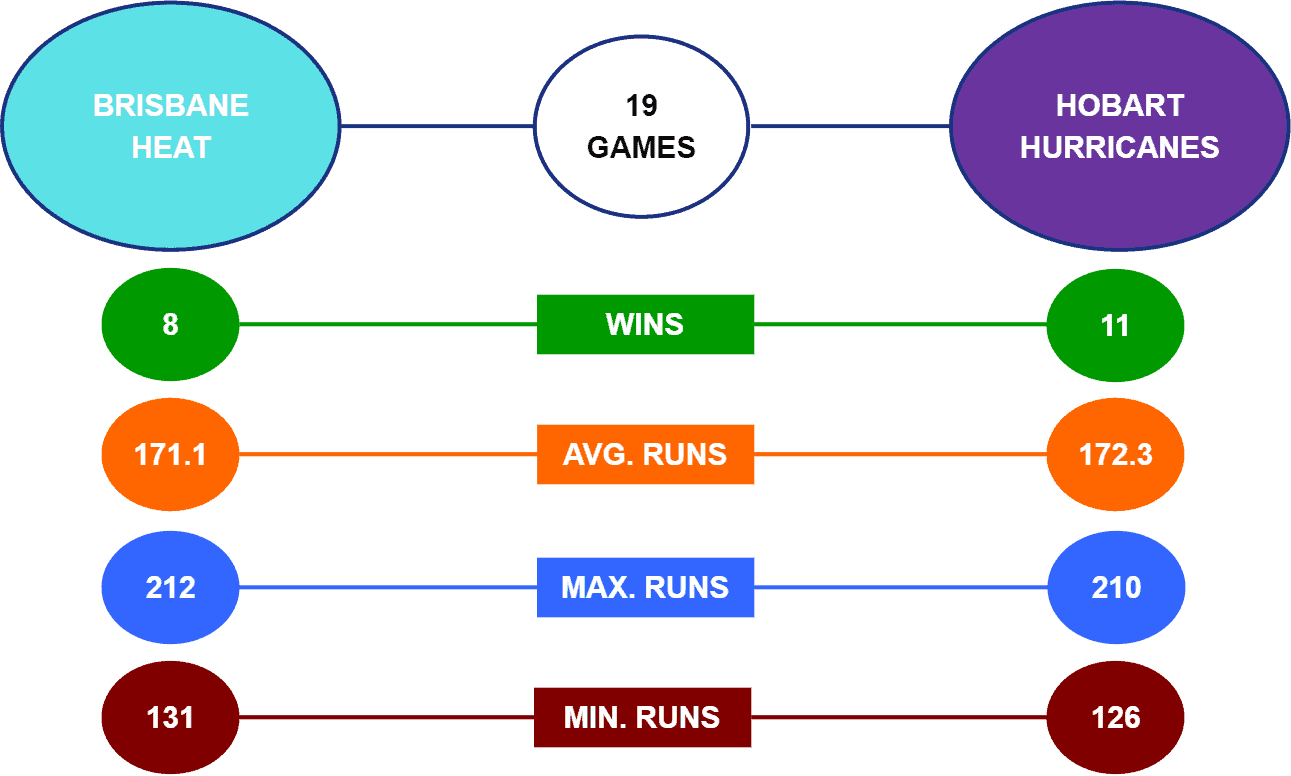 Time to look at the Heat v Hurricanes toss winner statistics. Curiously, the head to head on the toss is exactly the same as the head-to-head on the coin toss.

Which means the Hurricanes have had the better of the toss over the years so let’s go with them to win it again.

Recommended Bet: Back the Heat to win @ 4.2 with Pure Win.

It’s very rare that you get a team at 4.2 to win a game in a competition like the IPL, the CPL or the Big Bash.

After all, in franchise cricket you don’t really expect to see the gulf in quality you sometimes get in international cricket, if it’s say India v Ireland or England v Netherlands.

The reason here of course is that the Heat are missing so many players that their team is almost unrecognisable from the one they’d normally pick.

But the Hurricanes are missing a fair few important players of their own. That includes skipper Wade, the reliable Boland, the pacy Paris and two of their three overseas players.

As we often say here at Bet India, all you need is one or two players having a great game to really shift things.

If Zaman can hit a good 50 or 60 with the bat or if Mujeeb can take two or three wickets for 20-odd runs, that could make a huge difference.  Maybe enough to win them the game.

The Heat are outsiders for a reason, but it’s worth taking a gamble here.

Here’s our Pure Win review, by the way, where you can see why they’re one of our recommended sites.

Recommended Bet: Back Fakhar Zaman to top score for the Heat @ 6.32 with 10 CRIC.

I’ve mentioned Zaman plenty already so perhaps it’s no surprise that he’s my pick for the Hot Bet.

He didn’t have a great game on his Big Bash debut but this is a class act we’re talking about here, who has racked up well over 100 appearances for Pakistan across ODIs and T20Is.

He’s had a few days to adjust to Australia now, will bat at three which is a nice slot for him and may have little to beat with the likes of Lynn, Duckett and Peirson all unavailable.

Last time it was Jake Lehman who made an impact with 65 but this could be Zaman’s turn to shine at a big odds.