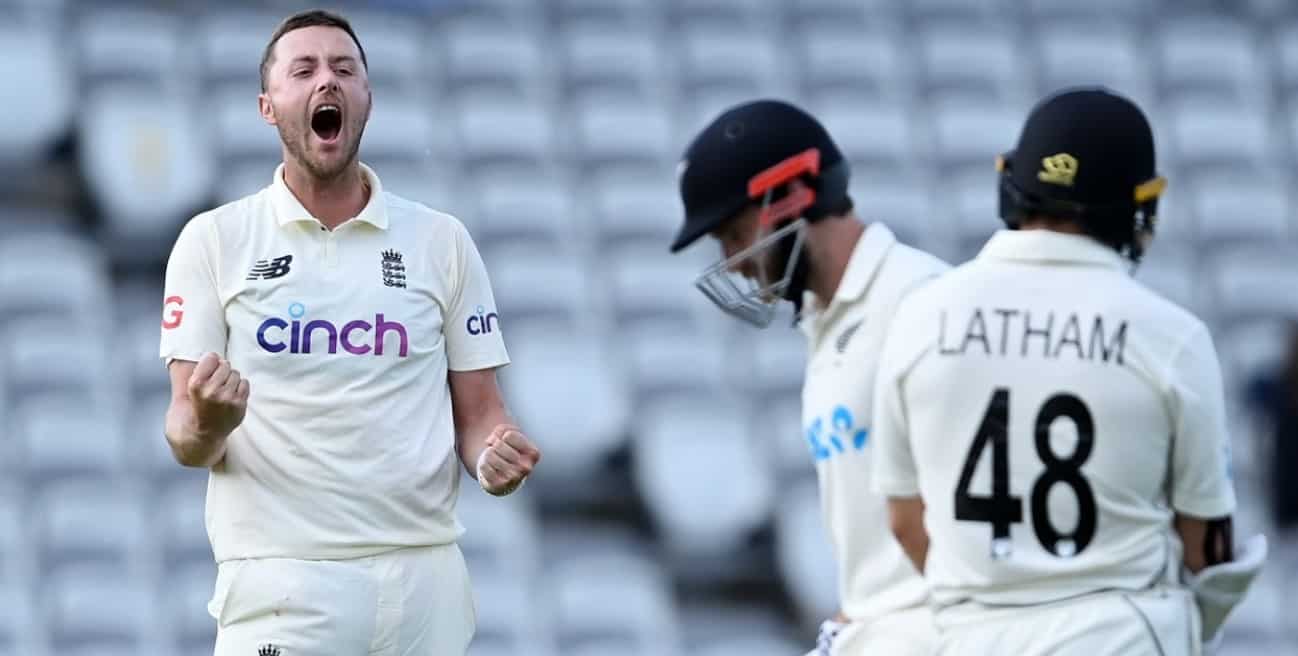 The first test match between England and New Zealand ended in a stalemate despite starting on a promising note. However, English batsmen put up a commendable performance to restrict the Black Caps from getting a crucial win in this two-match test series.

Conway Impresses with the Bat

Devon Conway, making his test debut for the visitors, had a memorable start to his international test career.

His double century inning was certainly a crucial one as New Zealand has lost the likes of Tom Latham, Kane Williamson, and Ross Taylor quite cheaply. By the time Taylor left, Williamson’s side were 114-3.

Henry Nicholls did a great job in assisting Conway (scoring 61 off 175 deliveries) and together, the duo stretched the first innings to the second day.

After they fell respectively to James Anderson and Mark Wood, the rest of their innings just collapsed on itself. Neil Wagner added 25 odd runs for the final wicket, taking New Zealand to 378-10.

Ad for England’s bowling, Ollie Robinson, making his debut, picked up 4 wickets while Wood and Anderson got 3 and 2 respectively.

In response, the hosts started just as well with Rory Burns guiding the home team to a strong start. Despite the very early departure of Dom Sibley and Zak Crawley – England’s opening order batsmen – Burns stayed on, later assisted by his captain Joe Root.

Had it not been for their superb innings – and later, Robinson’s, the match could have very well moved to a win for the Kiwis.

In all fairness, England were at 111-2 at the end of day two. But heavy rains on the third day of the test forced the abandonment of play for that day.

When the match resumed on the fourth day, Tim Southee and Kyle Jamieson dismantled most of the batting attack, leaving England all out at 275.

New Zealand started the second innings with a lead of 100+ runs. However, they were on the clock as it was already well into day four.  Latham, Conway, Taylor, and Nicholls added upwards of 20 runs together to help the Kiwis put a respectable total.

On the fifth day at 169-6, New Zealand declared their innings, leaving England with a target of 273 runs in 70 odd overs. It was certainly an achievable target, leaving many to argue that England retreated into a defensive shell.

Burns and Sibley had a good start with Joe Root doing his part later on too. They did well to fend off the menacing bowling attack from the opposition.

All things considered, New Zealand’s bowling was simply on point with all Southee, Jamieson, Wagner, and Mitchell Santner not giving English any room to play big shots.

Ultimately, the game ended in a well-earned draw for the hosts.