After the very best and also very free T20 World Cup betting tips for the England vs South Africa game? Of course you are. Here you’ll find a summary of how both teams did in their previous match, the likely line-ups for both sides, a pitch report and some good stats.

If you’re looking for live cricket satta rates for the game, you’re about to get it so just keep on reading! The game takes place at Dubai on Saturday, November 6, start time 7:30 pm IST. Up next are our England vs South Africa betting tips!

Today’s England vs South Africa betting odds have England as favourites. But I’m going to side with South Africa here and reveal the reasons why I think they have a good shot at causing an upset.

You will also get possibly the best cricket prediction in the world on the toss winner and I’ve picked an all-rounder to take the most wickets for South Africa as the outsider of the lot. It will give us a serious profit if he wins!

Our tips are free and exclusive to Indian readers.

England were properly tested at last. They were tested when batting first against an inspired Sri Lankan attack who bowled tight lines and dismissed Jason Roy, Dawid Malan and Jonny Bairstow cheaply.

And then they were tested when England were bowling. At one stage Sri Lanka’s middle-order fought back beautifully, playing shots with plenty of intent and they came very close indeed to being favourites on live betting.

Luckily for England, they dismissed Hasaranga just when it mattered and the batsmen after him just couldn’t get going. But England will have benefited from being in a tight game after winning the first three so easily.

In the middle of all that, Jos Buttler hit the first and only century of the World Cup so far, smashing the last ball of the innings for six to end up on 101 not out.

But it wasn’t all good news. Tymal Mills, who had taken seven wickets in just four games picked up an injury and has now been ruled out of the tournament.

If that’s sad news for a player who has had so many injuries and may never get another chance to play in another World Cup, it’s also bad news for England.

It will probably mean they replace him with fellow left-arm bowler David Willey. That will improve their batting but he’s not the bowler Mills is.

South Africa are still alive and kicking after beating Bangladesh during the week.

They also improve their net run rate by getting to the total after just 13.3 overs.

Kagiso Rabada and Anrich Nortje carried on their excellent tournaments by taking three wickets each with Rabada getting the man of the match award on the back of his wickets being those of top order batsmen, because Nortje was actually more economical.

If both win or both lose, then it will go down to net run rate. If it does, it’s advantage Australia because not only are they currently ahead but theoretically Australia have the easier game.

So all to play for.

Reeza Hendricks didn’t get many runs last time out but should keep his place at the top of the order with Heinrich Klassen missing out again.

This is where England posted 164 and where Sri Lanka had a really good shot at chasing it. 160 would be considered a really good total first up. Having said that, there was lots of dew making life hard for the England bowlers in that Sri Lanka game so even 160 may not be quite enough.

Both teams will want to chase, that’s for sure. Here’s what you need to know about betting at Sharjah including some useful statistics from the stadium!

20 games between them have produced 11 wins for England and nine for South Africa. Pretty even stevens. But only because England have won five of the last six, proof of England’s vast improvement over the past few years. Before that, it was SA who were considerably ahead.

Those 5 out of 6 England wins recently were all in South Africa, by the way. 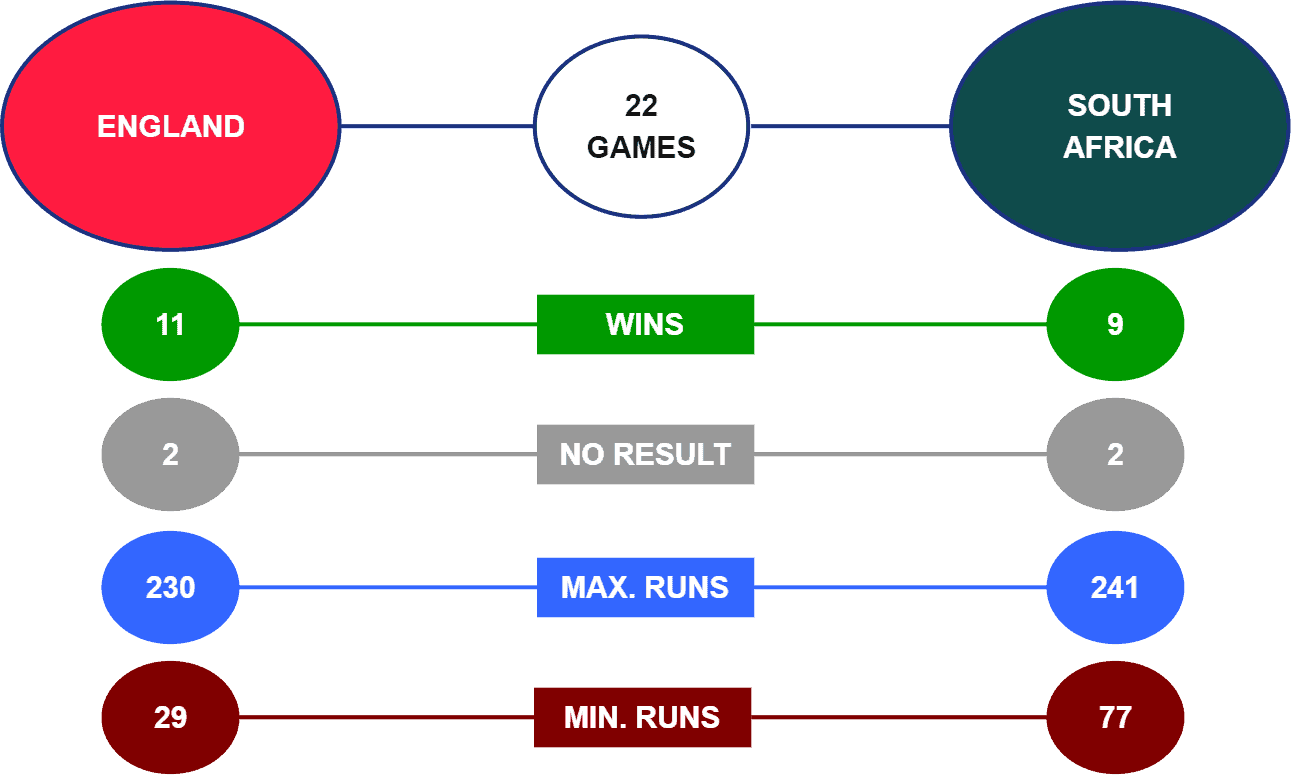 Let’s talk England v South Africa toss winner statistics. There have actually been 21 tosses between these two, not 20. That’s because one match between them was washed out after the toss had taken place.

South Africa are 11-10 ahead on tosses and have had a decent run at the toss this tournament, so let’s go with them.

The England vs South Africa betting odds are looking great for a South African win. As I’ve discussed many times in these previews, winning the toss and batting second could be a huge advantage.

Just look at that last game between England and Sri Lanka. Not only should Sri Lanka probably have won it but they would definitely have won it had Jos Buttler not played an absolute freak of an innings.

What the toss does is make it a far more even game where one side is better than the other. Few would doubt England are the better side but the toss going their way could really level things up.

But there are other reasons the Proteas could cause an upset.

They need the win a lot more than England do, their bowling has been extremely good and they might benefit from David Willey (or someone else) coming into the tournament cold after they’ve played the same XI every game.

He may just feel the pressure a bit and be expensive.

Besides, as we’ve seen already the head-to-head between these two has been extremely tight over the years.

Given he’s available at odds of 5.5, you wouldn’t have thought that Dwaine Pretorius was SA’s second highest wicket-taker in the tournament with seven wickets (only Nortje has more with eight).

But he is. He has admittedly mostly picked up cheap wickets by bowling at the death. But they all count!

And it’s the fact that he bowls at the death that plays into our hands. Because that’s when wickets tend to fall.

He doesn’t enjoy the reputation of a Rabada or Nortje or else he wouldn’t be the odds he is. But his numbers for the tournament suggest he’s a fine bet at 5.5.