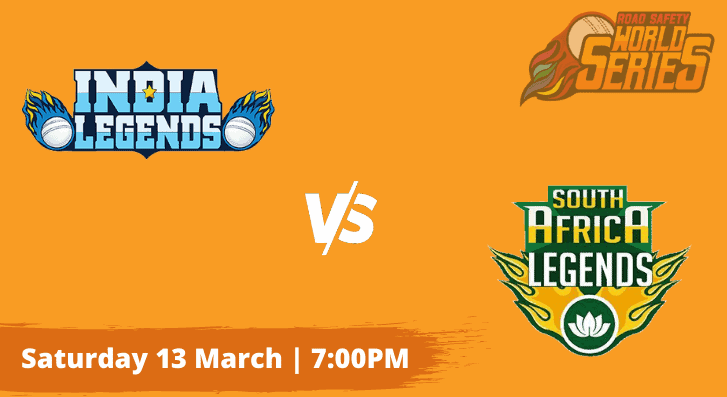 This league game will be played at the Shaheed Veer Narayan Singh International Cricket Stadium in Raipur and will start at 7:00 pm IST.

Get India Legends vs South Africa Legends predictions with the latest match odds and preview.

Read our analysis and preview for India Legends vs South Africa Legends below.

India Legends to win: Why is this a good bet?

India Legends have had quite a brilliant run in the Road Safety World Series so far, enthralling the crowd with some brilliant cricket.

With 3 wins in their last 4, the team looks primed to reach the playoffs due next week. The only defeat they have incurred so far has been at the hands of England Legends earlier this week when they lost by a narrow margin of 6 runs.

Chasing a target of 188 runs, the best they could do was reach 182, thanks to Irfan Pathan’s 61 off 34 balls. Sachin Tendulkar and Sehwag were bowled out in single digits themselves. However, in their other matches, they have been nothing short of phenomenal. Before their game against England Legends, they beat Bangladesh Legends by 10 wickets! They managed to restrict the Bengal Tigers to just 109 runs and Tendulkar and Sehwag made easy work of that.

It was a similar story in the game against Sri Lanka Legends and West Indies Legends as well.

The Protean Legends have had a decent run in the tournament so far as they sit in third place in the table with 12 points.

Most recently, they were involved in a massive, 8-wicket win against the England Legends. Bowling first, they managed to keep the England batsmen at bay, allowing them to add just 121 runs on the board. Makhaya Ntini, Zander de Bryun, and Thandi Tshabalala took 7 wickets between them.

When they came on to bat, Morne van Wyk and Alviro Peterson guided the team to this comfortable target chase.

In their opening match against West Indies Legends, the heroes were Albie Morkel and Jhonty Rhodes as they both scored half-centuries in the crucial title chase.

Moreover, the South Africa Legends are also fielding the likes of Herschelle Gibbs who is a T20 specialist.

What’s quite interesting is whenever these two teams have met in the past, during the times when these legends were representing their nations, it was always an evenly matched tie. In fact, South Africa were one of the few teams that were able to give India a run for their money back in the days.

So, the fact that these two sides meet again after all these years, we should expect a good game of cricket that can go either way.

That said, India will start as the odds-on favourite owing to their home advantage and the form of their players.

Where to bet on India Legends vs South Africa Legends

Those were our winning predictions for India Legends vs South Africa Legends.