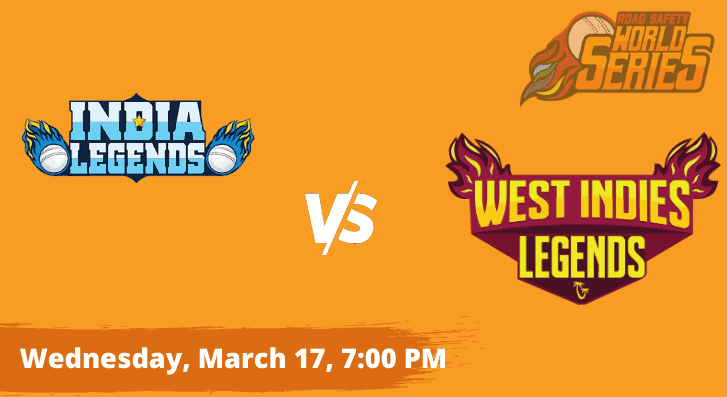 India Legends will play West Indies Legends in their semifinal match of the Road Safety World Series on Wednesday, March 17.

This league game will be played at the Shaheed Veer Narayan Singh International Cricket Stadium in Raipur and will start at 7:00 pm IST.

Get India Legends vs West Indies Legends predictions with the latest match odds and preview.

Read our analysis and preview for India Legends vs West Indies Legends below.

India Legends to win: Why is this a good bet?

Cricket fans in Raipur and India are having a gala time watching the cricket legends of India take the field once again and win with some stylish, entertaining cricket.

After all these years, the likes of Sachin Tendulkar and Virender Sehwag have not lost their touch at all, with the duo sharing over 200 runs between them already in the tournament.

Most recently, they beat South Africa Legends by 56 runs. Batting first, the Indian side put 204 runs on the board with Tendulkar and Yuvraj scoring half-centuries. Impressively, they lost just 3 wickets.

In response, South Africa reached 148-7 in 20 overs. Pathan took 3 wickets, Singh took 5 in what was another well-composed, clinical performance by the host side.

Their only defeat of the season came at the hands of England Legends by just 6 runs. In all fairness, it was a close game that came down to the wire. But apart from that, India have won their remaining matches by handsome margins.

Bowling wise, Munaf Patel has been a big boost for the team as the seamer has already taken 8 wickets in 5 games.

All in all, India Legends look solid on all fronts. Combine that with the roaring home advantage, they will start as the heavy favourites.

West Indies Legends, reaching the semis with a close win

Brian Lara led West Indies Legends reached the semifinal in style after beating England Legends by 5 wickets in a do-or-die match. The Indies were chasing a target of 187 runs and put on quite an entertaining show in the process.

In the final ball of the final over, West Indies Legends needed 1 from 1 and Tino Best got the job done. The game also saw Lara being dismissed on the fifth ball of the said over.

That win was 1 of their 2 wins the team has picked in their 5-match campaign this season. The West Indies team started with three consecutive losses to India, South Africa, and Sri Lanka.

They managed to turn the tide around only against Bangladesh Legends, beating them by 5 wickets.

Given that West Indies Legends reached the semis only by the skin of their teeth, it is hard to imagine them take on an in-form team like India Legends. Expect Tendulkar and co. to win this match and reach the final.

Where to bet on India Legends vs West Indies Legends

Those were our winning predictions for India Legends vs West Indies Legends.