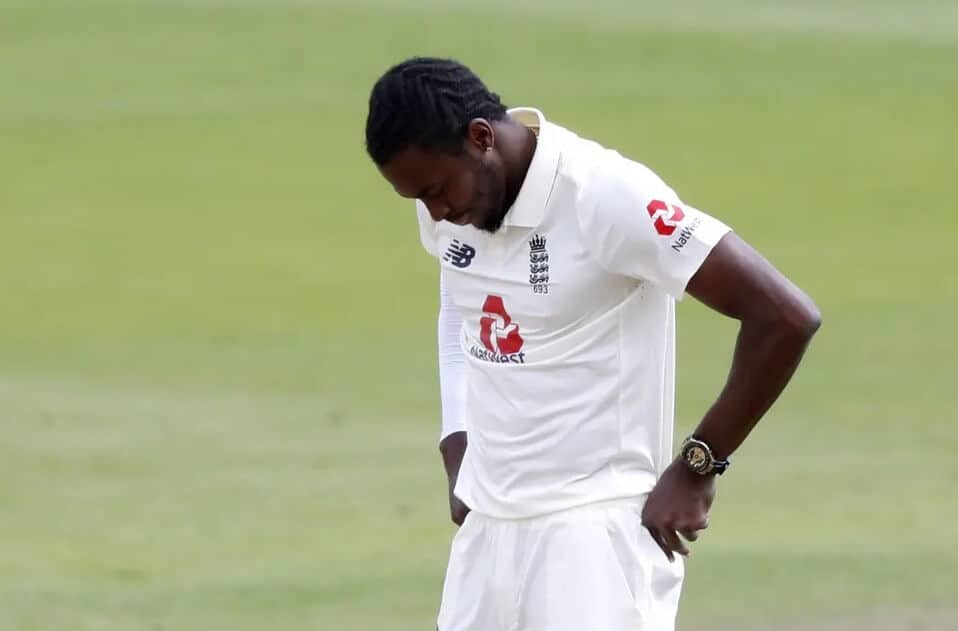 England were today rocked by the news that their premium fast bowler Jofra Archer will miss both this year’s T20 World Cup and the Ashes Series that follows it. It’s as a result of a stress fracture in his right elbow and England have taken the decision to give him as much of an extended period away from the game as he needs, in order to recover.

The talisman with chronic injury trouble

26-year old Archer hasn’t played an international match since the T20 Series in India, in March.  That was followed by surgery to remove bone fragment from his right elbow.

He returned to action in the English T20 Blast but after playing there and in a friendly, the discomfort got too much.  It’s a huge worry for a player who is still relatively young, to have such persistent problems.

The ECB may already be feeling they may have to limit his appearances to white-ball cricket, with the strain, stamina and demands of First Class cricket and Test cricket just too much for his somewhat frail body.

Archer was a huge part of their ODI World Cup success in 2019 just weeks after making his England debut, famously bowling the Super Over that allowed England to win the match, and the trophy, after scores were also level at the end of the Super Over.

England were declared the winners by virtue of having hit the most boundaries.

He also made a big contribution in the drawn Ashes series that followed, which included hitting Aussie star batsman Steve Smith on the head, ruling the former Australia captain out of that Test, and the next, with concussion.

Archer a huge loss for England

A big part of England’s strategy for the T20 World Cup was to have Archer bowl at the beginning and in the death overs, where his extra pace and ounce and occasional variations makes him both a wicket-taker and hard to get away for runs.

Online sports betting odds have England are 4.2 second-favourites with 10CRIC to win the T20 World Cup behind 3.45 favourites India. But the odds on England may start to lengthen when the severity of the news kicks in

In the Ashes, the plan was to use him more sparingly than other fast bowlers, as has been the case in the past. So to bowl him for less overs than he likes of Stuart Broad or Chris Woakes but to ask him to bowl short and at full pace when he did.

As ever, England are real money betting outsiders to win the Ashes out in Australia, with the tourists 3.1 to win the Series, the drawn Series 5.2 and the Australia Series win a 1.46 chance.

And with Stokes that makes it two

The news is the second big blow in a week for both England and…the Rajasthan Royals.

After superstar all-rounder Ben Stokes announced he was taking an ‘indefinite break from cricket’ to deal with mental health issues, this is the last thing England need ahead of those two huge events. But they’re not the only ones bemoaning their bad luck.

As it happens, both of them play for the Rajasthan Royals in the IPL meaning the team skippered by Sanju Samson will have to make do without their two biggest names, assuming Stokes isn’t ready to return to action when the IPL circus moves to the UAE.

Rajasthan made another poor start to the campaign after Stokes himself was ruled out of it after just one match, with injury. So a run to the Playoffs was looking unlikely and even more so now.

Here’s a reminder of the IPL story so far, why it was moved to the UAE and which teams the postponement will benefit the most, and the least.