The Renegades had an encouraging start to their campaign but have faded after a winning start – losing their last two. Perth Scorchers are on the opposite end of the form spectrum and lie top of the table after winning each of their first four games.

On the face of it, this looks like a cut and dry away win – but is there more to this game than meets the eye? I think so, which is why I’m going to back a surprise victory for the basement side as part of my BBL betting tips!

To find out why and get more Melbourne Renegades vs Perth Scorchers cricket betting tips and live cricket satta rates, read our full match prediction below! The action gets underway at 2:10 pm (IST) on Wednesday 22nd December at the Marvel Stadium, Melbourne.

The Renegades are yet to post a score over the 160 mark, and several stars are failing to fire.

Meanwhile, the Perth Scorchers are in red-hot form, having won all four games this season. It’s natural, therefore, that today’s cricket prediction is for the Renegades to win! Find their match-winner odds below!

The Renegades were victorious in their opening match of this tournament, but have fallen away since – inspiring fears in a repeat of last season’s horror show.

The 2020-21 bottom-placed side could not put together any sort of run last year – winning just four of their 14 games, finishing eight points off the next-highest team.

They are yet to post any kind of score this season – an inexperienced batting line-up has been failing to fire on all cylinders.

Their lack of scoring has nothing to do with Mackenzie Harvey, however! The in-form Aussie has hit 146 runs so far this season – the sixth highest in the league having played a game less.If he can find some support, then it’s possible to reason the Renegades are in a false position.

There was a huge boost to the camp this past week as Australia’s Twenty20 World Cup winning captain Aaron Finch was passed fit to play.

Finch was a guest commentator on the Brisbane Heat vs Sydney Thunder game, and confirmed he is chomping at the bit to get back out there!

He told viewers: “I’ve had one hit and it didn’t go to plan but … it takes a bit of time to get back into it after about eight weeks of not batting.

“It’s been a real down period which has been nice actually to mentally and physically refresh”.

James Pattinson is also a shout to return after sitting out the last game, though Shaun Marsh and Cameron Boyce are still absentees.

All eyes will be on the burly big hitter from Colac, Victoria. After a few months out to soak up his country’s success at the Twenty20 World Cup, he is set to take centre stage to try and lead the Renegades up the table.

His return to the side could provide the support and leadership the Renegades’ young guns are craving!

He isn’t my hot bet, but I wouldn’t blame you to back him as top batsman for the hosts! For more Melbourne Renegades vs Perth Scorchers betting tips, continue reading below!

It couldn’t have gone better for The Scorchers so far this season, with four wins from four representing the perfect start!

Last year’s runners-up have continued their blistering form and are already halfway to the total number of victories they achieved in the 2020-21 league.

In each of their victories this season, the Scorchers opted to bat first, so we’re yet to see how they will fare when chasing! That’s why I believe they are slightly over priced to get the victory here.

In-form batter Kurtis Patterson is an injury doubt for the fixture, after suffering a tightness in his left quad during his match-winning 78 runs from 48 balls against the Hobart Hurricanes on Monday night.

Cameron Bancroft is likely to return in his place.

The spinning all-rounder has been in fine form this season – collecting six wickets and going at just 6.3 an over.

He can count himself unlucky not to have more scalps under his belt and he has been performing with the blade too – against the Hurricanes on Monday night, he smashed a thrilling 30 runs from just 11 balls, including three fours and two sixes.

If the Scorchers add another mark in the victory column, there is a good chance Agar would have been at the centre of their success. It could be worth checking out Betway’s Man Of The Match market – they currently have him at 15.00 to be the MVP!

The Scorchers have the third-highest average of visiting teams at the Marvel Stadium in Melbourne at 158 across seven games contested there. That’s not all – they have won six of those seven games – the best record of any team from the Big Bash League.

The weather looks set to hold for fine conditions – though there is a stiff breeze around.

Given the Scorchers track record at the Marvel Stadium, it is hardly surprising to hear of the crushing head-to-head record they have over their opponents.

The Renegades do have recent memories of what it’s like to beat the Scorchers, though, having beat them by 7 wickets in the opening game of the season last year. 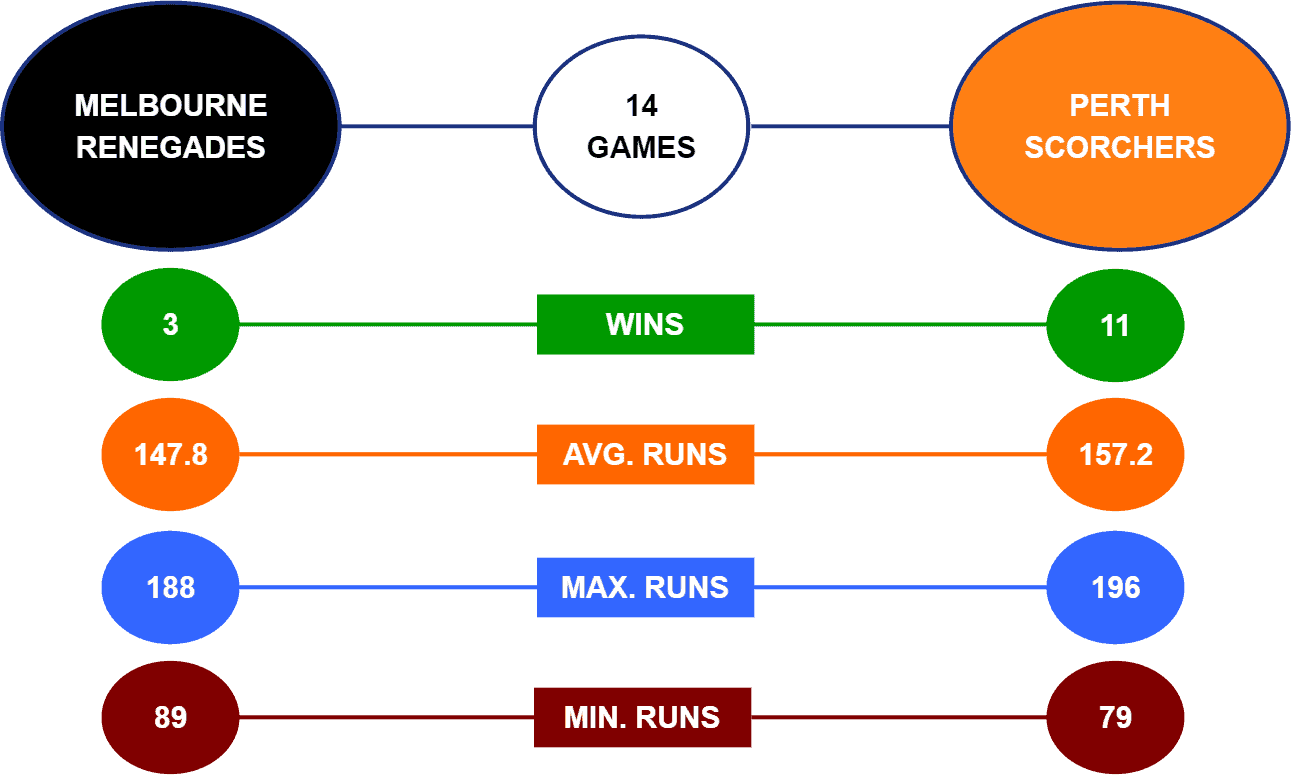 In fairness to the Renegades, their miserable Head-To-Head record is not helped by their record at the toss! Of the 14 contests, they have only won the flip five times – meaning the win probability Renegades vs Scorchers veers even further to the Perth outfit.

If they manage to call correctly here, I wouldn’t be surprised to see them bat first to try and put the Scorchers under early pressure.

I’m backing the Renegades to bag a victory at the toss!

Recommended Bet: Back the Renegades to win @ 2.38 with Pure Win

It has all been going so swimmingly for the Scorchers – but I want to see how they fare after bowling first. So far, they have been able to dictate the pace of the game by setting scores instead of chasing.

I appreciate there are plenty of ifs – but I just think the value in the Renegades is too big to ignore, particularly given they have home advantage.

While we are on the subject of value, it would be remiss to not nod in the direction of Pure Win – an online sportsbook with some of the best pre-match cricket betting markets in the game! Read our Pure Win review to find out more!

If you can strike a line through the English pace bowler’s disappointing performance in the last game, then Topley makes some appeal as the potential top bowler for the Renegades.

The lanky seamer can prove invaluable at the death and all my Renegades vs Scorchers predictions are based on the hosts batting first. If Finch and co can set a tough target, Topley will prove very difficult to get away.

Reece Topley as the top bowler for the Renegades is my hot bet!