After the very best and also very free T20 World Cup betting tips for the Pakistan v Scotland Game? Of course, you are. The game takes place in Sharjah on Sunday, November 7, start time 7:30 pm IST.

Here you’ll find a summary of how both teams did in their previous match, the likely line-ups for both sides, a pitch report and some good stats.

Find live cricket satta rates as well as the best Pakistan vs Scotland betting tips and predictions below.

Up next, a full guide on tips for cricket betting on today’s Pakistan v Scotland game. The betting odds have Pakistan as red hot favourites.

There’s no real chance of an upset so we won’t pretend there is. Pakistan are short odds but there really is no point going against them.

There are also tips on the toss winner and I’ve picked a Pakistan spinner to do the most damage and be their top bowler. It will give us a serious profit if he wins!

Our tips are free and exclusive to Indian readers.

Pakistan are unbeaten and are doing everything right.

Against Namibia, Babar Azam and to a greater extent Mohammad Rizwan were a bit slow over the first 10 overs but accelerated when needed.

Azam looked in better touch at the start and eventually got out for a well-made 70.

Rizwan was a bit cautious at the start, survived a marginal LBW decision thanks to a review and made the most of his good fortune.

He scored 24 off the final over thanks to four fours, a six and a two and is bang in contention to be the tournament’s top scorer, after I tipped him at 23.0 before it started.

The only surprise about that win over Namibia is that they only took five wickets rather than the lot when they were defending.

All of Hasan Ali, Shadab Khan, Imad Wasim and Haris Rauf took a wicket each. The other was a run-out.

Shaheen Shah Afridi was very expensive by his standards, going at nine an over. He hasn’t been quite the bowler he normally is these last couple of games.

It won’t make much of a difference in this game but it might in the semi-final.

They’ve done their best but unless something remarkable happens, they’ll end their Super campaign without a win. Their best chance was against Namibia but they lost that one.

Like a lot of other ‘minnows’, they struggle to rotate the strike and too often when they go for the big shot to make up for it, get out.

But as we’ve said all tournament, it’s not fair to compare players who are barely professionals to the world’s very best. It certainly hasn’t been for lack of trying.

That they only posted 85 against India and that India chased that after just 6.3 overs tells its own story.

150 has been about par here at Sharjah. The truth is that most of the time the batsmen haven’t made the most of what is quite a good wicket.

But the likes of Rassie van der Dussen (against England) and Jos Buttler  (against Sri Lanka) have shown you can get big scores if you play yourself in and accelerate in the death overs.

If Pakistan win the toss, they’ll probably bat first to get more practice at doing so ahead of the semi. They already know they’re good at chasing. Here’s your full guide to Sharjah.

Three games between these two have produced three wins for Pakistan. No surprises.

But they haven’t played each other in three years. 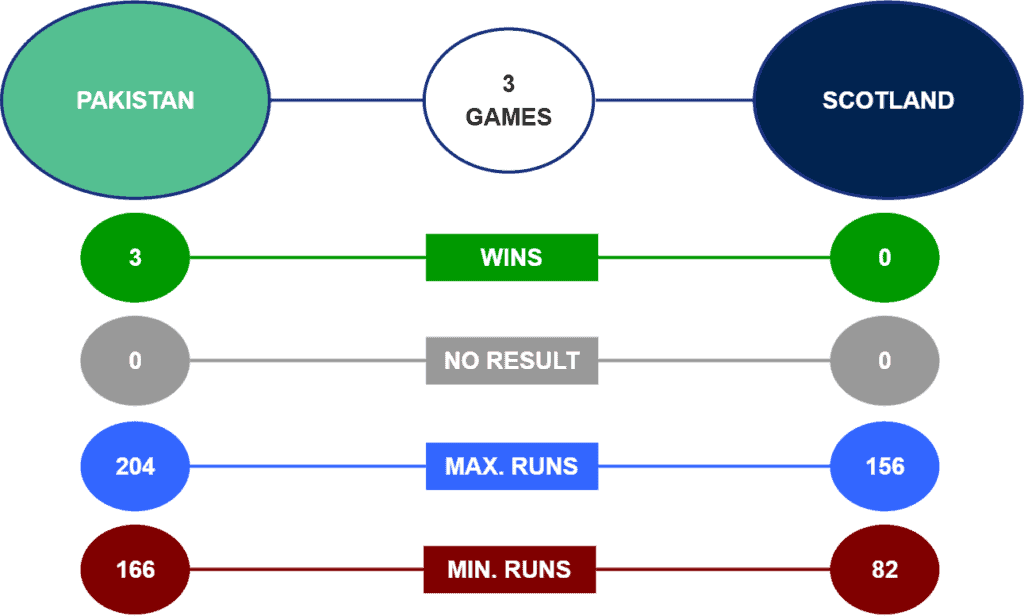 Two wins for Pakistan and one for Scotland. Add to that the fact that Pakistan have won plenty of tosses this World Cup and they’re the ones to go with.

We won’t waste too much time with this one.

This is one of the two best sides in the competition up against the weakest in the Super 12.

The chances of an upset are very, very slim and it’s not worth taking a gamble on Scotland. So we won’t.

There hasn’t been too much to choose between the Pakistani bowlers. Haris Rauf leads the way with seven wickets and is second-favourite at 4.1 to be their top bowler here, behind Shaheen Shah Afridi (five wickets), who is 3.6.

But at a much bigger 5.7, you can back Imad Wasim. He may only have four but his wicket to wicket bowling at the stumps which brings bowled and LBW into the equation may be the sort to have Scotland’s batters in trouble.

He should bowl his four overs and should give you a good run for your money at big odds.