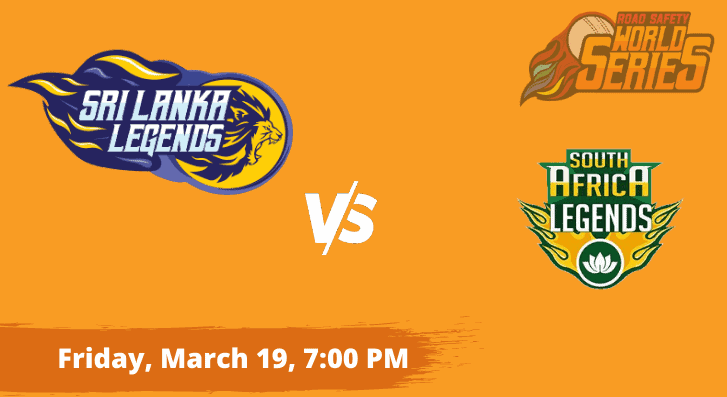 This league game will be played at the Shaheed Veer Narayan Singh International Cricket Stadium in Raipur on Friday, Match 19, at 7:00 pm IST.

Get Sri Lanka Legends vs South Africa Legends predictions with the latest match odds and preview.

Read our analysis and preview for Sri Lanka Legends vs South Africa Legends below.

Sri Lanka Legends to win: Why is this a good bet?

If there is a team in the Road Safety World Series right now that is capable of going the distance, it is the Sri Lanka Legends. Led by Dilshan, the boys have been in phenomenal form, picking up wins after wins.

Their sole defeat came at the hands of India Legends, understandably so as the opponents have significant home advantage and superior playing XI. That defeat, however, came last year before the league got scrapped.

This year, Sri Lanka Legends are technically unbeaten in the league having won their last four league games handsomely. In the opener, they beat West Indies Legends by 5 wickets.

After that, they dispatched South Africa by 9 wickets, Bangladesh by 42 runs, and England by 6 wickets.

Dilshan has superbly done his part as the captain of the team, scoring 232 runs and taking 12 wickets. He also leads the race for Most Runs and Most Wickets. Upul Tharanga has been equally brilliant. Bowling wise, Rangana Herath, Farveez Maharoof, and Dhanmika Prasad have 13 wickets between them.

All things considered, Sri Lanka Legends look superior in every aspect. They have the momentum, confidence, and players needed to reach the final.

What about South Africa Legends?

In their final league match, South Africa Legends beat their Bangladesh adversaries by 10 wickets in what was a truly dominant display of cricket.

South Africa chased that targeted down in 19.2 overs, thanks to a brilliant partnership by Andrew Puttick and Morne van Wyk. The opening duo scored a half-century each to guide the Protean to a 10-wicket victory.

That victory was 1 of the 2 wins that the South African Legends have managed this season. The other one came against England Legends by 8 wickets – this time, it was Makhaya Ntini and Thandi Tshabalala who tore through England’s batting and restricted them to just 121 runs.

As for their losses, they have come against the biggies like Sri Lanka and India Legends.

That said, South Africa do have a pretty intimidating bowling line-up. Batting wise, Puttick and van Wyk are in a decent form to add some depth to their opening order.

Where to bet on Sri Lanka Legends vs South Africa Legends

Those were our winning predictions for Sri Lanka Legends vs South Africa Legends.