More BBL betting to look forward to as it’s time for the Sydney Derby between Sixers and Thunder.  We’re at the SCG for this one.

In addition to the team news, head-to-head record, pitch report and important stats, we also have the top Sixers vs Thunder betting tips coming up next.

The best cricket betting tips are up next ahead of this BBL clash between the Sixers and the Thunder. We’re at the SCG for this one, whereas we’ll see in a second, knowing what’s a par score is easier said than done.

This could be a close contest but I’ll explain why I think the Sixers, the hosts, have the edge. I also have the usual toss winner prediction and a tip on Sean Abbott to be the Sixers’ top bowler.

A no-result and two straight losses were followed up last time out with a good win for the Sixers over the Renegades.

On a tricky wicket they managed 150 mostly thanks to a good knock by skipper Henriques.

And they defended their score admirably, dismissing both openers early and then consistently taking wickets throughout.

Ben Dwarshius was the pick of the bowlers, taking foe wickets.

They’re now into third and know that a win here over rivals the Thunder will give them a great chance of still making the Top 2.

Steve O’Keefe finally returns from injury and should slot straight back into the side, probably at the expense of youngster Todd Murphy.

He’ll partner up in the spin department with Shadab Khan, who has improved match by match.

Last time out Khan was only given one over, a bit bizarre given he’s a world class spinner.

And he didn’t start this year’s edition of the Bash particularly well, either. He particularly struggled with the bat.

But it’s hard to keep a player like him down for too long and in the last three matches he scored 73, 35 and 22 whilst also being among the wickets against the Scorchers, taking 2/14 off four overs.

True champion that he is, he may just be peaking at just the right time.

The 14.6 that he top scores for them in this game looks a decent price with 10CRIC.

The Thunder lost a see-saw match to the Hurricanes and with it, a great chance to distance themselves from their city rivals in terms of a Top 2 finish.

In the end they fell nine runs short after excellent starts from Alex Hales and Jason Sangha.

They’re now four points clear of the Sixers but if the Sixers were to win this and take the bonus point, they’d catch up with them and still have a game in hand.

They need more from Ben Cutting.

He hasn’t had the best of seasons with either bat or ball and his first all duck the other day certainly didn’t help matters.

Chris Green returns to lead the side so Jason Sangha’s stint as captain is now over.

He did a pretty good job, especially when you consider how young he is.

They may decide to play Alex Ross as a specialist batsman and drop Cutting. It would give them one less bowling option but the all-rounder really is out of form.

After a poor start to the season, Alex Hales has finally found his groove.

He’s now on 307 runs for the season and his strike rate of 146 is truly superb. He does however have just two fifties so they could do with him kicking on a bit once he’s played himself in.

This is an experienced campaigner and if they’re to win a second BBL title, you’d think they’ll need some fast stats from him as the pressure intensifies.

We’re at the iconic SCG for this one. Four matches have been played here  and first innings scores have been very different indeed.

The Sixers and the Hurricanes (freakishly) both posted exactly 213 and won comfortably before the Sixers won twice chasing far lower totals.

With uncertainty regarding what a par score is, you’d think both sides might want to chase, especially because there might be some rain around and that generally favours the chaser.

Let’s look at the Sixers vs Thunder head-to-head. This is one of the more one-sided contests in the Big Bash. The Sixers are 13-7 up over the years. The Sixers won this fixture on Boxing Day in a rain-reduced affair. 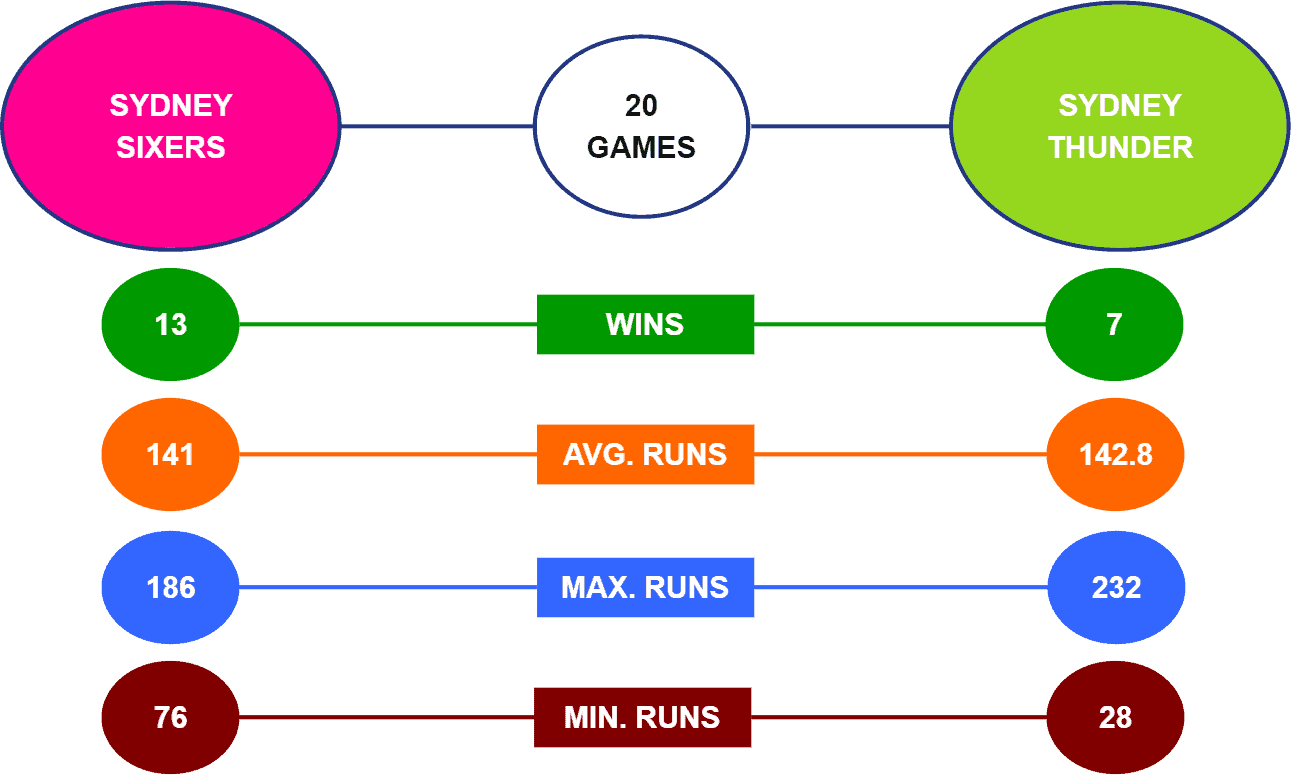 Time to look at the Sixers vs Thunder toss winner statistics. Go with the Scorchers to win it yet again.

Recommended Bet: Back the Scorchers to win @ 1.82 with Pure Win

The odds are pretty close here but I think the Sixers are the bet as slight favourites.

Their head-to-head record over the years and win on Boxing Day is proof they’ve had the better of this fixture and that extra confidence may just make a significant difference.

They’re generally extremely good on their own patch and what they showed last time out against the Renegades is that they can find different ways to  win games of cricket, always a huge asset.

In that game they won it on a tricky wicket defending but also have the tools and players to win a high-scoring contest on a better track.

It’s not the most confident selection but the men in pink just about get the nod for the Sydney Derby.

Recommended Bet: Back Sean Abbott to be Sixers top bowler @ 6.04 with 10CRIC

Sean Abbott is extremely unlucky not to have played more for Australia over the years.

His lines and lengths are superb, he’s extremely consistent and he just takes a lot of wickets.

Australia’s loss is the Sixers’ gain and he’s the leading BBL wicket-taker in history.

He’s having another strong season this time round with 15 wickets in 8 games and has been in good form of late.

6.04 is an excellent price for a player of his ability to be their top wicket-taker here.