Looking for BBL betting tips for Sixers vs Hurricanes? You’ve come to the right place! They played each other the other day and are right back in action again just a couple of days later.

In addition to the team news, head-to-head record, pitch report and important stats, we also have the top Sixers v Hurricanes betting tips coming up next.

There will be tips on the match winner market, the toss market and a Sixers top bowler selection. It’s a good one, by the way! So, everything you need to know before the action gets underway at the SCG on December 11th.

If you like online cricket betting then, keep reading.

The best cricket betting tips are up next. The Sixers won a tense and low-scoring match the other day. So can they make it two from two against the men in purple?

I think they can as the strongest-looking side in the competition, who look to have all bases covered. I’m also going to tell you which Sixers bowler looks hugely overpriced to be their top bowler.

Two matches, two wins. That makes the Sixers the only side so far who are two from two. It shouldn’t come as too much of a surprise.

The three-time BBL winners and defending champions looked the most solid side going into the tournament, partly because they retained the vast majority of the team that won so impressively last year.

And after all, they were our first of two picks to go all the way again this year.

For the second match running, there was a big contribution from skipper Moises Henriques. They would probably have won on Sunday against the Stars even if he hadn’t batted quite so well.

But they wouldn’t have beaten the Hurricanes last time out without his crucial 73 off 48 when they were really up against it.

There was also a handy 27 off 21 there from Tom Curran, who gave his skipper good support. With the ball in defence of their total of 144/9, it was a typical team effort.

Curran backed up his knock with the bat with three wickets, while Chris Jordan and Steve O’Keefe both claimed a wicket while being very economical.

Jordan conceded just 20 runs off his four overs as they won by 14 runs.

Sean Abbott will be turning out for Australia A and Ben Dwarshius is probably still unavailable through injury for this one.

Interestingly, in Abbott’s absence last time out, they decided to go with the extra spinner in Ben Manenti.

And he did a good job.

He may not look like the fittest cricketer around but he’s generally very tight and economical with his overs and 18/1 off his three overs was a big contribution to the cause.

Josh Philippe may well go on to become one of the most explosive batsmen in T20 cricket, while Henriques is the form man with back-to-back knocks of 70-odd in his first two games.

But Vince is just the sort of consistent performer that every side needs at the top of the order.

He missed out last time against the Hurricanes, scoring just 13 off 12 before getting stumped but the game before that, he hit a valuable 44 with a healthy strike rate.

It’s worth remembering this is the man who was man-of-the-match in both the semi and final of last year’s Big Bash so he’s one for the big occasions.

The Sixers did well to make sure he was around for this season as a player with almost 300 T20 appearances to his name.

The Hurricanes will be wondering how they lost the match the other day.

Even after conceding 20 or so more than they did, they really should have chased 145.

But Matthew Wade and D’Arcy Short, their two trump cards, never got going. Wade made 20 off 18 and Short hurt his side by eating up 36 deliveries for his pedestrian 21.

Peter Handscomb, last year’s stand-in skipper, was the best of a bad bunch with 47 off 31 but it wasn’t quite enough to get the team home.

Tim David, of whom much is expected after excellent progress over the last year or so, could have been the difference. But he wasn’t.

He was out for four when they needed a good cameo from him.

This is a decent-looking side but as ever, it’s very much dependent on Wade and Short getting off to good starts.

They’re missing gun batsman Ben McDermott, who is injured. How they could have done with him coming in at number three the other day.

Jordan Thompson, the England all-rounder, was in contact with someone who had Covid-19 so might be unavailable again.

England batter Harry Brook and  Aussie bowler Scott Boland are both involved in the England Lions v Australia A game so won’t be around, either.

Jordan Cox and Tom Lammonby will continue to fill in for them in the meanwhile.

Handscomb is something of the forgotten man of Australian cricket, a keeper/batsman who has had his chances for Australia in all three formats and failed to take his chances in any of them.

At 30, his chances to play for his country again may be limited, if he plays again at all.

But he’s a decent player and his knock the other day almost got them home.

He looks better suited to playing an anchor role at three than coming in and being expected to play big shots from the off at four or five.

He could do with getting that strike rate of 119 in T20 cricket up a bit, but he’s an important player for the Hurricanes.

He’s a big-looking 8.8 with 10CRIC to top score for the Hurricanes for a second successive game.

The SCG is generally seen as one of the more high-scoring grounds. Only one match was played here last year which was the final, the Sixers posting 188 against the Scorchers, which they defended quite easily.

This was also where the Sixers scored 213-4 against the Stars on Sunday so it’s clearly a good wicket.

The Hurricanes may just fancy batting first after what happened during the week, while the Sixers look to be equally comfortable batting first or chasing. That’s what makes them so dangerous.

This is one of the more surprising head-to-head records in the Big Bash. The Sixers are the joint-most successful side in terms of BBL titles but have a losing record against one of only two teams who have never won it.

It’s 8-6 to the Hurricanes now after the Sixers won during the week. 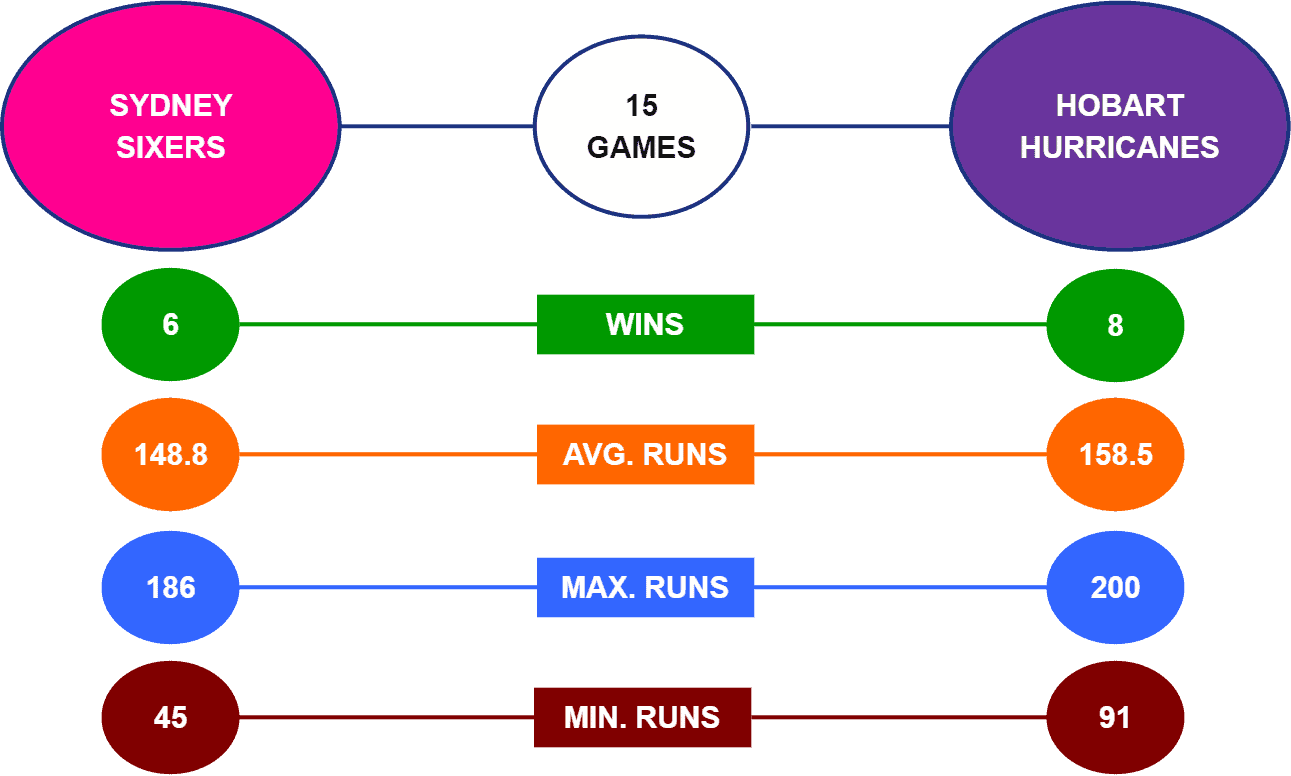 Time to look at the Sixers v Hurricanes toss winner statistics. It’s close in this regard, as well. The Hurricanes are ahead by just one coin toss over the years and got ahead by winning it the other day.

It might be time for the Sixers to level things up so go with them to win it this time round.

Recommended Bet: Back the Sydney Sixers @ 1.66 with 10CRIC

The Sixers are 1.66 to win here. It’s perfectly understandable that they’re short favourites.

After all, they’re the defending champions, have arguably the strongest team on paper of anyone, are two from two for the season and beat the Hurricanes the other day.

The Hurricanes will surely improve as the tournament progresses but they may have to wait for some of their big-name players to return.

This is a very competitive tournament and missing as many as four key players will hurt anyone.

It’s true that the Hurricanes are still ahead on the head-to-head but that may be of little significance here given the team news.

Confidence and self belief may also be a little low in the Hurricanes camp after the last match.

The Sixers simply look too strong, even if the odds aren’t the biggest on them.

10CRIC seem to be taking a massive risk when offering odds of 26.45 about Hayden Kerr to be the Sixers top bowler. Yes, he’s hardly a big-name in the Sixers camp the way that Chris Jordan, Tom Curran or even Steven O’Keefe are.

But then again, it’s not about how big your name is, it’s about how well you play. Look at it this way: the Sixers are unlikely to use more than six bowlers, with the four just mentioned (including Kerr) completed by Manenti and all-rounder Dan Christian.

Kerr has so far taken two wickets in each of his first two matches. They weren’t enough to be top bowler either time but a repeat of that could well see him do it this time.

It’s a huge price for a player with a genuine chance.