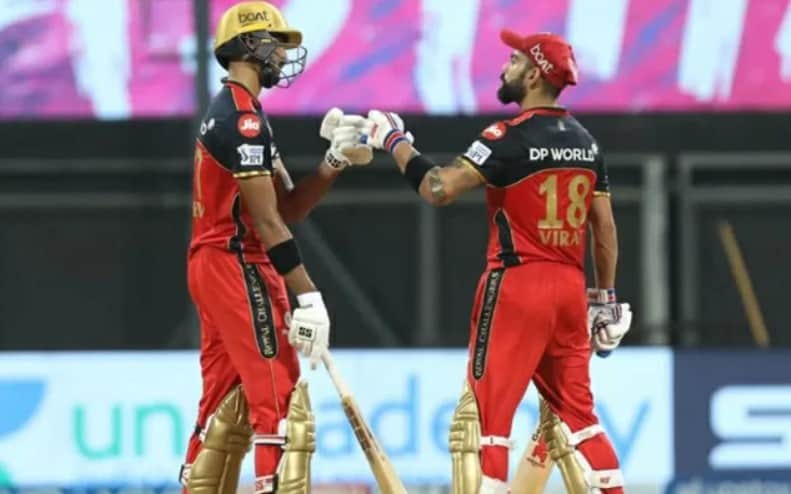 Royal Challengers Bangalore continued their flawless start in the Indian Premier League 2021 as they beat Rajasthan Royals by 10 wickets.

Devdutt Padikkal and Virat Kohli starred in the match as they chased down a big target with ease.

The fact that Rajasthan Royals have lost Liam Livingstone and Ben Stokes this season, and still managed to put upwards of 170 runs on the board, is certainly a feat worth applauding.

What is even more interesting is it was their middle order that did the job. The openers – Jos Buttler and Manan Vohra falling to Siraj and Kyle Jamieson in single digits in the powerplay.

The likes of Sanju Samson and Riyan Parag added 46 runs together. However, it was Shivam Dube and Rahul Tewatia who added some more life to the team and made the game an entertaining one.

Dube’s 46 and Tewatia’s 40 is what ultimately allowed the Royals to put up a decent score of 177 runs. In all likelihood, had both of them stayed on for longer, the score would have been close to 200.

Unfortunately, they fell to Kane Richardson Siraj respectively in the final few overs. Chris Morris and Shreyas Gopal had brief cameos toward the end.

Bowling-wise, Harshal Patel and Siraj were more clinical, picking up 6 wickets between them. Richardson, Jamieson, and Sundar got a wicket each.

Patel also bears the Purple Cap as he leads the race with 12 wickets in 4 games.

Padikkal Smashes a Century; Kohli Back in Form

After a few matches of uneventful performances by RCB’s openers, not many would have predicted Kohli and Padikkal to make a comeback in this sensational fashion.

Kohli’s half-century allowed him to become the first IPL player to cross the 6,000 runs mark in the competition.

But what was the highlight of the evening was Padikkal’s blazing century which he achieved in half as many balls.

In all fairness, there was not a lot that Rajasthan Royals bowlers could do. Despite all their best efforts, it was just not their day – if anything, the day belonged to Kohli and Padikkal.

It was undoubtedly one of the most entertaining chases this season, truly proving what Royal Challengers Bangalore can do this season.

With that, RCB now lead the IPL table with 8 points.