After the very best and also very free T20 World Cup betting tips for the Pakistan vs New Zealand game?

Good, this is the place for them and we’ll also give you the lowdown on the two teams, some cool stats and analysis of how they’ve fared against each other in the past.

This is the first match for New Zealand at the T20 World Cup and if you’re looking for online cricket betting odds for the game, it promises to be a cracker.

The game takes place at Sharjah on Tuesday, October 26, start time 7:30 pm IST. Up next are our Pakistan vs New Zealand betting tips!

Up next, tips and predictions on cricket betting markets for today’s Pakistan v New Zealand game. The betting odds have Pakistan as favourites and that’s completely right. I’ll tell you why odds of 1.75 are still very fair about the men in green and why they’re such a hard team to beat.

There are also tips on the toss winner and I’ve picked a Pakistan batsman at big odds to hit the most sixes in the game, a tip that’s especially for our Indian readers.

Pakistan put in a near-perfect performance against India on Sunday to get off to the best possible start.

It’s worth remembering two things: India were the pre-tournament favourites and Pakistan had never beaten them in either a T20 or ODI World Cup. Ever. In 29 years.

And they didn’t just beat them. They dominated the game pretty much from start to finish.

Setting the tone was the brilliant Shaheen Shah Afridi, who dismissed all of the top three: Rohit Sharma in the first over, KL Rahul shortly after and then eventually Virat Kohli just when he was looking to hit out at the end.

Unsurprisingly, his three-wicket haul of the top order earned him the man-of-the-match award.

And if Afridi did most of the good work with the ball (all the other bowlers chipped in as well) then it was the Babar Azam and Mohamamd Rizwan show with the bat. Azam ended unbeaten on 68, Rizwan on 79.

It really was an immaculate performance and Pakistan are now in a three-way tie as favourites alongside India and England.

The Kiwis are yet to get under way and the last team they’d want to have to face now are a buoyant Pakistan.

But New Zealand have their gameplans and if there’s one thing we know about them, it’s that they’ll play well as a team.

That includes such things as fielding like their lives depend on it and backing each other up.

They come into this tournament with two fine spinners in Mitchell Santner and Ish Sodhi and that will be important. Even more important could be the first two overs from Trent Boult.

They’ll need to dismiss one of those two brilliant Pakistani openers quickly and Boult is their best shot at that. Or the rapid Lockie Ferguson.

They should try and find a place for Mark Chapman, the player with the best boundary percentage in the side. But he may have to wait for his turn.

Sadly for us gamblers, Sharjah is a bit of an enigma. Sadly because the better we can work out what a wicket might do, the better a chance we have of predicting what might happen and betting accordingly.

Just as an example, it was an extremely low-scoring ground in the IPL this year, with only three of the 10 teams batting first scoring more than 140.

This trend was backed up when Ireland played Namibia on Friday, the Irish scoring just 125. It was chased quite comfortably.

But then all that went out of the window when Sri Lanka beat Bangladesh on Sunday. Not only did Bangladesh post a big score of 171 but Sri Lanka chased it with more than an over to spare.

To make matters even more complicated, the trend has been for sides batting first to win rather than the conventional wisdom that it’s good to chase in the UAE.

But captains are wary of dew, so whoever wins, will probably want to chase. We’ll have to wait and see.

Here’s our full guide to betting at Sharjah if you want to find out more.

These two have played each other 24 times, which is quite a lot given T20s have only been around since the mid-noughties.

Pakistan are 14-10 ahead. Pakistan won the last one, New Zealand the one before that. But before that victory for the Black Caps, the men in green had won five in a row.

When they chase, it’s 5-5 in terms of wins but when Pakistan have batted first, it’s been 9-5 in their favour. 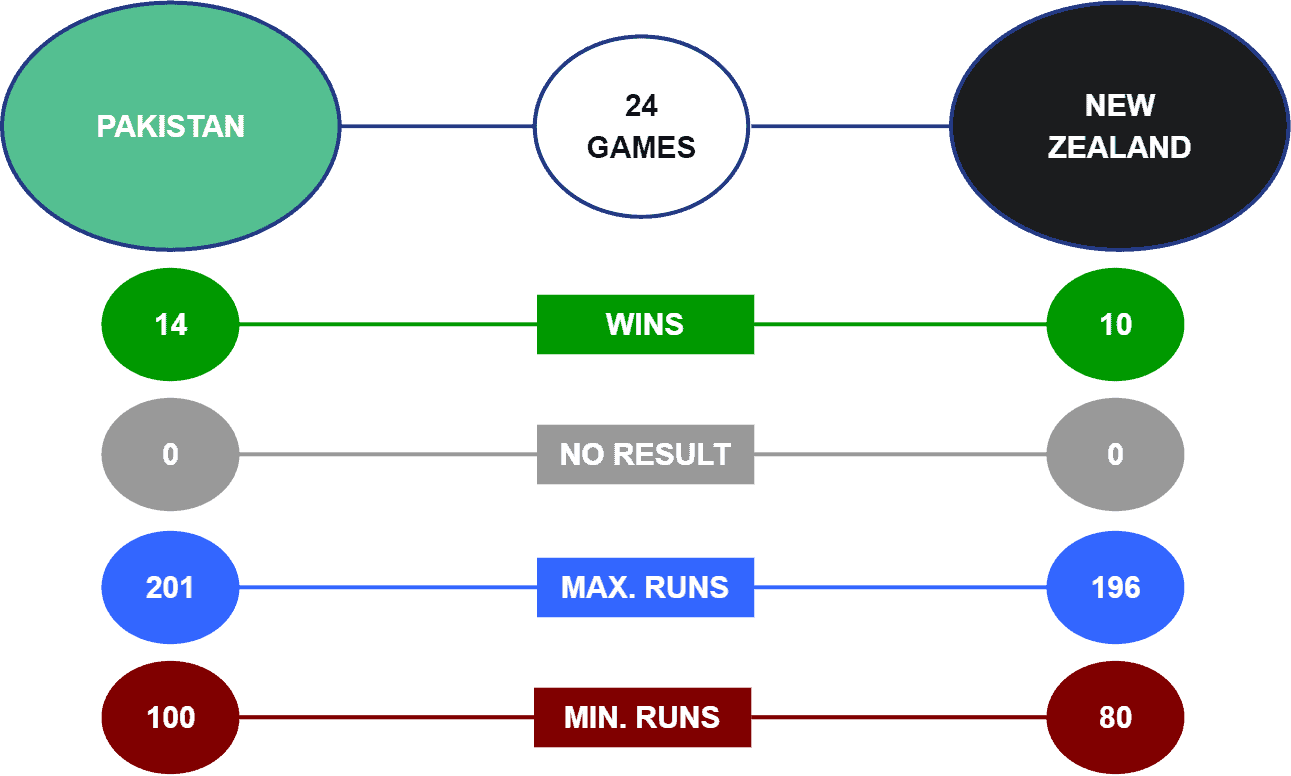 Time to look at some Pakistan v New Zealand toss winner statistics. If the margin of wins between the two is quite big in wins, it’s even bigger in terms of toss wins.

Pakistan have won two out of three tosses over the years and are fresh from winning the all-important toss against India. So let’s put our faith in Babar Azam to good again.

They have a superior head-to-head record, they know UAE pitches much better than the Black Caps do and they were mightily impressive in beating tournament favourites India.

The one fly in the ointment would be a toss bias. A toss bias is when batting first or chasing gives you a massive advantage before a ball is bowled.

But even that’s not the case here because as discussed, the historical trend has been for sides to win more games batting first. Yet, chasing has been the way to go and dew could play its part.

We simply have to go with the favourites here who are already into the tournament and know what to expect at Sharjah.

And here’s our Betway review, by the way.

Recommended Bet: Mohammad Rizwan to be Player to hit Most Sixes @ 6.5 with Betway

Mohammad Rizwan was absolutely sublime in that chase against India. It was almost the perfect innings.

He accumulated runs by rotating the strike and running well while also finding the boundary the minute they started getting behind the run rate.

That included hitting three sixes, more than anyone else in the game managed.

And at 6.5, he’s a good bet to repeat the trick. We know he’s in fine form, knows these grounds well and has the big shots in him.

There are some big-hitter like Falhar Zaman and Martin Guptill out there. But Rizwan is more likely to be at the crease for longer and that could make all the difference.