Pakistan will host New Zealand for the first time in 18 years for a bilateral ODI series and T20I series starting this week as the hosts look to navigate precarious times.

The first one-day international will be played on Friday, September 17, at the Rawalpindi Cricket Stadium in Rawalpindi, at 3:00 pm IST.

Get Pakistan vs New Zealand online cricket betting tips with the latest odds and predictions.

Let’s take a look at today’s cricket betting tips for this historic match between the two cricket heavyweights.

New Zealand are coming off their first-ever series loss to Bangladesh while Pakistan, being the hosts, will start as the favourites owing to the home advantage.

The series will not count towards the ODI Super League due to the absence of DRS and consequently, may not serve as anything more than a practice run ahead of the T20 World Cup in October.

However, for the hosts, this serves as a litmus test and a statement to the rest of the cricket world that they are ready to welcome big sides.

I’m going to back a win for New Zealand here for reasons we will see below. All in all, we are in for a thrilling game of cricket with several boundaries and sixes on the cards.

Subscribe to Bet India’s Telegram channel for all the latest updates in the world of cricket.

The fact that Pakistan are hosting the two-time ICC World Cup finalists and the No. 1 ODI team in the world on their home soil says a lot about the tangible progress they have made in resuming international cricket action in the country.

New Zealand’s last tour of Pakistan was in 2003 – a series that was cut short halfway through following tumultuous events. 18 years later, the Kiwis look all set to play Pakistan again in the country.

That said, the hosts are certainly in for a challenge. The cricket scene in the country is going through a transition – Ramiz Raja has been formally elected as the Pakistan Cricket Board chairman – shortly after the announcement, Misbah-ul-Haq and Waqar Yonis resigned from the coaching roles of the Pakistan National Cricket Team. Saqlain Mushtaq and Abdul Razzaq now serve as interim coaches for the New Zealand series and possibly, the World Cup next month.

As for Pakistan’s ODI form, the memories are still fresh from that 3-0 whitewash at the hands of England this summer – but the preceding ODI series wins over Zimbabwe and South Africa keep alive the promise of a good cricket show.

Coming to the squads, Pakistan have got their A-Team in line as Babar Azam, Fakhar Zaman, Hasan Ali, and others are likely to be in the starting XI. Shahnawaz Dahani may be handed his ODI debut while Shaheen Shah Afridi, Usman Qadir, and Shabad Khan will lead the bowling attack.

The Kiwis are coming fresh off a 3-2 loss to Bangladesh in the T20I format. All five matches were played at Mirpur under conditions that proved to be quite inconvenient for batters. The Australians were beaten a few weeks on the same turf before and it wasn’t really surprising to see New Zealand incur a similar loss.

But the fact that they have been in Asia for quite some time now means they are well-suited to the conditions. Moreover, this Pakistan series serves as an excellent opportunity for the visitors to get acclimatized to the conditions even more ahead of the World Cup in UAE.

New Zealand’s ODI exposure has been rather limited since that loss in the 2019 World Cup to England. They have hosted India and Bangladesh at home since, with the series ending in a clean sweep for the Kiwis.

Now they turn their sights to conquering Pakistan – a challenging order no less with the absence of Tom Blundell (due to injury) and several main-team players (participating in the Indian Premier League).

Rachin Ravindra, Finn Allen, Ajaz Patel, Matt Henry, among others will need to be at their best. There is a decent amount of experience, pace, and depth in this seemingly fresh New Zealand squad that should make for an intriguing series in Pakistan.

No rain is predicted for Friday in Rawalpindi – which means we are in store for a full game of cricket. Being a day-night match, dew may play a part in the second innings.

As for the pitch, the last few ODI matches here have seen some decent scores of 250 runs and above. The track appears to be batting friendly and is nothing like the one in Mirpur.

The two sides have met no less than 108 times in the ODI format. New Zealand have won 48 times while Pakistan are at 55. Their last bilateral series was in the UAE in 2018 – it was tied at 1-1 with the deciding match in Dubai ending without a conclusion. 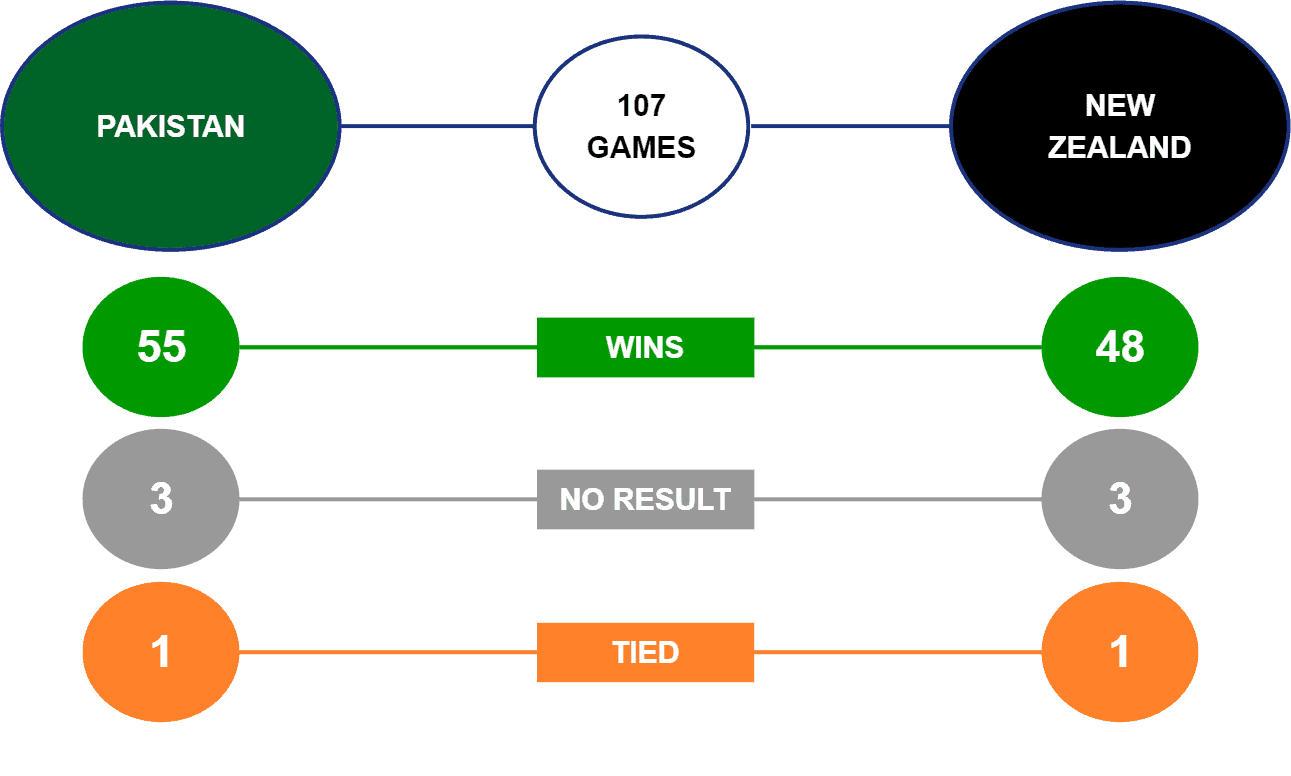 New Zealand have had better luck in the toss department as they lead 58-48.

I’m going to back Pakistan here to narrow that gap and win the toss on Friday.

There is no doubt that Pakistan will start as the favourites owing to the heavy home advantage and a full-strength squad. But let’s not forget that New Zealand are the No. 1 ODI team in the world – you don’t build that kind of reputation without some serious depth in your batting and bowling.

Granted that the Kiwis are without many of their main players but in Tom Latham, Rachin Ravindra, and Will Young, they hold a lot of batting potential. The latter two are still fresh when it comes to one-day international cricket but going by their performance in first-class events, they should rise to the occasion.

As for bowling, Matt Henry, Cole McConchie, and Ajaz Patel are expected to continue their fine form and build on their experience further. McConchie and Patel took 17 wickets between them in the five T20Is in Dhaka.

Another reason why I’m backing New Zealand here is owing to the ‘transitionary’ phase that Pakistan cricket is going through at the moment. With new coaches at the helm and a shaky ODI form, it can prove to be a bit tricky to get a win right off the bat.

You can also check out our 10CRIC review to see why we favour this operator for cricket betting in India.

Babar Azam has hit 657 runs in his last 10 ODI matches. His last white-ball match was against England where he struck 158 runs in Birmingham.

He is an exceptional batter for Pakistan and seeing that he comes on early, he will have plenty of time to build a solid inning and possibly, show the way as Pakistan’s top batsman on Friday.