Pant, Curran and Billings go from rivals to IPL team-mates 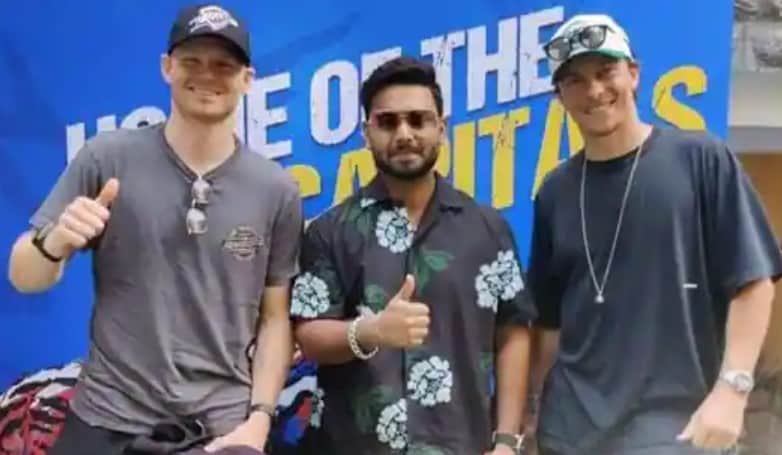 Rishabh Pant, Sam Billings and Tom Curran have met up at the Delhi Capitals’ training camp ahead of IPL 2021 after being on opposite sides in the recent T20 and ODI Series between India and England.

They’ll have very different roles to play when it all gets underway.

Curran and Billings quiet, Pant was on fire

Having been on opposite sides during those two limited-overs Series, both won 2-1 by India, the trio now find themselves representing last year’s runners-up, the Capitals, in the IPL.

Bowler Curran and wicket-keeper batsman Sam Billings both had quiet Series where they weren’t able to make a huge impact.

To make matters worse, Billings suffered an injury in the 1st ODI, which ruled him out of the next two matches.

Pant on the other hand, carried on from where he’d left off in the Test Series. He played all five T20Is, striking at an average of 129, and in two of the three ODIs that followed.

He was on fire in the last two games of the Series. His 77 in the second ODI wasn’t enough to avoid defeat but his 78 in the Third ODI was a crucial knock in getting India towards a total that England fell just seven runs short of.

Pant with plenty on his plate

Pant will be the Capitals’ key man this season. In addition to keeping wicket, he’ll also be one of their most important batsmen coming in at 3 or 4.

To further add to his workload, he may well be asked to captain the side by coach Ricky Ponting, Now that Shreyas Iyer has been ruled out for the whole season, someone will need to step in as skipper.

Pant is probably the favourite but both Shikhar Dhawan and Ravi Ashwin have been in charge of IPL sides before and could be better options to ease Pant’s workload.

Curran and Billings may not play

However, in the cases of Billings and Curran, they may have to be patient for their chance.

As ever, only four overseas players can feature in any given game in the IPL. Kagiso Rabada will always play and they love the balance that Marcus Stoinis provides as a premium all-rounder.

If fast bowler Anrich Nortje also plays, which he probably will after such an impressive season last year, that only leaves one final overseas spot.

And there are no shortage of candidates to fill it. Billings and Curran are joined by batsmen Steve Smith and Shimron Hetmyer, plus all-rounder Chris Woakes, as those looking to fill that final spot.

The Capitals are 6.5 second-favourites with Betway to win their first-ever IPL.