Looking for BBL betting tips for Stars v Sixers? You’ve come to the right place! The Scorchers come here with an unbeaten record (3/3) while the Hurricanes are struggling with just the one win to their name so far.

There will be tips on the match winner market, the toss market and we’ve picked a good Scorchers top bowler selection, as well. So, everything you need to know before the action gets underway at the Bellerive Oval in Hobart on December 20th.

If you’re looking for live cricket satta rates for the game, then keep reading.

The best cricket betting tips are up next. The Scorchers are ‘scorching’ favourites but for a reason. I’ll explain why they’re currently superior to the Hurricanes in all regards and should make it two from two against the men in purple, after already beating them the other day.

There’s also a good bet on the Scorchers’ overseas fast bowler, in fine form, to take the most wickets. Plus my prediction of who might win the toss.

So far so good for the Scorchers. Three games, three wins. The last match saw them post 182-5 against the Hurricanes, mostly thanks to a brilliant 100 not out from Mitch Marsh.

Marsh, who gave up the captaincy at the start of last year’s campaign to Ashton Turner, hit five sixes and two fours on his way to his second T20 century, which was also the third century of this year’s Big Bash.

The reason we mention that is there were only three centuries in the whole of last year’s edition.

The match was a successful Scorchers debut for Tymal Mills.

He took 3-23 including dismissing dangerman Ben McDermott and if he can stay fit for the remainder of the campaign, it will be a huge boost to the Perth side, who have lost Jyhe Richardson to Ashes duties.

So impressive have the Scorchers been that they’re now favourites to win this year’s edition of the Bash.

The Scorchers may have to wait till the back end of the tournament to get Richardson back.

He’s currently on Ashes duty and with players getting injured or tired, he may yet play quite a bit more in the Series, even if the man he came in for- Josh Hazlewood- recovers from his injury.

Marsh’ return to the side meant Cameron Bancroft was the unlucky man to miss out and that’s likely to be the case again here.

But they may make some changes to the batting order even though they have an 100% record.

They opened with Kurtis Patterson last time out (who got 13) but both English import Laurie Evans and keeper/batsman Josh Inglis, not needed by Australia’s Ashes team, look better suited to open alongside Colin Muro.

Agar has been at the Scorchers forever. He’s played 54 games for them over the years and has cemented his place in the team as a bowling all-rounder who bowls left-arm orthodox while also able to hit some big shots from number eight.

37 wickets from those 54 matches suggests he’s not the most prolific wicket-taker around but he’s extremely consistent and reliable and an economy rate of 7.28 proves batsmen don’t tend to get after him.

He’ll rarely have a stand-out game where he turns the match on its head but many years of success for the Scorchers included solid performances from him. By the way, he’s the older brother of fast bowler Wes Agar, who plays for the Strikers.

It’s a big-looking 10.56 with 10CRIC that he’s their top bowler against the Hurricanes.

It’s something that rarely happens but at least he’ll give you a good run for your money because he almost always bowls his four overs.

It hasn’t been the start the Hurricanes wanted. Three matches and just the one win, that one secured when Matthew Wade and D’Arcy Short both went big against the Sixers. They’d lost the match before against the men in magenta.

But they lost to this very team last time out with their bowlers unable to stop Marsh and his big bat from scoring that century.

It wasn’t an impossible total to chase but once again, neither Wade nor Short fired at the top of the order and when that happens, they often tend to struggle.

They wouldn’t want to be playing this lot yet again because it could easily be one win from four after this one. Then again, they will have played the Scorchers twice and the Sixers twice, the toughest sides in the competition. So it will get easier after this.

There can’t be any excuses now because just about all their players are available. Harry Brook came in last time after playing for the England Lions, Ben McDermott is also available and Riley Meredith is on his way back from injury, as well.

But Meredith may not yet be ready to feature here just yet. They will however be without Joel Paris for a few games, after he got injured in the last game against the Scorchers.

One thing they should think about is promoting Tim David up the order. Yes, the likes of Peter Handscomb and Harry Brook are good players but they don’t have the power David has when it comes to going big in the death overs.

He certainly shouldn’t be batting at seven.

He’s been unlucky that Australia have had plenty of classy top-order batsmen in limited-overs cricket, while the likes of Alex Carey and Matthew Wade have been good with the gloves.

And by the time those two call it a day, McDermott will have the Sixers’ Josh Philippe to contend with.

But the best thing he can do is carry on scoring runs in the BBL.

62 games have seen him score seven fifties and a century against the Renegades a couple of years ago. On the day he got to 114 to guide his side to victory in an unlikely chase.

His best position is as an opener but he’s not likely to get the chance to bat there with Wade and Short around.

But at three he has the chance to impress and with a long batting line-up, he can afford to be aggressive rather than just anchor the innings. It’s 4.5 with Betway he top scores in this match.

It’s worth remembering that due to particularly tight quarantine rules in Western Australia, Perth won’t be playing at home for this year’s BBL.

So we return to the same venue as where the teams played just a few days ago.

The 182 the Scorchers posted is about par for Hobart. This is the high-scoring ground where Wade and Short have scored so many runs over the years.

Perth skipper Ashton Turner was smart at the toss last time out, choosing to bat first.  That’s generally the way to go here.

Considering the Hurricanes’ sole win came batting first and that’s surely what they’ll want to do if Wade wins the toss, this time.

The Scorchers are 10-6 ahead on the head-to-head. They’ve now also won each of the last four in a row including, of course, that win last week. 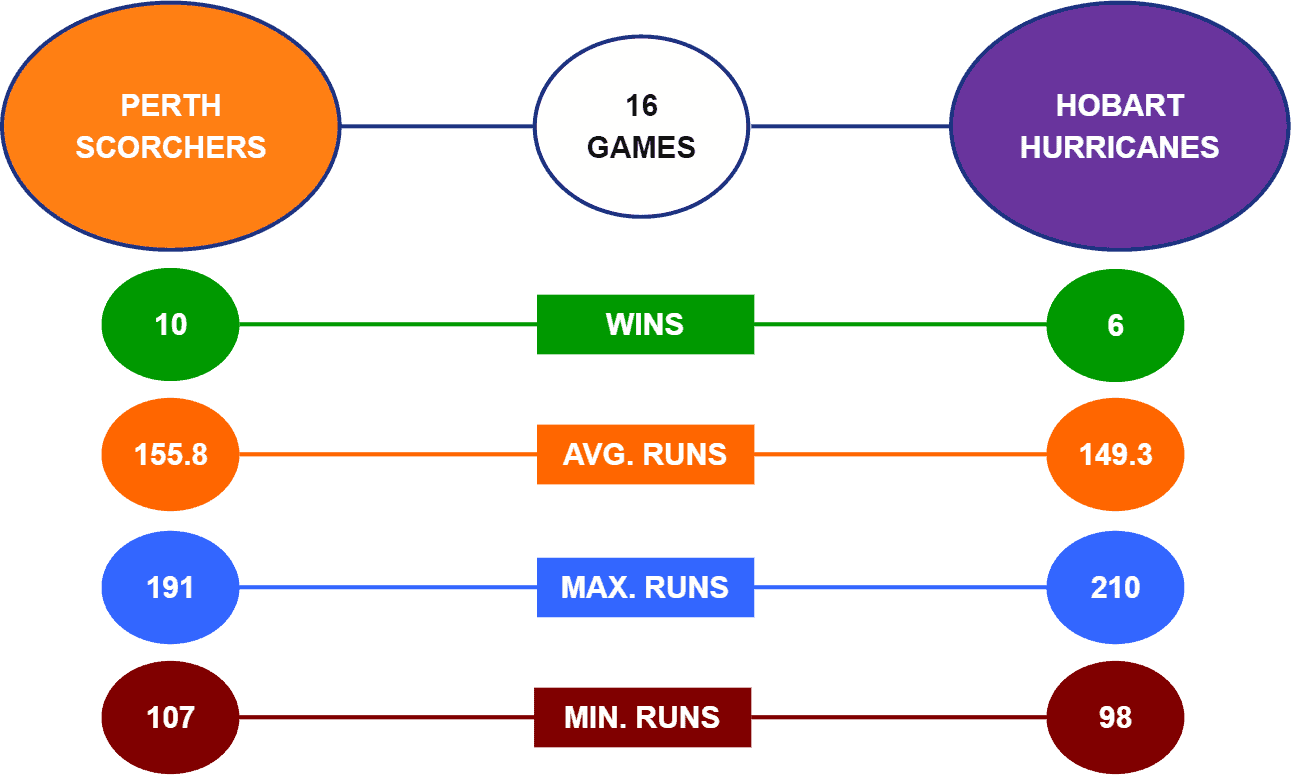 Time to look at the Stars v Sixers toss winner statistics. Interestingly, the toss record between these two is exactly the same as the head-to-head, the Scorchers leading 10-6 in this count, as well.

The Perth outfit won the toss the other day but it might just be time for the Hurricanes to bite back so go with Matthew Wade to emerge victorious with the coin this time.

Recommended Bet: Back the Perth Scorchers @ 1.62 with Pure Win

It’s hard to make a case against the Scorchers here.

They’re unbeaten this season, gave the Hurricanes something of a beating in this fixture a few days ago and are considerably ahead on the head-to-head over the years.

There was a bit of a concern that there were a few too many personnel changes that might disrupt them this season but that just hasn’t been the case.

Two of their stars from last season- Marsh and Munro- have already hit hundreds so are obviously in form.

Two new bowlers in Peter Hatzoglou and Tymal Mills have both started well while the Scorchers ‘veterans’ like Agar, Jason Behrendoff and Ashton Turner have all been doing their thing.

Yes, the Hurricanes are at home and that might help but then again, they were at home last week and still lost comfortably. The injury to the impressive Joel Paris, who used to play for the Scorchers won’t help their cause.

So with the Scorchers holding all the trump cards, they’re the ones to go with.

If Tymal Mills had stayed fit for most of his career, he’d be right up there with the most prolific wicket-takers in limited-overs cricket.

But sadly, it’s been one injury after another, the latest ruling him out of England’s last few games at the World Cup.

But when fit, he’s a class act.  A strike rate of 18 in T20 cricket is extremely impressive and two things set him apart: he’s a left arm bowler so can use the angles to good effect and he’s genuinely quick. Right up there with the fastest bowlers in the tournament.

He took three wickets in his only match so far in the BBL- against the Hurricanes- and could well be in the wickets again here.