More BBL betting to look forward to ahead of this year’s Big Bash big final. It pits the Scorchers and the Sixers up against each other and whoever wins, will become the first BBL team to win four Big Bash titles.

In addition to the team news, head-to-head record, pitch report and important stats, we also have the top Scorchers v Sixers betting tips coming up next.

All in all, you’ll have everything you need to know before this big game gets underway. If you like online cricket betting, keep reading.

The best cricket betting tips are up next and if the odds suggest this could be quite one-sided in favour of the Scorchers, that’s because that may well be the case.

I’ll explain why the Perth side are the bet and why they hold all the trump cards. We’re at Melbourne Docklands for this one, a high-scoring ground where batting first is generally an advantage.

I also have the usual toss winner prediction and I’ll explain why the incredibly consistent and experienced Sean Abbott is a good bet to be the Sixers’ top bowler.

If the Scorchers go on to win this year’s Big Bash, and they’re strong favourites to do so, they will be extremely deserving winners.

They topped the Group Stages comfortably and absolutely demolished the Sixers in the Qualifier.

That they bossed the Group Stages while missing a load of top-class players tells its own story.

Mitch Marsh, one of T20s most in-form batsmen was on Ashes duty, as was dangerous batsman Josh Inglis.

Colin Munro was injured for three games and they had to make do without last year’s BBL top bowler Jhye Richardson for all their Group games.

Against the Sixers, Kurtis Patterson and Josh Inglis both got fifties in rapid time and Mitch Marsh added a valuable 28 off 21.

They then took early wickets and never looked back. They look one of the more complete T20 teams we’ve seen in a while.

Not too much to report. Mitch Marsh had a bit of a hamstring niggle in that Qualifier match but seems to be fine now.

With no other injuries or Covid outbreaks, there’s no reason why they won’t field the same XI that beat the Sixers so convincingly the other day.

Richardson ended up only playing one Ashes Test and impressed with five wickets in the second innings, before getting a slight injury.

He then missed out on the other matches as players returned from injury and were preferred to him but he was kept on stand-by, much to the frustration of the Scorchers.

But he came good when he finally did play for them in the Qualifier.

He took two wickets for just 21 runs and they weren’t just any wickets: they were Philippe and skipper Moises Henriques.

His extra pace and bounce and aggression make him a lethal operator and he’ll be eyeing up another destruction of the Sixers’ top order here.

The Sixers are a good example of a side who just have a knack for winning. And the greater the pressure they’re under, the bigger the game, the more likely they are to edge a tight one.

And things were certainly tight in their win against the Strikers. With just one ball left in the Sixers’ innings, all three results were possible.

A dot ball and the Sixers were out, a single and they were going to a Super Over and two or more and they were through. It would have been tight for a two if the throw from the boundary had come in nicely to the keeper.

But it didn’t. There was a mis-field a metre or so from the rope, it went to the boundary and that was that.

The winning runs came from the bat of Hayden Kerr, who when it came to batting at least, almost single-handedly won them the game.

‘Almost’ because Sean Abbott played a gem of a cameo to get them back in the game.

His 98 not out was the difference between the two sides and even more remarkably, he did so as an opener.

Remarkable because he’s been batting at seven or eight all tournament and as an all-rounder, can’t have opened much in his career.

The Sixers restricted the Strikers to what was a par score but given they took three early wickets, ended up chasing more than they should have.

The big news ahead of the game was that star batter Josh Philippe was out of it after getting Covid. It can’t have come at a worse time.

They were also without the experienced Daniel Hughes, who failed to recover from an injury in time.

Lenton, believe it or not, is the Sixers’ assistant coach and only came in to play because, well, they didn’t have anyone else.

Carder played his part to an extent, making 13 off 10 with the bat.

Philippe won’t recover from Covid in time so Carder will keep his place. But Hughes should be ok for the game after having two more days to recover.

But now they have a new problem.

Jordan Silk got injured during the game and will probably miss out meaning either Carder will have to swap the bench for the field again or they’ll have to rope in another grade cricketer.

The 25-year old is a proper late bloomer, having only played one First Class game, two List A games and 21 T20 matches in his whole career.

What a tournament he’s had. With 24 wickets so far, only Peter Siddle has more (30). And prior to Wednesday’s win over the Strikers, he was at best a lower-middle order batsman who could give it a bash.

We’ve seen all tournament he can certainly bowl at this level but if he can also play the sort of mind-boggling innings he did with that 98 not out, some will think he could be the next Marcus Stoinis or Mitch Marsh.

He’ll surely open the innings again with Philippe out with Covid.

It will be virtually impossible to replicate that sort of performance again but the 6.61 he top scores for them again with 10 CRIC will attract some interest.

As we’ve said several times before, this is a perfectly good wicket here at Melbourne Docklands, also known as the Marvel Stadium.

I was a bit surprised the Sixers decided to bowl first against the Strikers, but it worked out well for them (just). Will they try the same tactic if they win the toss again? The smart money is on the Scorchers batting first should Ashton Turner win the toss.

Let’s look at the Scorchers v Sixers head-to-head. 23 matches between the two has seen the Scorchers win 14, the Sixers nine and there’s been a tie…which the Scorchers went on to win in a Super Over. So strictly speaking, it’s 14-9.

The Scorchers won both matches played this season in the Group Stages and then again in the Qualifier, of course. So it’s been all Scorchers recently. 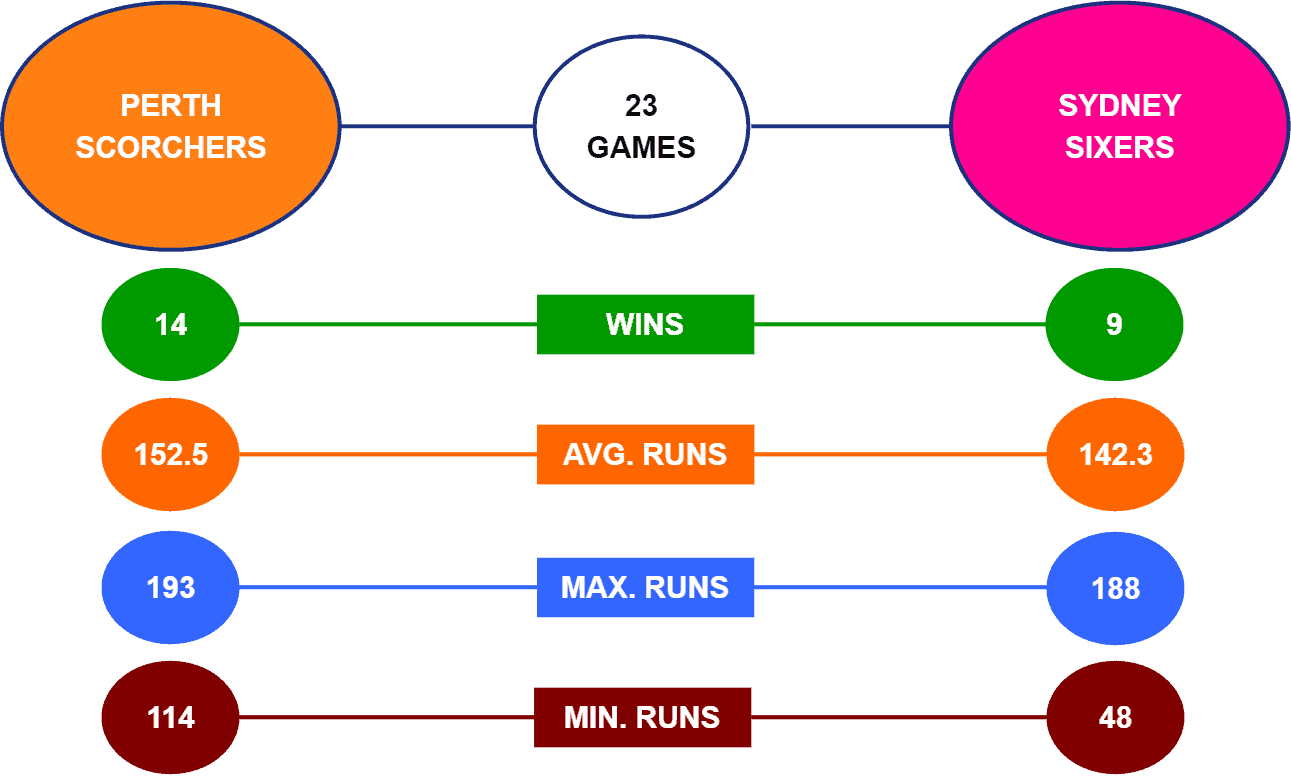 Time to look at the Scorchers v Sixers toss winner statistics. The Scorchers are way ahead in this regard. Which may help to explain why they’re also ahead on the head-to-head.

However, we think the Sixers can get the best of the coin this time round.

Time to look at the Scorchers v Sixers toss winner statistics. The Scorchers are way ahead in this regard. Which may help to explain why they’re also ahead on the head-to-head.

But it may be time for the Sixers to hit back on the toss winner, so let’s go with them.

Recommended Bet: Back the Scorchers to win @ 1.39 with Pure Win

Betting short-priced favourites isn’t for everyone. Betting 100 Rupees to win 39 profit may not seem a good idea to most. Fair enough.

But it really is hard to make a case for the Sixers here as 3.05 outsiders. Look, they’re missing their best batsman (Philippe), they may be missing another experienced in Hughes, Silk and Henriques will either not play or will play half-fit. So their batting is at 50%, at best.

They do admittedly have an excellent bowling line-up but all of the likes of Kerr, Lyon, Abbott and co would have to absolutely have to play out of their skins for them to have a chance.

Add to the equation how the Scorchers have all their best players available and how so many of them are in form, plus the big positive record on the head to head for the Scorchers and you can see how we can’t side with the Sixers.

Good on the Sixers if they somehow pull it off, but it’s highly unlikely.

Recommended Bet: Back Sean Abbott to be Sixers Top Bowler @ 5.82 with 10 CRIC

Sean Abbott is, after all, the BBL’s top wicket-taker ever.

He doesn’t overcomplicate things, just bowling good lines and lengths that are almost Test match-like. Keep on doing that all day and you’ll inevitably take wickets.

And that’s what he’s been doing this season, just like he always does. He’s taken 19 in 13 matches, which is brilliant. And though that’s less than Kerr, Kerr played more matches, while their strike rates are very similar.

Abbott was at his best last time out against the Strikers, taking 3-27, crucial in his team’s win.

Kerr is likely to open the batting, remember, so will have to focus on that as much as his bowling.

Abbott is a highly experienced, big-match player and he could be in his element here.