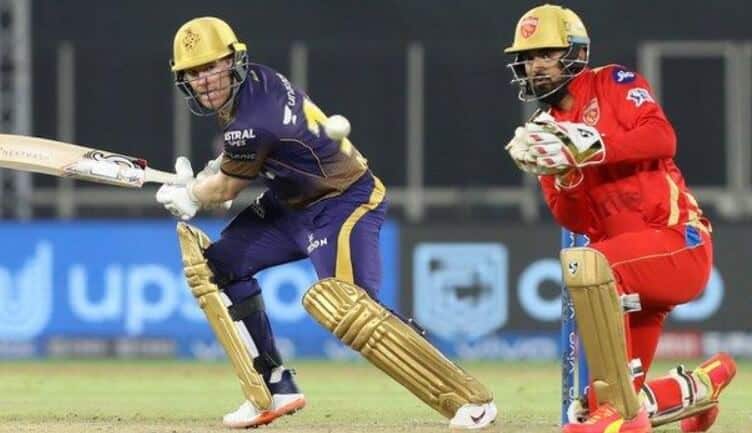 England and KKR skipper Eoin Morgan came up with a fine captain’s knock on Monday against the Punjab Kings to hand Kolkata just their second win of the campaign. It was an innings that was just as important for Morgan himself as it was for the team.

Morgan struck 47 off 40 including four fours and a six as the Kolkata Knight Riders chased down 124 for the loss of five wickets.

Morgan’s innings may not have seemed like such a big deal in terms of numbers but there were important circumstances at play.

For starters, it was a tough pitch where his 47 was the highest individual sco

re in the match. Then there was the fact that KKR were under huge pressure having lost their last four in a row.

At one stage they were 17/3 and looking like another collapse was on the cards before Morgan and Rahul Tripathi put on a good partnership with man-of-the-match Morgan staying around to finish the job while Tripathi was out for 41.

It was a typical Morgan knock where he mixed up controlled aggression with strike rotation, using all his experience by virtue of playing over 350 international matches, to get the job done.

The win was a much-needed boost for them, who have now gone into fifth after six matches.

It was very much-needed for Morgan, too. Prior to this match he’d scored 7, 29, 7 and 0. That last 0 was a golden duck without facing a ball after being run out by Tripathi at the weekend.

Equally worryingly, he’d had a lean spell against India in an ODI and T20I series, as well.

To the extent that some began wondering whether he justified his place in the side as an overseas player when the likes of Lockie Ferguson and Ben Cutting could really bring something to the table. He may well have bene dropped before if he hadn’t been skipper.

Delhi up next as KKR look to rebuild

Next up for Morgan and KKR is Thursday’s match against the fast-starting Delhi Capitals, led by the brilliant Rishabh Pant.

KKR have a 14-11 winning record against Delhi over the years though it was one win each when they played in the UAE last season.

KKR will be hoping that win over Punjab was the start of things to come while Morgan will just be happy to have got some runs under his belt. But he’ll need to keep on playing like that if KKR are still to salvage their season.