Two sides with contrasting results so far go to battle and it’s the Thunder who are the favourites to beat the Strikers. As they should be.

There will be tips on the match winner market, the toss market and then of course, there’s the usual Hot Bet.

So, everything you need to know before the action gets underway at the SCG in Sydney on January 2.

The best cricket betting tips are up next. The Thunder go into this match as hot favourites and as I’m about to explain, that’s with good reason.

The Strikers are really struggling and their loss to Chris Green’s men the other day won’t have done their confidence much good.

There’s also a good bet on the Thunder’s in-form bowler to be their top wicket-taker on the day.

And he’s at excellent odds to do that given what we’ve seen of him so far.

Plus, there’s my prediction of who might win the toss.

The Thunder are fresh from beating this lot.

That they did so without three important (players see below) is testament to the fact that this isn’t just a good team of XI players, it’s a good squad.

In other words, if injuries, positive Covid results or international call-ups scupper their plans, they have good options who can come in and do a good job.

Their three big heroes on the day against the Strikers were Jason Tanveer, Daniel Sams and Saqib Mahmood.

Sangha, who has been in excellent form since coming into the side, hit an unbeaten 91.

The Thunder are now sitting pretty in fourth place and won’t have given up hope for a Top 2 finish. At the very least, they should finish in the Top 4.

On the eve of that match against the Strikers, they lost Alex Ross, Alex Hales and Tanveer Sangha to positive Covid results.

Hales hasn’t been in particularly good form but is always a potential match-winner, while Ross has been his usual consistent self in the middle-order.

In terms of form, Sangha was arguably the biggest loss of the three. He’s been bowling beautifully all tournament.

All three will miss this match again as they recover.

Oliver Davies is likely to keep his place in the middle order, while Ben Cutting will probably be asked to open again, an unfamiliar role for him.

Jason Sangha is clearly in the form of his life.

He’s scored 39, 47, 56 and 91 since being left out for the first few matches of the season and it’s highly unlikely that they’re going to drop him after the way he’s batted since coming in.

Number three was a problem position for the Thunder after Callum Ferguson was surprisingly released at the end of the last campaign but in Sangha they may have a good solution for years to come.

He’ll be even more important than usual for them in this match with Hales and Ross out. It’s 5.53 with 10 CRIC that he top scores for them again, not a bad price considering his form.

Another game, another defeat for the Strikers.

They’re now in seventh place, just 1.5 points ahead of the Renegades, who got 1.5 points after their match against the Sixers was called off due to persistent rain.

A Playoff place looks a long, long way off.

It’s a far cry from the team who won this tournament a few years ago and that with Rashid Khan a long-term signing, looked like it could be a dominant force for years to come.

And we’ve said it before, but we’ll say it again: we know they lost their best two batsmen in Travis Head and Alex Carey but they shouldn’t have been so reliant on two players in the first place.

It’s hard to see how things are going to get any better for the Strikers.

Sadly, there’s not much the Strikers can do to improve their fortunes. It’s not as if they have good options on the bench who can come in and change things around.

What they could however do is drop George Garton. It seems a strange move to not play an overseas player but he really has been disappointing.

He came in with a big reputation after impressing in the T20 Blast and The Hundred but hasn’t got going. He’s been incredibly expensive and has also struggled to score runs.

Wes Agar isn’t at the same level as last year but at least he takes wickets. But they’ll probably stick with Garton one last time.

Wells has done his best for the cause.

Just 1.70m and not particularly strong, he’s made the most of his game over the years. He’s good at nurdling it into gaps, running hard and finding the odd boundary.

The problem is he needs others to take more risks around him while he plays the anchor role. And no-one seems prepared to do that.

Last time out he hit a fine 46 off 26 but as per usual, didn’t get the support he needed.

Things are pretty tight between these two. After their win the other day, the Thunder are now 8-7 up. 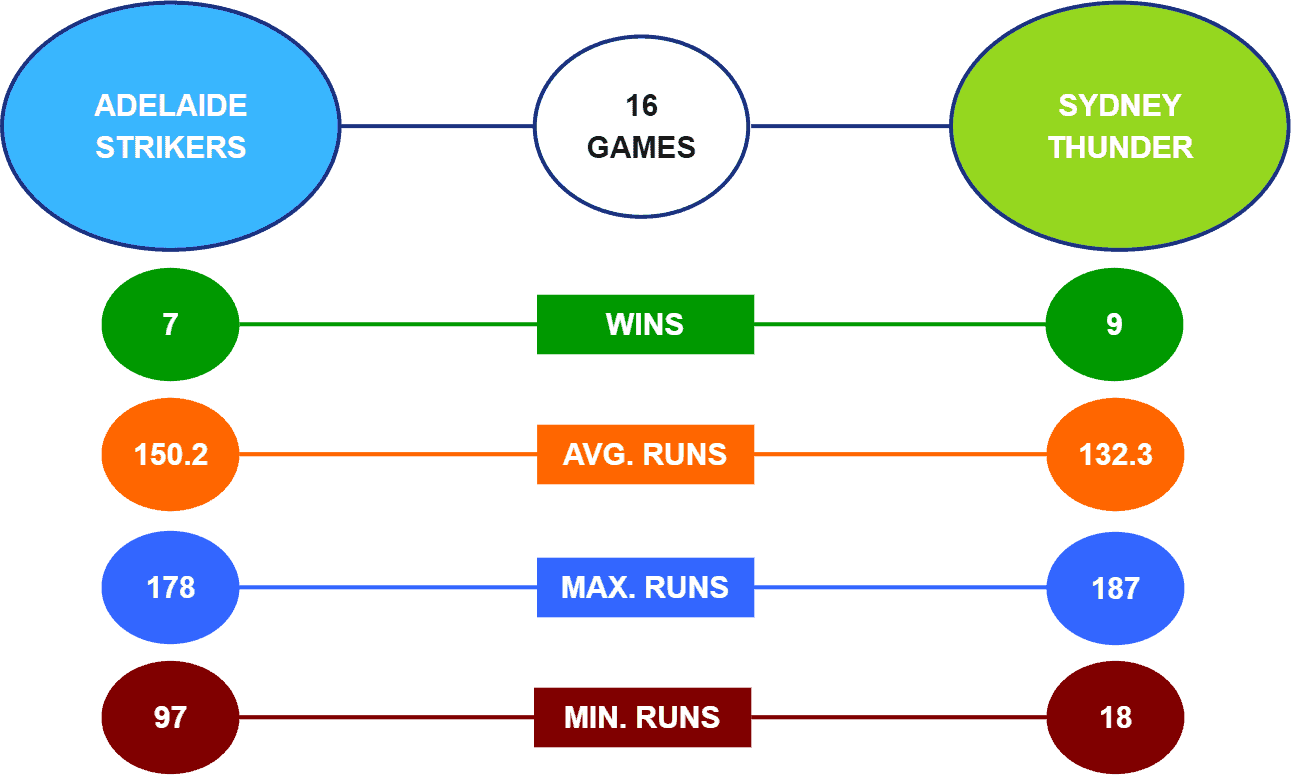 Time to look at the Thunder v Strikers toss winner statistics. The Sixers are pretty far ahead in this regard, as well. But I have a feeling the Strikers can at least win the toss this time, if not the game.

Recommended Bet: Back the Sydney Thunder to win @ 1.66 with Betway

As I’ve said already, the Thunder will be missing three important players for this match.

But then again, those three were also missing the other day and the Thunder still won pretty comfortably.

There’s a big gulf in quality between these two sides this year. Look at it his way: how many Strikers players would get  into the Thunder’s team? Rashid Khan, yes. Maybe Wells. But that’s about it and that tells its own story.

In the likes of Saqib Mahmood, Jason Sangha and Sam Billings the Thunder have some seriously in-form players. The Strikers don’t have anyone making stand-out performances.

Obvious as it sounds, we simply have to side with the Thunder.

Hot Bet: Back Saqib Mahmood to be Thunder Top Bowler @ 6.09 with 10CRIC

I’ve already mentioned Saqib Mahmood as one of the reasons the Thunder have been going well this tournament.

The English pace bowler has taken nine wickets in just four games, which is outstanding. It’s a barely believable strike rate of 10.

Daniel Sams has 11 but then again, he’s played three more matches than him.

Mahmood has quickly adapted to Australian conditions and has been good every game so far.

He’s available at big odds to be their top wicket-taker, at 6.09.