After the very best and also very free T20 World Cup betting tips for the West Indies v Bangladesh game? Of course you are. It’s a huge game that could signal the end of the Windies’ campaign in terms of progressing.

Here you’ll find a summary of how both teams did in their previous match, the likely line-ups for both sides, a pitch report and some good stats. If you’re looking for cricket online betting action, you’re about to get it so just keep on reading!

The game takes place at Sharjah on Friday, October 29, start time 3:30 pm IST. Up next are our West Indies vs Bangladesh betting tips!

Today’s West Indies v Bangladesh betting odds have the Windies as favourites. We have lots of issues with the Windies but even more with Bangladesh and batting power definitely gives the defending champions the edge.

So that’s who we’re going with. There are also cricket betting tips on the toss winner and I’ve picked a top West Indies bowler to round things off.

There’s no need to explain everything that’s gone wrong with the Windies so far because in this article, I’ve done just that.

Have a read and maybe you’ll agree with my assessment regarding team tactics, how they picked the wrong players and what they need to do to have any chance of still making the semis.

Speaking of which, to make the semis they’ll need to win every single game from here, probably have to drastically improve their net run rate and also hope other results go their way.

Far from straightforward, that’s for sure. But what is worth discussing here are the changes they need to make.

They need to drop Lendl Simmons, who was more responsible than anyone for that loss to South Africa after his appalling and painstakingly slow innings. He didn’t hit a boundary in 35 balls.

Andre Fletcher needs to come in for him. And they need to drop either Nicholas Pooran or Shimron Hetmyer for Roston Chase.

Pooran is also the wicket-keeper but that’s no problem because so is Fletcher and he could take over the gloves.

Two games, two losses. In truth, it was pretty much game over against England as soon as they lost the toss and were forced to bat.

That Mushfiqur Rahim (for the second game running) top scored with just 29 tells its own story. He was the only batter who seemed comfortable with the wicket at any stage and even then his strike rate was just 96.66.

And for the second game running Shakib Al-Hasan didn’t come to the party with the bat. On the one hand it’s a bit much to expect him to shine every time he plays.

On the other hand, when you’re lacking star players, you really do need the ones you have to be at their best. Nasum Ahmed was the best of a bad bunch with 19 off 9 balls with the bat and the wicket of Jos Buttler.

Soumya Sarkar and Rubel Hossein might get a game. They have little to lose by letting them improve the team’s fortunes.

There have been two high scoring encounters here at Sharjah so far. There was the 171 posted by Bangladesh themselves, chased by Sri Lanka, and there was the mammoth 190 posted by Afghanistan. Not chased by Scotland.

Then again, that was against a weak bowling attack. And then on Tuesday we had New Zealand crawl to 134 and Pakistan having a wobble in chasing it but getting there in the end.

Here’s our guide to Sharjah if you want to know more about it.

At first glance, I was incredibly surprised by how close the head-to-head is between these two. The Windies are ‘just’ 6-5. They’re double World Champions, Bangladesh are perennial strugglers in this format.

Then again, Bangladesh have only ever played once in the Caribbean so it’s perhaps not that big a surprise that the Tigers have matched the West Indies in their own conditions. 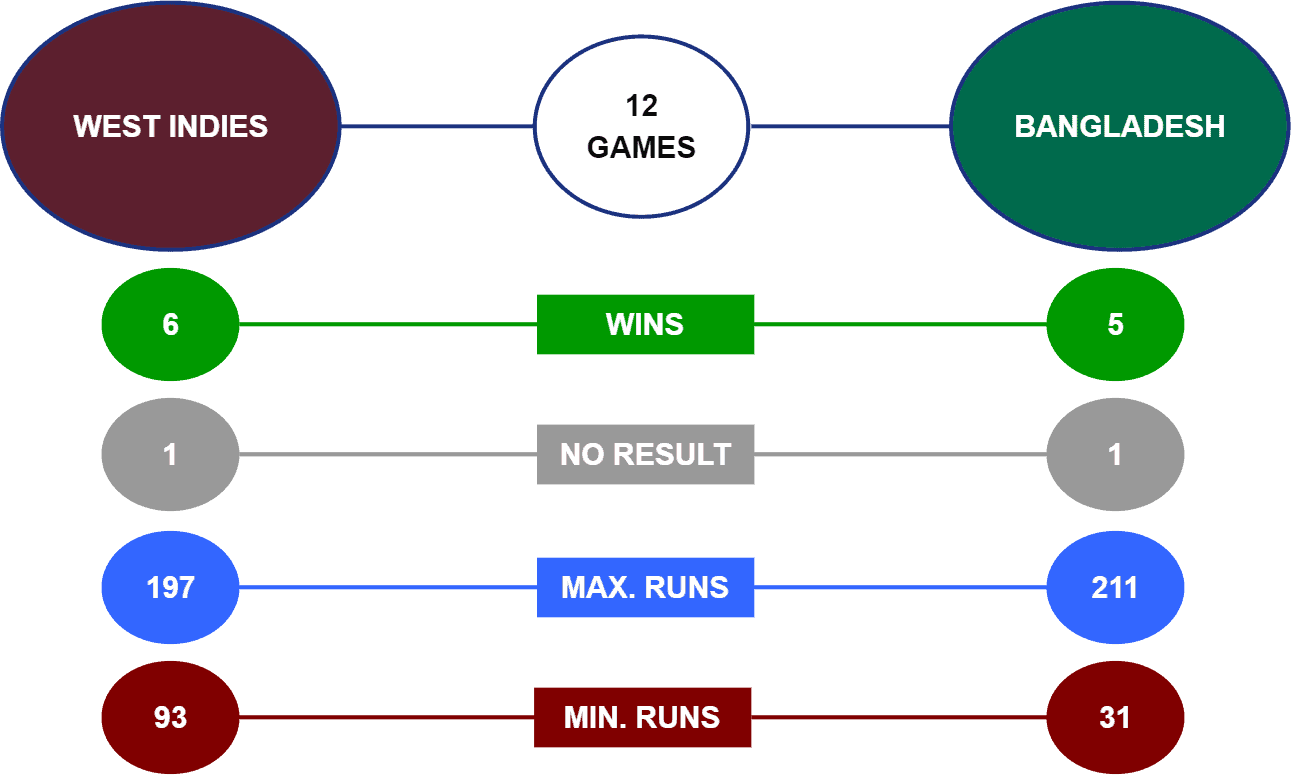 Let’s look at West Indies v Bangladesh toss winner statistics. If the Windies are slightly ahead on the wins, then Bangladesh are miles ahead on toss wins.

They’ve won two for every one that the Windies have won. Show faith in the Tigers to win this one.

The way they’ve played so far, I wouldn’t necessarily be fancying the Windies against many teams.

I’d go as far as saying that if Bangladesh win the toss and get to bat second, they might be a decent bet because of the toss bias that ‘almost’ guarantees you win the game if you’re allowed to chase.

Having said that, given the purpose of this preview is to pick a team pe-toss, it’s going to have to be the Windies.

Sooner or later their big hitters will come good to an extent and that’s just too much power for Bangladesh, who really have struggled to hit boundaries in their first two games.

If you look at how Afghanistan dismantled Scotland here at Sharjah, it was the spinners Rashid Khan and Mujeeb Ur Rahman who did the damage.

That would be Akeal Hossein, the only man to have taken a wicket against SA (the other wicket to fall was a run-out) and the man who bowled beautifully against England, returning figures of 2-24.

So here’s their leading wicket-taker on a turning track who’s guaranteed 4 overs. That makes the 4.3 very appealing.