After the very best and also very free T20 World Cup betting tips for the West Indies vs Sri Lanka game? Of course you are. Here you’ll find a summary of how both teams did in their previous match, the likely line-ups for both sides, a pitch report and some good stats.

If you’re looking for online cricket betting action, you’re about to get it so just keep on reading! The game takes place at Abu Dhabi on Thursday, November 4, start time 7:30 pm IST. Up next are my West Indies vs Sri Lanka betting tips!

Today’s West Indies vs Sri Lanka betting odds have the West Indies as red-hot favourites. I’ll explain why those odds are justified, why the Windies are far more motivated and should win this one to have an outside chance of still making the semis.

There are also cricket betting tips on the toss winner and I’ve picked an extremely consistent Windies bowler to round things off for a top bowler bet.

These West Indies vs Sri Lanka betting tips are free and exclusive to Indian readers!

What a surprise. When the West Indies finally played Roston Chase, they finally won a game.

That was the inclusion I’d been calling for after their first two defeats where they didn’t play him and lacked someone in the middle order who played calmly and sensibly rather than going for broke.

Sure, 39 off 46 may not seem like much. It may actually seem pretty slow-scoring but it needs to be put into context.

They won the game by three runs so you can see how important that knock was. Besides, the whole point of his inclusion was that others could take risks around him and that he was just meant to bat sensibly.

Others such as Nicholas Pooran, who smashed 40 off 22 batting at number seven and was named man of the match.

But as vital as anyone in their narrow win over Bangladesh was Jason Holder. He came in for the injured Oshane Thomas, scored 15 off 5, took a wicket and  conceded just 22 runs.

And then he took an excellent catch on the boundary. Had he dropped it and it could have been game over.

Plenty of work still to do. They’ll need to win this one comfortably, win the last one against Australia and then hope England beat South Africa. Even then, it might not be enough.

Sri Lanka came a lot closer than the likes of the West Indies, Bangladesh and Australia did to beating England.

Set 164 to win, they didn’t look like getting anywhere that total after a steady loss of wickets.

At one stage they almost traded as favourites in Live Betting when they were closing in on that total.

But once Hasaranga and Sahnaka got out, the game was up and in the end they fell 26 runs short. But they gave England a mighty scare.

Hasranga by the way is a real candidate for Player of the Tournament. He won’t get it because Sri Lanka are now out after South Africa beat Bangladesh, so his side won’t make the semis.

But there’s not much more he could have done. His 14 wickets in seven games is three more than anyone else has managed so far, and he’s also contributed with 119 runs.

They could bring in Dinesh Chandimal for Avishka Fernando, who has been poor with the bat. But it’s all a bit too little, too late.

Abu Dhabi can be made to look like a far trickier wicket than it actually is. While the likes of Bangladesh failed to get anymore than 84, Afghanistan got to 160 and Pakistan hit 189/2.

Having said that, Pakistan found it hard going for the first 10 overs against Namibia and only an excellent cameo of 32 off 16 from Mohammad Hafeez, plus a superb 79 off 50 including 24 off the last over from Mohammad Rizwan got them to such a big total.

By the way, it’s  a good thing Rizwan did get those late runs because he provided us with a chunky winner at 5.0 on him being the top match batsman, just pipping Azam’s 70 right on the line.

Either way, the conclusion is that weak batting line-ups will struggle here but stronger ones can get to 160 or more.

The winning captain will want to chase, which is what both sides prefer doing and what has led to the most wins so far this tournament.

Here’s what you need to know about Abu Dhabi.

It’s 7-7 over the years between the two former World Cup winners. But it’s been all Windies over the past few games, who won six out of the last seven, a good indication of how the Windies have gotten better and better over the last few years (this tournament aside).

And how Sri Lanka are nowhere near the side they were five or six years ago. Back in March of this year, West Indies won 2-1 at home. 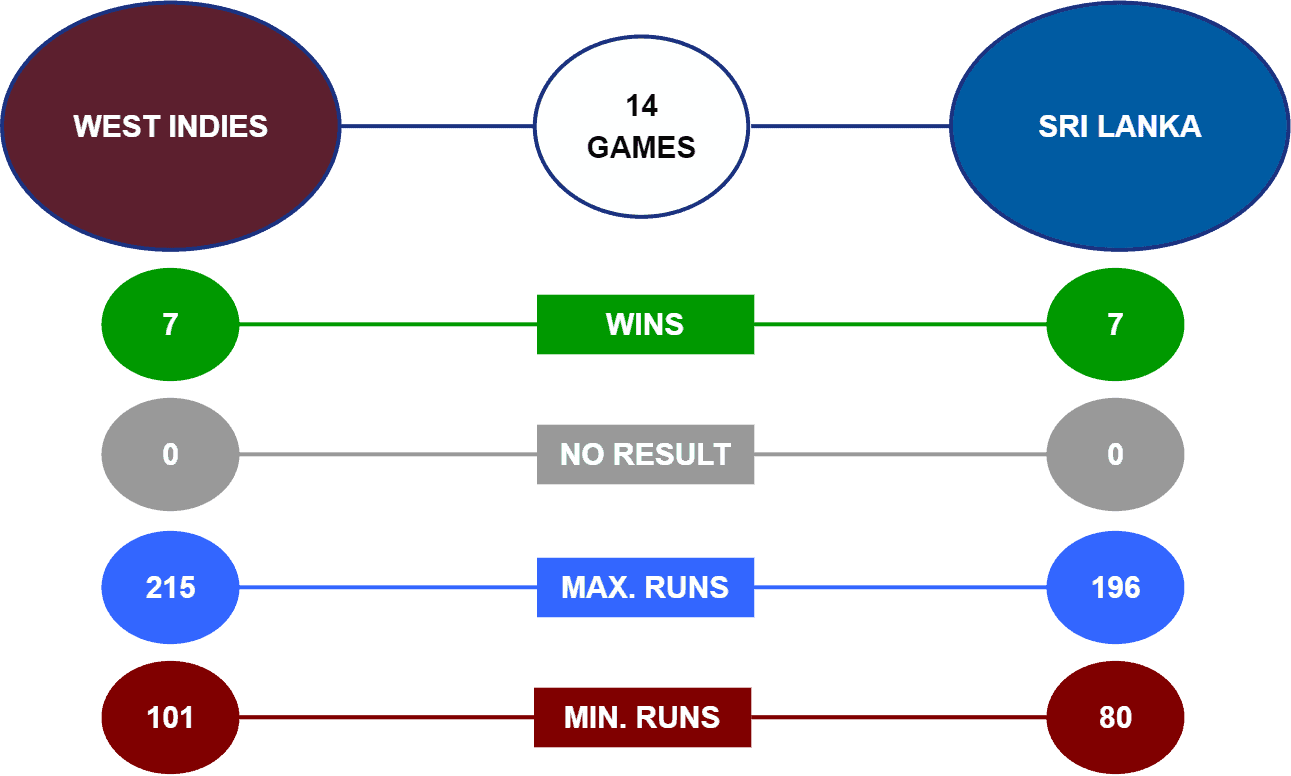 Let’s talk West Indies vs Sri Lanka toss winner statistics. The Windies have had the better of things when it comes to the toss, winning 10 out of 14.

They certainly haven’t been fortunate with the toss, this World Cup, which is one of the reasons why they’ve struggled. But their record in this game when it comes to the toss means we have to go with the Windies.

The main reason why I fancy the Windies here is the difference in motivation levels.

Sri Lanka are out, they can’t qualify from here after just one win in four, which was secured over Bangladesh.

As explained already, the Windies have it all to do but at least they’ll be desperate to win this game, aim to beat South Africa after this one and then see what happens.

But it’s also true that the Windies have been unfortunate with the toss.

They’d love to have chased in all three games. Had they chased against England they surely wouldn’t have lost by such a big margin and they may well have beaten South Africa.

If they get to bowl first and restrict the Lankans to 150 or less, they’ll be very confident they can chase that.

They also held their nerve against Bangladesh defending, with Andre Russell bowling a dot ball off the final delivery of the game to win it.

So it may not be all about the toss and quite simply, they have more batting power and more batsmen who can take the game away from you.

If the Windies had picked Jason Holder from the start, they may well have been in a very different position right now.

He’s accurate and takes wickets with the ball, he can smash sixes at number 8 and he’s an excellent fileder, especially on the boundary.

This shouldn’t come as any news to anyone because in an awful season for Sunrisers Hyderabad in the IPL, he was one of the few players who came out of it with any credit.

You could make a case for him to be man of the match at 13.0 but I’ll play it a bit more conservatively and go with him to be top Windies bowler at 4.75.

He looked sharp against Bangladesh and his extra height could bother the Sri Lankan batsmen.