There’s more Big Bash betting to look forward to but sadly, another one where Covid will play a big part when the Melbourne Renegades play the Brisbane Heat at Geelong on Thursday, January 6.

In addition to the team news, head-to-head record, pitch report and important stats, we also have the top Renegades vs Heat betting tips coming up next.

If you’re looking for online cricket betting opportunities for the game, then read on!

The best cricket betting tips are up next ahead of this BBL clash between Renegades and Heat. We’re at Geelong for this one but the venue or head to heads aren’t nearly as important as the team news.

With most of the Heat’s players out with Covid, the Renegades should really go on to win but I’ll tell you what’s the best method to bet on them.

But there won’t be a Hot Bet because the bookies aren’t offering odds on individual players as a result of the Covid situation.

The Renegades secured an extremely rare victory over their cross-city rivals the Stars.

They’ve been on the receiving end of plenty of losses to Glenn Maxwell’s side over the years but were extremely fortunate to play a side missing seven or eight first-choice players.

Still, give credit where it’s due. It’s one thing knowing your opponents are depleted, it’s another going out and being ruthless about it.

Yes, the Stars’ batting line-up was almost unrecognisable from the one that normally turns out but you still have to go out there, bowl well, take your catches and do the basics right.

They restricted the Stars to just 126, which they chased with ease.

Kane Richardson took 3-24 and walked away with the man of the match award but you have to wonder why it didn’t go to Nic Maddinson. The skipper took 3-20 and that included dismissing all of the Top 3 in the Stars’ batting order.

Maddinson has been a revelation with the ball. Very much a part-timer bowling left-arm spin, he’s taken five wickets in just nine overs this BBL, at a remarkable strike rate of 10.8.

It’s a big bonus that he’s chipping in with wickets and if he can start scoring some runs, he will have justified the Renegades’ decision to bring him in from the Stars to lead the side.

The win allowed them to move off the bottom spot but there’s still a lot of work to do if they’re to make the Playoffs.

English fast bowler Reece Topley has played his last game for the Renegades and will now return to the UK in preparation for a tour of the West Indies.

Topley had a decent if unspectacular stint, taking nine wickets in eight games, saving his best performance for last. He took 3/27 against the Stars but was a bit expensive in his eight games, going at 8.38 for the season.

As is the case with the other English players leaving early, the Renegades are unlikely to replace him at short notice.

Fellow fast bowler James Pattinson missed out last time after testing positive but should be back to take Topley’s place.

Whatever happens from hereon, Aaron Finch was the man who captained Australia to their first-ever T20 World Cup.

But he’ll want to make an impact in the BBL as well this year. He gave up the captaincy to focus on his batting and missed a couple of matches at the start of the season as he recovered from injury.

It’s worth remembering that he’s the BBL’s second highest runscorer just behind Chris Lynn, so  has had plenty of success in this competition in the past, at least on an individual level.

Now with the impressive Shaun Marsh back in the side, plus Sam Harper and Maddinson, they finally have a decent top order.

The Heat had their match against the Sixers postponed the other day after there were 12 positive cases of Covid among the players.

The two extra days have given the Heat the chance to call up other players not originally in the squad, such as players currently featuring in grade cricket in Brisbane.

But the BBL must go on- whether it’s actually completed in the end or not- so they’ll have to play this one.

They’re currently fifth on 14 points so have a chance of making the Playoffs but let’s see how badly hit they are by Covid over the next two games.

At present, there’s no information about which players tested positive. Heat fans will be hoping that most of them were fringe players rather than their main men because  this isn’t the deepest squad in terms of quality.

All five of those have been really good so far this season.

Englishman Tom Abell has gone home injured so the Heat have brought in Fakhar Zahman in but for just three games.

Zaman was a bit of a late bloomer to international cricket, only making his debut for Pakistan aged 27.

He’s only played three Tests so far but has already racked up 53 ODI appearances and 64 T20Is.

His ODI numbers are excellent but his T20 career hasn’t been quite as good with just seven fifties in 64 games and an average of 22, although his strike rate of 131 is extremely impressive.

Normally an opener, he batted at three for Pakistan at the recent World Cup so it will be interesting to see what position the Heat bat him in.

No information at present.

This is the first match of the season at Geelong so there’s really not much to go by.

But in those three, the Renegades lost the lot of them so it’s obviously not a happy hunting ground for them.

The forecast isn’t great so it could be a rain-reduced affair.

Let’s look at the Renegades vs Heat head-to-head. The Renegades are 10-6 up over the years, which is a bit surprising. But the Heat won the last game between these two played earlier this season, chasing 141.

And they also won the two before that. 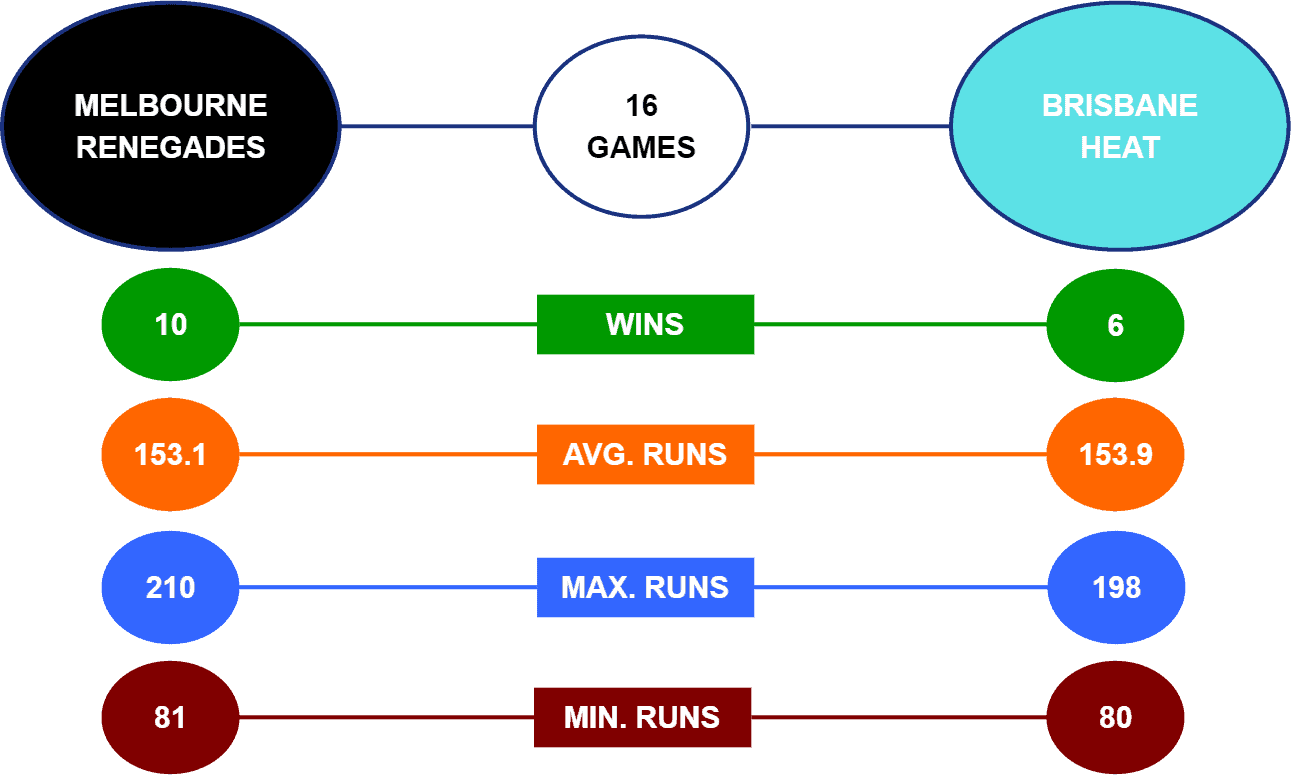 Time to look at the Renegades vs Heat toss winner statistics. The Heat have had the better of the toss over the years so let’s go with them to win it again.

Recommended Bet: Back the Renegades to win @ 1.8 with Betway

The advice here is to…not bet!

At least until we know exactly which Heat players are out. Until we know that, recent form, head- to-heads and everything else are pretty much irrelevant.

But if you really want to anyway, the advice is to try to get with the Renegades at 1.8 or higher in LiveBet.

A pre-toss price of 1.31 is just too short for a team who had only won one match all season before that win over a depleted Stars team the other day.

In other words, they simply can’t be trusted at such short odds.

But if the Heat get off to a decent start and the Renegades reach 1.8, that might be a good bet because the Renegades’ extra class in terms of players should make a difference sooner or later.

But if you’re not convinced by that rationale, then don’t bet at all. Sometimes not having a bet is the right bet.

Here’s our Betway review, by the way, where you can see why they’re one of our recommended sites.