More BBL betting to look forward to as the Melbourne Renegades try to get a win that could help them avoid finishing rock bottom, against a decent Hurricanes’ side. There’s exciting news by the way: we should finally see Indian player Unmukt Chand making his Big Bash debut!

In addition to the team news, head-to-head record, pitch report and important stats, we also have the top Renegades v Hurricanes betting tips coming up next. All in all, you’ll have everything you need to know before it gets underway.

The best cricket betting tips are up next ahead of this BBL clash between the Renegades v Hurricanes. We’re at the Melbourne Docklands for this one, which is normally a high-scoring ground, so we may well get plenty of runs here.

After being really fortunate to have played cross-city rivals the Stars when they were missing half their team because of Covid, the Renegades then played a full-strength Stars side and lost convincingly.

They’ve been poor this season, guilty of batting collapses, dropped catches and wayward bowling. But that’s nothing new.

Barring one season when they won the BBL against all odds, with the Stars guilty of a horrible meltdown in the final, they’ve always been extremely poor. The best they can hope for now is avoiding a rock bottom finish. Yes, another one.

They could do with making some big changes to their squad ahead of next season.

Now to the news we’ve all been waiting for! Unmukat Chand is likely to make his debut for the Renegades at last!

For 12 matches he’s been left out with others preferred, at one point Tweeting that his stint in the BBL ‘felt like a holiday’. You can read all about Unmukt Chand right here.

But there are reasons for his inclusion. Skipper Nic Maddinson is out with a hamstring injury and youngsters McKenzie Harvey and Jake Fraser-McGurk have Covid.

So sadly, you could argue that he’s been included because the Renegades have little else to turn to. Never mind.

Their best bowler, Kane Richardson, will be absent for family reasons.

From leading Australia to a T20 World Cup win against all odds to being in a BBL side that looks like they’ll finish bottom.

At least he can say he wasn’t in charge of it, having resigned the captaincy before the season began.

Having missed three games at the start of the season he’s scored 229 runs at an average of 28.

Ok but not what you’d expect from a man who was once ranked the Number 1 batsman in T20 cricket.

It’s 4.63 with 10CRIC that he’s their top batsman in the match for a second consecutive game.

The good news for the Hurricanes is that with two wins from their past four games, a Playoff place is just about still in their hands.

But an unexpected excellent finish to the season by the Adelaide Strikers means they’ll probably have to win at least one of their two remaining matches in order to be sure of a Top 5 finish.

They were good last time out, getting to a decent score mostly down to a brilliant 83 from returning skipper Matthew Wade.

Then Jordan Thompson and Riley Meredith each took three wickets to just about keep the Thunder out and keep themselves in the hunt.

What’s odd is their tinkering with their batting line-up.

For years it’s been Wade and D’Arcy Short at the top of the order but given the brilliant form of BBL top runscorer Ben McDermott, they’ve preferred to open with him.

But quite why Caleb Jewell has been opening with McDermott, meaning Wade and Short have been coming in at three and four… is anyone’s guess.

Unlike other sides who keep losing English, Afghan and Pakistan players to international call-ups, the Hurricanes know their two overseas players are going nowhere.

Nepalese import Sandeep Lamichhane and Englishman Jordan Thompson (not selected by England) will be around for the rest of the tournament.

Given it may be close in terms of the Hurricanes making or not making the Playoffs, we’ll have to wait and see how long their campaign goes on for.

It’s been a strange tournament for Short.

He’s been an opener for the past few seasons, top-scoring in the Bash for one of them, and now seems to be viewed more as a genuine all-rounder, ‘demoted’ to three, four or five and nowling a lot more than in past campaigns.

Despite hitting just one fifty, his 310 runs for the season are a good effort, considering he hasn’t been opening of late.

Five wickets in 12 matches isn’t spectacular but look at that economy rate: 7.47. Only Lamichhane’s economy rate is slightly better of anyone in the side.

His value to the side is therefore big and big-time player he is, he may just shine when it matters most.

Melbourne Docklands has been one of the highest-scoring grounds in the BBL this year.

Three teams passed over 200 here batting first and that included a century being scored.

All that changed when the Renegades batted first against the Stars, posting just 122.

That the Stars chased that with more than five overs to spare suggests that was just a shocking batting performance from the Renegades, rather than any issues with the wicket.

So the smart money is on the Hurricanes getting 180+ if they bat first.

But it may pay off to go with the Renegades posting less than 160 should they bat first, such have been their troubles with the bat.

Perhaps not that much of a surprise considering these two have been two of the BBL’s big strugglers; you could say they’re as bad as each other.

The Hurricanes won when they played earlier this season after posting 206; the Renegades were all out for just 121. 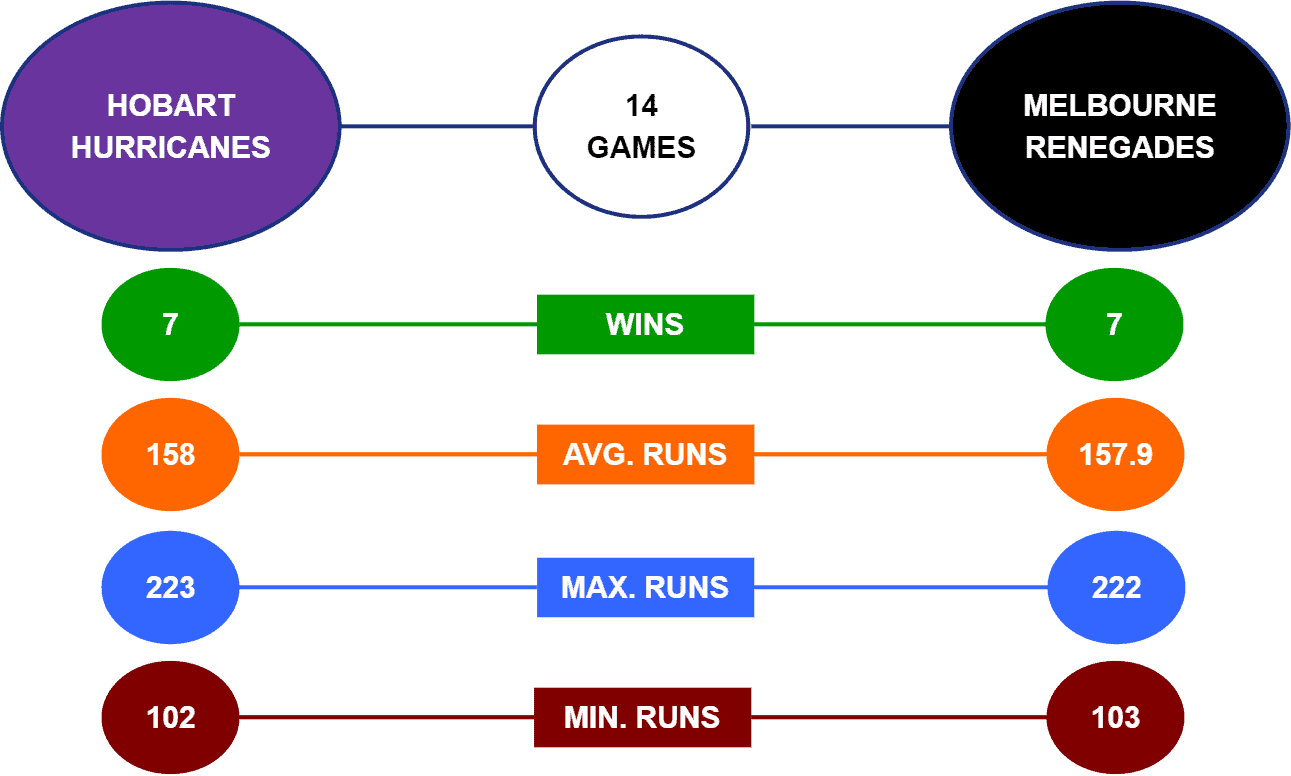 Time to look at the Renegades v Hurricanes toss winner statistics. If only the Renegades were as good once the game got underway as they were at the toss.  A 71% win rate on the coin flip is excellent and we’re going with them to win it again.

Recommended Bet: Back the Hurricanes to win @ 1.57 with Pure Win

As if the Renegades weren’t poor enough when they have a full squad, they’ve now lost no fewer than four important players.

In addition to that, they know they can’t qualify for the Playoffs, so motivation levels will be low.

They’re also on a three-match losing streak and up against a side absolutely desperate for a win that can take them closer to the Playoffs.

If despite all that, the Renegades manage to beat the Hurricanes, good on them. But I can’t see it happening.

Recommended Bet: Back Zahir Khan to be Renegades top bowler @ 6.31 with 10CRIC

One of the tricks of successful betting is taking advantage of mistakes from bookmakers. And here’s an example.

Kane Richardson is favourite at 5.66 to be the Renegades’ top bowler with 10CRIC. As he should be. He’s their best bowler and has the most wickets for them this season: 19.

Except, as we’ve already established, he’s not playing.

But because he’s favourite on the market, other bowlers are longer odds than him than they should be. Such as Zahir Khan, their second best bowler, who has 12 wickets and is available at 6.31 and should be about 4.5.

So we go with Khan.