Looking for BBL betting tips for Stars vs Thunder? You’ve come to the right place! The Thunder are looking to make it two from two, the Stars are looking to get their first points on the board after that disastrous defeat to the Sixers at the weekend.

In addition to the team news, head-to-head record, pitch report and important stats, we also have the top Stars v Thunder betting tips coming up next.

There will be tips on the match winner market, the toss market and we’ve picked a T20 World Cup winner to take the most wickets for the Stars. So, everything you need to know before the action gets underway at the MCG, in Melbourne on December 10th.

The best cricket betting tips are up next. The Stars go in as favourites but I’m not sure that’s right after what’s happened so far and given the available team news. The Stars may just be missing lots of stars!

So the Thunder it is but the Stars’ classiest bowler can also make an impact at decent odds.

The Stars couldn’t have got off to a worse start against the Sixers on Sunday.

They conceded far too many and then put in a really poor batting performance where no-one got going at all.

No side will ever be near their best with four important players out injured.

But poor starts to the tournament can cost you and having been quite fancied at the start, they don’t want to rule themselves out of a Top 2 Group Stage finish early on.

News on the fitness of the four just mentioned is thin on the ground so we’ll have to wait and see. Of the four, Stoinis and Burns may be the ones most likely to feature.

The huge news of course is that they’ll have Andre Russell available.

The Windies all-rounder signed a short-term deal to play just five matches for them, will have done his quarantine period by Friday and should come straight into the action.

Expect him to bat at five. Let’s see how many overs he can get through; the more, the better as far as they’re concerned.

Things didn’t start as he would have liked for Joe Clarke against the Sixers. He played a lazy shot and was caught at gully for just 1, off the bowling of Steve O’Keefe.

But his T20 numbers are excellent: 94 games have seen him score three centuries and 12 fifties, all at a strike rate of 155, which is right up there with the very best in the game.

He was one of the three players we tipped for BBL top batsman honours and he may just need one good innings to really get going and make a splash.

Betway make him 3.75 to top score for the Stars. If there’s no Stoinis again, he could go very close.

They reduced the Heat to 140/8 thanks to some fine bowling from Daniel Sams and Gurinder Sandhu, who took five wickets between them. It was a total that was never going to be enough.

But the Thunder recovered well after the early loss of star batter Alex Hales. It was a rare failure for last year’s top runscorer, who went for 0.

It was then left to Alex Ross (61) and Sam Billings (44) to form a good partnership to get them home.

So an excellent start to the campaign and one that will give them confidence.

Cricket Australia are being a bit cagey about what will happen with the members of the Ashes squad not picked for the First Test.

One of those is of course Usman Khawaja, the Thunder skipper. He was left out in favour of Travis Head, who hit a brilliant century on day two of he First test so is highly likely to keep his place.

But Khawaja may yet be a surprise inclusion as an opener in the place of the struggling Marcus Harris, so they’re unlikely to release him to play in the Bash.

English fast bowler Saqib Mahmood missed out last game but may be ready to go here.

They didn’t need much from Cutting in that first game.

He only bowled one over (going for 10) and was chalked to come in at seven, but wasn’t needed.

They’ll need his smart and disciplined bowling and savage hitting at some stage. And this could be the game where he makes a far bigger impact.

We’re at the iconic MCG for this one. And you know what that means: big boundaries and huge outfields so batsmen will need to be prepared to run lots of twos and threes if they’re not able to find the boundary.

The Stars may decide to bat first after what happened on Sunday.

The Thunder look well-equipped to do either so stand-in skipper Chris Green won’t be too fussed if he loses the toss.

The Stars are 8-7 up on the head to head. That’s probably what you’d expect from two sides who have performed to similar levels over the years in the Bash. It was one-win-a-piece last year.

The Thunder posted a monster 219 which the Stars never looked like chasing but in the game before that, the Stars had set them 169, which the Thunder fell short of. 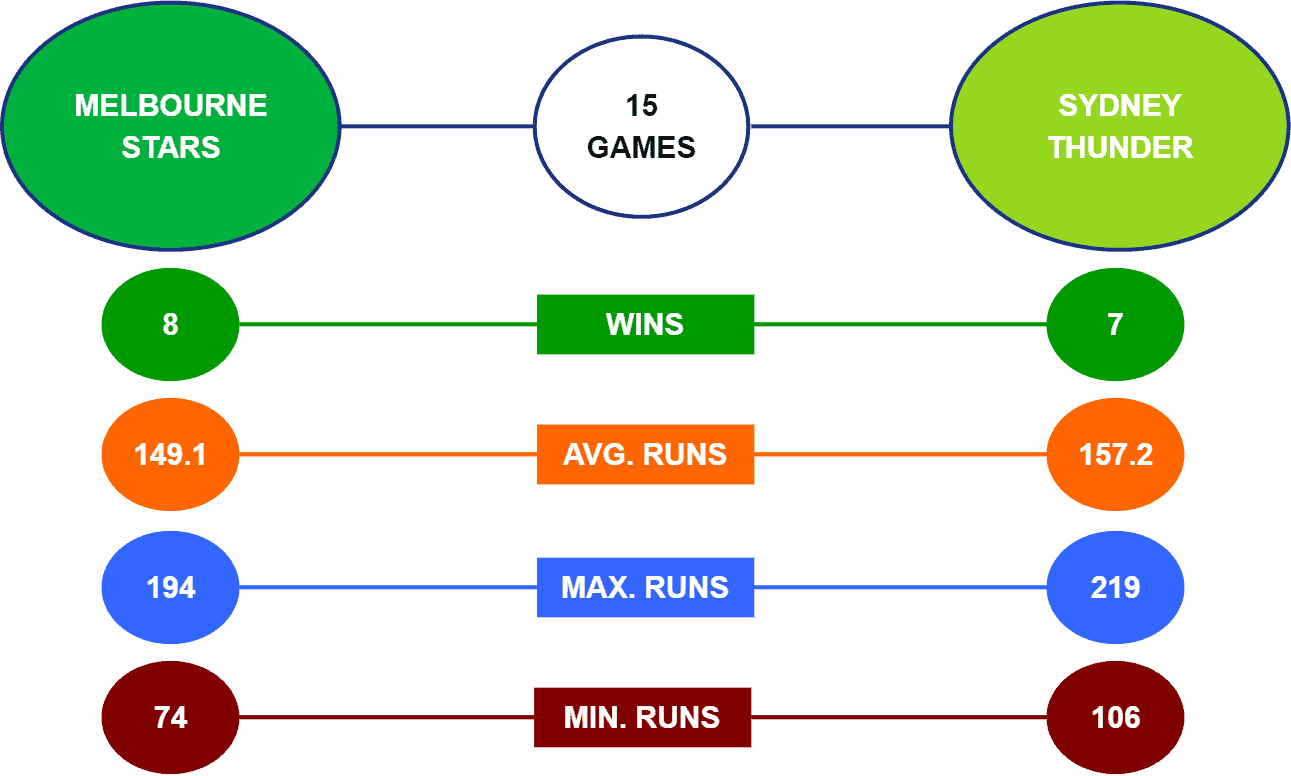 Time to look at the Stars v Thunder toss winner statistics. Things are as tight as they could be here, the Stars ahead by just one toss. They won it on Sunday against the Sixers and could go two from two here.

Recommended Bet: Back the Sydney Thunder @ 2.04 with 10CRIC

The Thunder are the bet here. There’s little or nothing to choose between them on the head to head, both long-term or in the last couple of seasons.

And yes, the Stars are at home for this one but the key here could be the availability of personnel for both teams.

The absence of Khawaja is a big blow to the Thunder and to a lesser extent, so is Davies.

But despite the likely inclusion of Russell, the Stars are missing far more important players because they could be without as many as four.

And they could struggle here against a team whose bowling was very sharp and the other day and whose batting was very clinical.

Go with the Thunder as outsiders.

Zampa didn’t have a particularly great game the other day, going for 34 runs without taking a wicket.

But then again, no-one had much joy with the ball that day for the Stars, which is why they conceded 213 runs.

But Zampa is the real class act here and one of the key reasons why Australia won the World Cup.

His BBL record is very strong and particularly at the MCG.

With Coulter-Nile still out and Russell somewhat unlikely to bowl his four overs, he may not have too much to beat.